During an Oct. 20 dedication service and reception, the United Methodist Board of Global Ministries officially marked its new status as an Atlanta institution.

The establishment of the mission agency’s headquarters and U.S. regional office in the renovated buildings of Grace United Methodist Church, 458 Ponce De Leon Ave. NE, is the result of an October 2014 decision to move from its longtime home in New York. 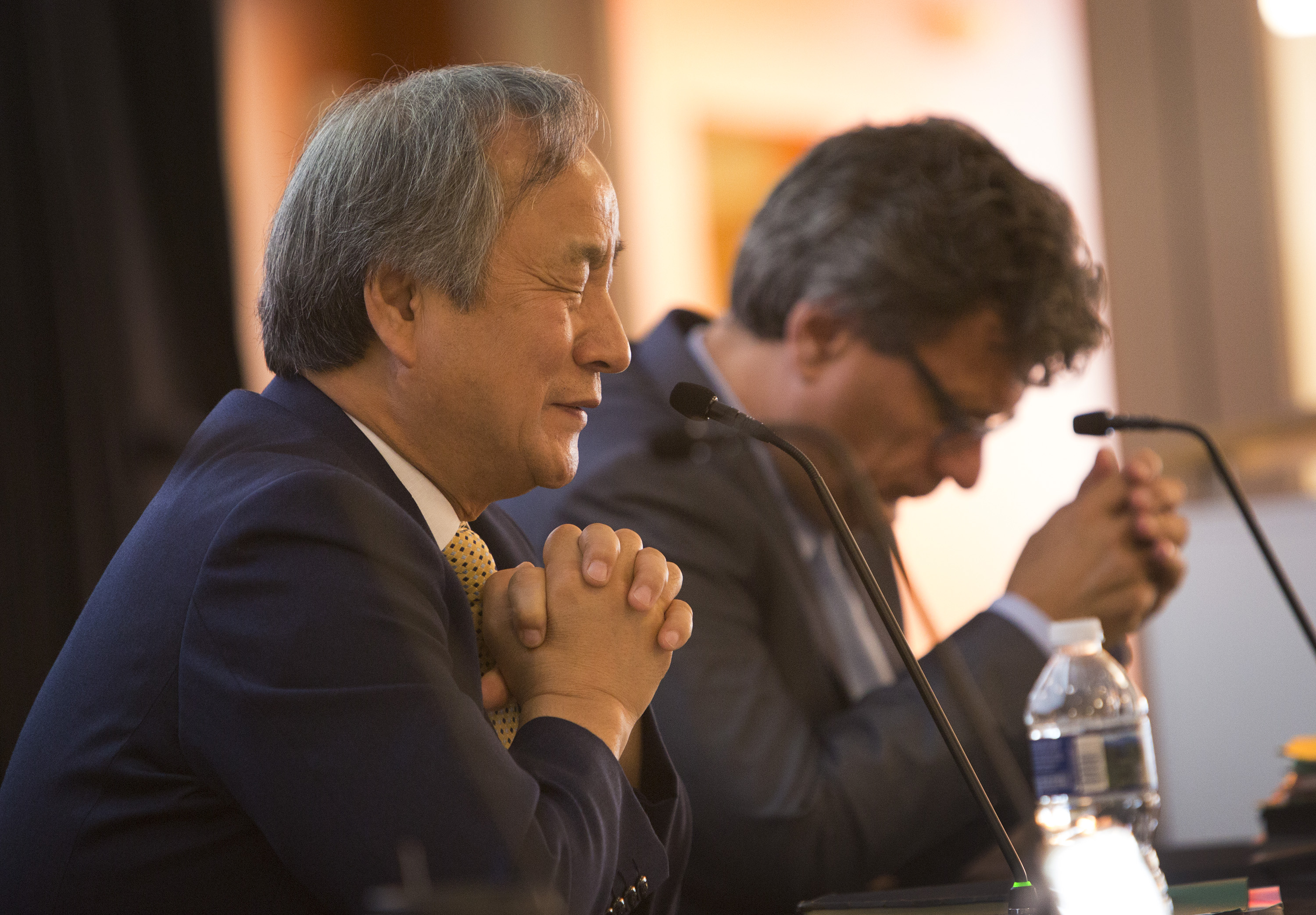 Bishop Hee-Soo Jung and Thomas Kemper pray during the morning session of the annual board meeting of the General Board of Global Ministries held at the new United Methodist Church Global Mission Center in Atlanta on Oct. 20. Photo by Kathleen Barry, United Methodist Communications

“We have worked, lived and slept transition for the last two years and now to be here and to be able to celebrate is just something very special,” Thomas Kemper, top executive for Global Ministries, told the invited crowd of area church leaders and members, partners and city representatives.

The dedication for the United Methodist Church Global Mission Center Building was livestreamed as part of the first meeting of the agency’s 2016-2020 board of directors. The celebration included greetings from representatives of the Atlanta area and church leaders and musical offerings from the young singers of the Atlanta Music Project AMPlify Zaban Choir.

Bishop Lawson Bryan, South Georgia Conference, noted that Methodism came early to Georgia when John and Charles Wesley landed near Savannah in 1736. “When John Wesley set his British foot on American soil in Georgia, he took the first step in what has become the global reach of The United Methodist Church,” he said.

Churches in South Georgia are grateful “for the way Global Ministries has resourced us for decades,” including recent calls from the United Methodist Committee on Relief during the threat by Hurricane Matthew.

“At the same time, we want to offer our own resources to Global Ministries,” the bishop added. “For instance, South Georgia is a leader in sustainable agriculture. Practices developed here can be invested into people throughout the world.”

Atlanta-based Bishop Sue Haupert-Johnson, North Georgia Conference, vowed “to pledge all the resources of the North Georgia Annual Conference in partnership with Global Ministries.” The conference presented the mission agency with a large decorative nameplate made by a woodworker from Cascade United Methodist Church in Atlanta.

Haupert-Johnson, who is part of the Global Ministries board of directors, said that part of her episcopal role is to build relationships between the conference and the mission agency, Emory University and other seminaries and institutions. “I’ve never been so excited to have such an assignment,” she added.

Other welcoming remarks came from local officials. Bettina Gardner, representing the city of Atlanta, talked about the many ways in which Global Ministries will “fit right in.” She noted that the mayor of Atlanta, Kasim Reed, a United Methodist himself, meets regularly with the city’s religious leaders.

Eloisa Klementich, president and CEO of Invest Atlanta, the city’s official economic development arm, declared that “Global Ministries will be a tremendous asset to Atlanta in many different ways.”

Wisconsin Area Bishop Hee-Soo Jung, the new president for Global Ministries, briefly described the road that led to Atlanta and beyond. He cited the opportunity to partner with centers of theological education and the proximity to major public health institutions as benefits of the new location.

“Global Ministries is reshaping itself as an agency that comprises global mission connections,” Jung said. “In doing so, it recognizes that ours is a multi-centered world in which Christianity’s center of gravity has shifted to the Global South and East.”

In addition to its presence in Atlanta, the mission agency has opened a regional office in Buenos Aires, Argentina, with a second office to follow in Seoul, South Korea, next March and a third planned for Africa.

In a video greeting during the dedication, U.S. Senator Johnny Isakson, also a United Methodist, said he attended Grace Church as a child. Global Ministries has spent the past year transforming what has now become the north and south buildings into spaces suitable both for the mission agency and the congregation.

Kemper lauded the efforts of longtime staff executive Roland Fernandes who led the renovation project and noted that the board has received more than $2 million in grants from local foundations to help cover the costs to move to Atlanta, including the Pitts and Woodruff foundations.

The event brought together nearly 200 members for the ordination of new leaders, lectures, worship and other celebrations.
Mission and Ministry