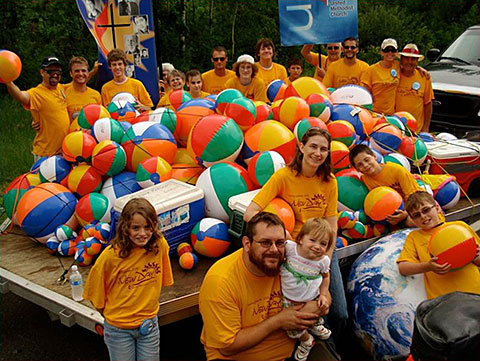 Minnesota United Methodists have raised $2,226,023 in pledges and gifts for Imagine No Malaria, The United Methodist Church's campaign to eliminate malaria deaths in sub-Saharan Africa by 2015.

That total, the highest amount raised by a United Methodist annual (regional) conference to date, is "a vivid demonstration of the vitality of our participating churches," said Minnesota Bishop Sally Dyck. "They have vision for the realm of God and compassion for people outside of their immediate community. Their creativity in raising awareness and giving generously is inspiring."

Malaria, a preventable disease spread by mosquitoes, no longer occurs in developed nations such as the United States. The church's Imagine No Malaria campaign has stated that deaths from malaria can be prevented even in sub-Saharan Africa, where it is estimated that a child dies every 45 seconds from the disease.

Imagine No Malaria, in partnership with the United Nations Foundation and working alongside organizations like the Bill and Melinda Gates Foundation, the World Health Organization and others, already has diminished the death toll through medical aid, preventive measures, education, and communication. United Methodists around the world are working to raise $75 million for the mission. The commitment from the Minnesota Conference now puts the amount raised at more than $19 million.

Minnesota United Methodists had raised $1.2 million in pledges by Nov. 30, 2011, and earned an additional $600,000 from an anonymous donor. The conference's total pledge goal was $1.8 million.

Minnesota-with 355 apportioned churches, not the largest conference in the United Methodist Church-is the only conference to exceed $1.5 million in pledges and gifts to Imagine No Malaria and the only one to reach its goal before the end of the pledge period (seven months early). Additional pledges are expected. 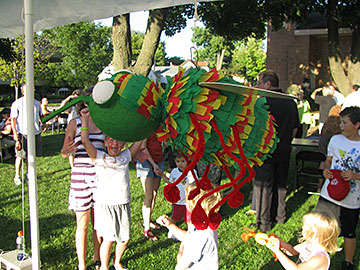 Faith United Methodist Church in St. Anthony, Minn., made
a piñata mosquito for an Imagine No Malaria fundraiser.
A web-only photograph by Susan Mullin.

"Young people have been particularly drawn to this ministry," Bishop Dyck said. "They are interested in church when church is saving lives."

What is now apparent is that "a sustained effort" can make a difference, said the Rev. Larry Hollon, top executive of United Methodist Communications, which handles the Imagine No Malaria campaign.

Because of better prevention and control measures, malaria mortality rates have fallen by more than 25 percent globally since 2000 and by 33 percent in Africa, according to the World Malaria Report 2011 issued in December by the World Health Organization. However, a projected shortfall in funding threatens those fragile gains, the organization said.

The people of The United Methodist Church are stepping up "at a critical time," Hollon said. "As major-country donors are not increasing their pledges and, in some cases, reducing their contributions to the global effort to end malaria, the people of the Minnesota Annual Conference are giving a strong and encouraging message that the church can make a substantial difference in the fight against malaria."

Through their donation to Imagine No Malaria, Minnesota United Methodists "are making a strong witness to the world that it's critical for people of faith to tackle the diseases of poverty by backing up our words of concern with meaningful action," Hollon added.

The Minnesota bishop "is our strongest advocate as a whole," said Leia Williams, the full-time Imagine No Malaria field coordinator assigned to Minnesota. "She's a strong advocate for people in Africa, who don't have a voice in the United States, and she advocates for revitalization in local congregations through participation in global missions.

Because of better prevention and control measures, malaria mortality rates have fallen by more than 25 percent globally since 2000 and by 33 percent in Africa, according to the World Malaria Report 2011 issued in December by the World Health Organization. However, a projected shortfall in funding threatens those fragile gains, the organization said.

"Bishop Dyck made sure churches got the resources and training they need. She set aside a significant amount of time for me to address annual conference session. She motivated the cabinet to engage local congregations. She personally solicited and obtained major gifts, including a matching gift to encourage congregational participation."

Williams also pointed to pastoral leadership. "In this bad economy, pastors still embrace that God is a God of abundance," she said.

Dyck said the secret of Minnesota's success are the following best practices:

Twenty-one percent of Minnesota United Methodist congregations set a pledge goal of saving at least 10 lives per average worship attendee, raising more than $1.1 million in pledges. The conference successfully exceeded its goal even with fewer than 30 percent of churches pledging at this level. Eighty-three other Minnesota United Methodist churches also set goals, collectively raising $300,000 in pledges.

The total number of churches participating is 201. Sixty-eight percent of churches sent representation to training, exceeding all other conference training-participation levels.

"This has been a great example of combining large-gift cultivation and congregational participation," Dyck said. "Participating churches are showing their neighbors that they are relevant and compassionate."

*Rebeck is the communicator for the Minnesota Annual Conference.