On the Northern Cheyenne Indian Reservation, JuDee Anderson quietly listened as Otto Braided Hair spoke on behalf of the descendants of the Sand Creek massacre.

Anderson is chair of the six-person Native American Ministry at the Sheridan United Methodist Church in Wyoming, about 100 miles from the reservation.

On Nov. 29, 1864, a village of Cheyenne and Arapaho Indians were surprised by a brutal nighttime attack. Two hundred Indians were murdered and mutilated by a group of volunteer U.S. cavalry led by a Methodist pastor, Col. John Chivington.

The massacre was a long time ago, said Braided Hair, but spirits still are not resting. He periodically visits the Sand Creek Massacre National Historic Site in Colorado, where the remains of the deceased are buried.

"When we visit the site, our people see Indians on horseback. They see women and children," he said. 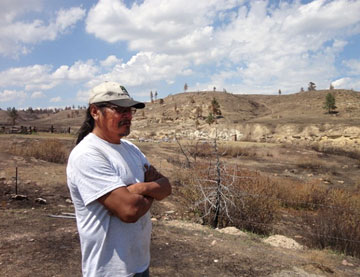 Anderson has known Braided Hair since 2004, when she first met members of the Northern Cheyenne Tribe.

A psychotherapist, Anderson was working at the Native American Addiction Treatment Center. As she learned more about the needs on the reservation, she became determined that her church should be involved in contacting Sand Creek massacre descendants who still live there.

She wanted to help heal the relationship between the tribe and the outside world. However, she said, she realized she had to take off her "white woman's" glasses to accomplish this.

"I arrived on the reservation for the first time with what I call my 'white tool bag.' I realized I needed to throw that away and start listening," she explained.

"As I learned to listen, I began to hear native people's perception and experiences of white people. This was very painful for me to hear. With the strength of my Creator and the loving acceptance of my Northern Cheyenne friends, I began to change."

For Braided Hair, along with other Northern Cheyenne in Montana, the journey to the site is part of a larger quest for healing that has lasted 148 years, a quest shared collectively by The United Methodist Church today and individually by many of its members.

Yet as passionately as Braided Hair pursues this quest, he said he believes this tragedy will continue to defy recovery. "We're still healing from it. Especially, we still mourn the chiefs we lost there: the knowledge, the wisdom."

In a culture in which tradition is handed down orally, the loss of a chief or tribal elder represents a death of history. "We're not only losing a person, but we're (also) losing culture. We're losing values."

He shook his head in frustration. "It's hard to explain." 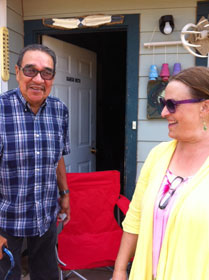 It is hard for The United Methodist Church to explain as well. One of the biggest donors to the historic site, the church issued a formal apology for Chivington's actions.

During an "Act of Repentance toward Healing Relationships with Indigenous Peoples" at the 2012 United Methodist General Conference, participants learned how hard the healing process has been and will continue to be.

If United Methodists are serious about repenting for past injustices against native peoples, they must prepare for a long and painful journey, the Rev. George "Tink" Tinker, a Native American theologian, told the assembly. "There is a lot of history that has been concealed; you have to go and dig it up."

Anderson is one of the people doing the digging. For years, she has adopted a steely resolve to listen without leading. At the same time, she sees and tries to address the growing human need on the reservation.

"It takes a long time to begin to understand the effects of colonization of Indian people and the continuing intergenerational trauma that is still passing from one generation to the next. It would be good for the church to be still and listen," she said.

Disasters - including last year's flooding and this year's wildfires - have compounded the vulnerability of the Northern Cheyenne people.

However, any help Anderson offers is held against the backdrop of hurt from the Sand Creek massacre.

"We try hard to heal," said Reginald Killsnight, another Sand Creek massacre descendant. "We use a lot of prayer."

Anderson prays with him. She still believes six people from a single congregation can make a difference. "We are just a tiny little ministry," she said, "and we don't have a lot of power. But we have kept our word."

The Sand Creek massacre descendents welcome Anderson at their meetings. However, anyone who thinks the massacre is a thing of the past is wrong, said Steven Brady, another Sand Creek descendant. "It's not over yet by any means."

Across the table, Anderson, still listening, simply nodded in agreement.