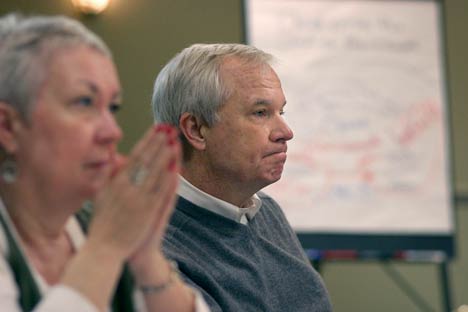 The Rev. Mary Ann Moman and Bishop William H. Willimon listen to discussions by the Study of Ministry Commission in Nashville, Tenn. A UMNS photo by Kathy L. Gilbert.

A report recommending "profound" changes to the ministerial leadership of The United Methodist Church was meant to spur conversations. It has done its job.

"We've got the church talking," said the Rev. Thomas E. Frank, principal writer of the Study of Ministry Commission report.

Frank reported on conversations and reactions to the eight recommended changes to the church's system of lay, licensed and ordained leadership during the commission meeting Feb. 22-24 in Nashville.

The report was posted in January on the United Methodist Board of Higher Education and Ministry's Web site along with an online survey, which drew approximately 1,000 responses by its Feb. 26 deadline.

At its February commission meeting, members reviewed another report based on 805 responses to the survey submitted between Jan. 9 and Feb. 12 and showing that the church is split over the proposed changes. "The data neither confirms nor inhibits us from going forward," Frank said.

Frank, who is professor of religious leadership and administration and director of Methodist Studies at Candler School of Theology, received additional feedback on the proposed changes by attending a meeting of the Order of Elders, Order of Deacons and Fellowship of Local Pastors on Feb. 12. 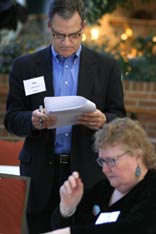 "There was a lot of hostility and fear and deeply felt criticism-mostly around the sacraments being taken away from small rural churches," he said. "I was asked, 'Is this a plan to close small churches or to stop paying local pastors?'" He added, however, that most people felt more positive about the report by the end of the meeting.

Frank proposed some "imagining alternatives" to the report that ranged from restoring elements of the pre-1996 orders of ministry to setting broad standards for ordination.

Commission members divided into four work areas to tackle some of the larger questions such as conference membership, voting rights and privileges of local pastors, itinerancy and continuous appointment, education, funding, licensing, and ordination as deacon and elder.

The four work areas will report on April 15, and the full commission will meet again in May. A final report will be presented at the 2008 General Conference, the denomination's lawmaking body that meets every four years.

Within the next month, Frank will revise the report to incorporate changes made by the commission during its February meeting, said Bishop William H. Willimon, episcopal leader for the Birmingham, Ala., area and chair of the study commission. That revised draft also will be posted on the board's Web site, and people again will be invited to comment.

"The results shows why we need a group like this," Willimon said. "A lot of results of the survey are coming from people speaking from 'my little corner' and it is important for us to look at the whole picture."

One significant issue discussed by the commission was the understanding of deacon as a prerequisite of ordination as an elder, said the Rev. Robert Kohler, assistant general secretary, Division of Ordained Ministry, Board of Higher Education and Ministry.

"We have raised questions about sacramental authority of local pastors and the means by which they can care for their congregations," said Kohler, adding that local pastors make up a third of the church's leadership.

"We need to be concerned about the needs of those congregations as well as the ordering of ministry within the annual conference."

Creation of the study commission was prompted by a "mountain of petitions" at the 2004 General Conference related to local pastors, voting privileges and sacramental authority, said the Rev. Mary Ann Moman, associate general secretary of the board's Division of Ordained Ministry.

"Local pastor issues created this commission, but you can't deal with that in isolation of itinerary, ordination, conference membership and all the other issues because they are all interrelated," Kohler said. "In order to answer the questions that came out of the last General Conference, we have to look at the whole. That is what we are attempting to do to see if there is a way to care for the church now and into the future." 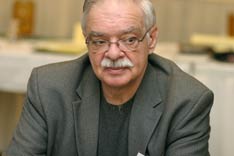 "We need to be concerned about the needs of congregations," says theRev. Robert Kohler of the Board of Higher Education and Ministry. A UMNS photo by Kathy L. Gilbert.

"The goal of the survey to achieve a diverse population of people across The United Methodist Church was fairly successful," said Michelle Fugate, director of research and data management for the board.

Of the 805 responses used in Fugate's report to the commission:

"The majority who responded identified themselves as elders (43 percent) or local pastors (31 percent) and only 5 percent were laity," she said.

Fugate said none of the proposed recommendations was viewed by the majority as serving to strengthen the United Methodist connection.

"The survey illustrates that these are important questions that the church is grappling with," she said. "No clear answer exists, but participants clearly indicated that these are issues with which they are passionate."

Frank agreed. "The report is the subject of a lot of conversations," he said. "We are addressing significant issues that people have a huge stake in, and we need to proceed with caution and conviction."

Board of Higher Education and Ministry