The skies were gray. The faithful had to wear masks and keep their distance.

But Lt. Cmdr. Genevieve Clark, a United Methodist chaplain in the U.S. Navy, was still able to lead an Easter sunrise service on the flight deck of the USNS Mercy, a hospital ship deployed to Los Angeles to help in the coronavirus pandemic.

“I tried to encourage these sailors that although there is chaos and even clouds literally covering the sunrise during the Easter crisis of 2020, we can still be and are still being the hands and feet of Jesus,” Clark said.

Earlier on April 12, and across the country, Maryland Army National Guard Chaplain (Capt.) Amor Woolsey led Easter morning services at two guard armories. Social distancing was required there too, but that didn’t get in the way.

“It was such wonderful worship,” said Woolsey, a United Methodist elder. “We celebrated the risen Christ together.”

Woolsey is a 10-year veteran of guard chaplaincy and knows the men and women she counsels aren’t fed by spiritual food alone.

“I brought little Easter treats for them,” she said.

Some 400 United Methodist clergy serve as U.S. military chaplains, but Clark and Woolsey appear to be the only ones on special deployments related to the coronavirus threat. 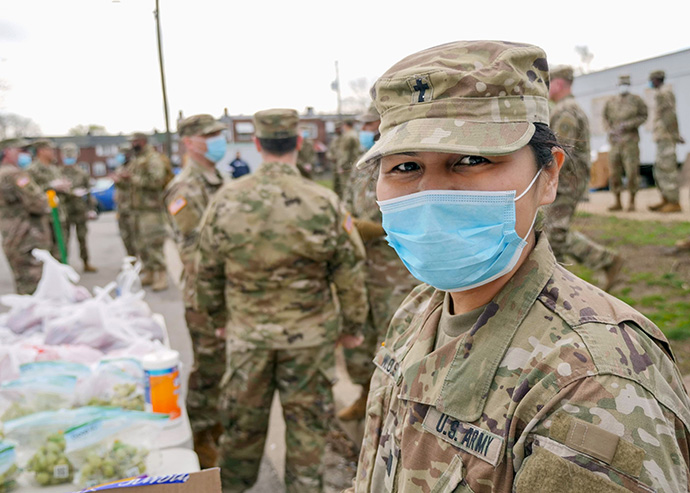 The Rev. Mitchell Lewis is unaware of others, and he leads the United Methodist Endorsing Agency, which qualifies clergy for service in a range of non-military and military settings.

Lewis himself served 26 years as an Army chaplain — but he never got deployed because of a pandemic.

“It’s a very unusual situation,” he said. “I’ve never come across anything quite like it.”

She first served local churches, but at the 2007 Pacific Northwest Annual Conference met a Navy chaplain and began to feel what she calls a “call within a call.” A year later, she was a Navy chaplain herself, beginning a career that has seen her deployed on ships and stationed at bases.

“I just really felt I wanted to serve God and country,” Clark said. “This has been absolutely wonderful. I love it every day.”

About three weeks ago, Clark was assigned to the Naval Medical Center in San Diego and looking forward to a summer deployment aboard the USS George H.W. Bush. Then the coronavirus pandemic gripped the U.S., and the USNS Mercy was tasked with taking on hospital patients to free up bed space for expected coronavirus victims.

Chaplains would be needed.

“I was offered the opportunity to come aboard the ship,” Clark said. “I had about 24 hours’ notice.”

For now, Clark lives on the USNS Mercy, temporarily separated from her husband.

“We care for everyone on board, regardless of religious affiliation or no religious affiliation,” she said of herself and fellow chaplains. “We do that by walking around, visiting with people, hearing their stories. If there’s something we can help them with that’s specifically spiritual, we try to talk to them in their spiritual language.”

As one of three Protestant chaplains aboard the 1,000-bed ship, Clark helped conduct a range of Holy Week services, in a variety of worship styles.

“I’ve called United Methodists the utility infielders of the chaplaincy,” he said. “We can do everything from gospel services to high liturgical services. We’re comfortable across the board.” 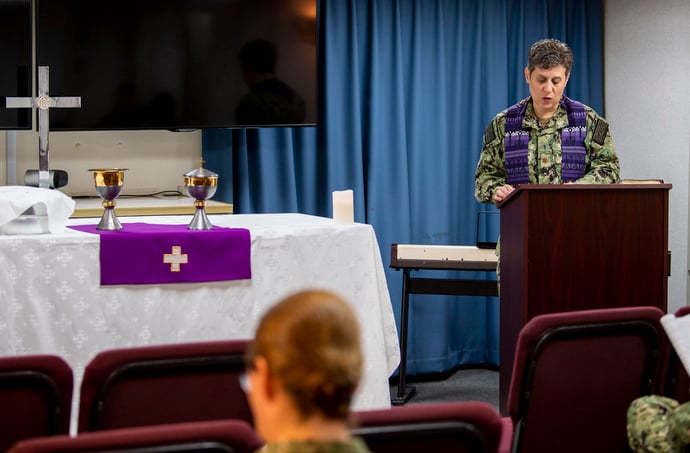 For Clark, the flexibility has stretched to include social distancing.

“We have been able to worship as a group, even if we’re six feet away from one another,” she said.

So far, the USNS Mercy has taken in small numbers of hospital patients, and some have been discharged. California Gov. Gavin Newsom has said some healthy nursing home patients may be brought onto the ship.

Meanwhile, several members of Mercy’s crew have tested positive for coronavirus, leading them to be isolated off-ship.

Clark said that in an anxious time, she and crew members have shared about good things happening, such as less smog in Los Angeles as traffic has abated due to the general quarantine.

She counseled one sailor whose wife had a baby in his absence.

“Missing the birth of his child was difficult, but he was very thankful the baby came and was healthy,” Clark said.

Woolsey, a 37-year-old Wesley Theological Seminary graduate and granddaughter of a Methodist missionary, embraces her life in parish ministry. But she also has felt called to part-time military chaplaincy, feeling she can help ease the burden of those traumatized by wartime service and separation from loved ones.

Gov. Larry Hogan activated the Maryland National Guard March 12 to provide general support as so many businesses and nonprofits closed because of coronavirus. Woolsey was called up, temporarily leaving her husband and 13-year-old son for residence in a barracks.

She’s been with the guard as it has set up coronavirus testing sites and substituted for nonprofits in delivering food to the needy.

“The most powerful ministry within the guard is the ministry of presence, being there when they’re doing their thing, even if it’s just filling sandbags,” Woolsey said. “They appreciate their chaplain being with them.”

That’s especially true when she has something sweet or salty to hand out.

“I have snacks beyond snacks, and that boosts morale,” Woolsey said.

This Holy Week found her recording messages for her churches’ online worship, while also leading services for guard members.

On Easter, she was glad to be wearing fatigues and a stole, bringing what she called a “faith over fear” message to some of those deployed with her.

“I reminded them that as Christ brings hope to us, we bring light and hope to those we interact with — especially during this time.”

The board of The United Methodist Church’s finance agency has approved a monthly stipend for active bishops who serve more than one episcopal area in this time of disruption.
Faith Sharing

The rewards of online ministry are too rich to give up if and when the coronavirus is a thing of the past, said a pastor in Louisiana. Three stories from First United Methodist Church of Baton Rouge illustrate his point.
Church Leadership

The daily life of United Methodist pastors is getting more and more stressful, with COVID-19, racial unrest, natural disasters and a likely denominational split over sexuality taking a toll.