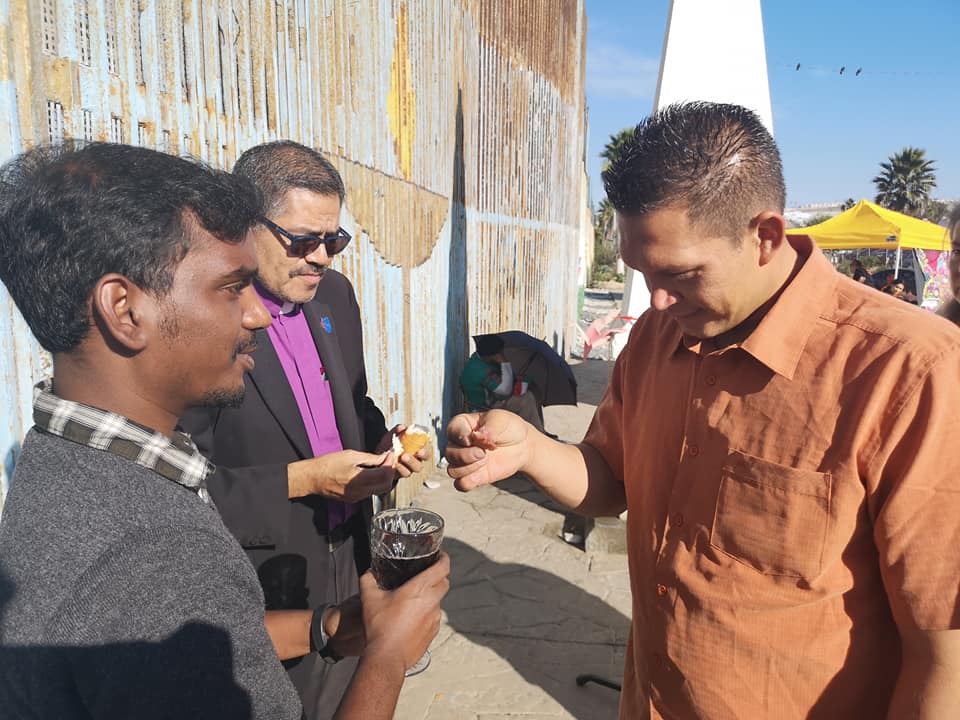 In recent weeks, more than 6,000 migrants have arrived in the city of Tijuana seeking asylum in the United States and members of the Methodist Church of Mexico are providing food and shelter with help from nearly $135,000 in grants provided by the United Methodist Committee on Relief.

A grant for $98,243 will be used to open a fully equipped kitchen that will serve three meals a day to 200 people in Tijuana. Annually, the kitchen will feed 219,000 meals, said Jack Amick, director of Sustainable Development with UMCOR.

A $36,550 grant will provide two meals, hats and first-aid supplies for 1,000 people in Apaxco, Mexico. The church also will install toilets and shower equipment donated by another partner, Amick said. This area is located along the train route used by many migrants and the Methodist Church of Mexico has long offered meals and a place to sleep and shower. But the recent influx of migrants has overwhelmed the Apaxco ministry, so the church asked for UMCOR’s help.

In early November, the United Methodist Council of Bishops, the College of Bishops of the Methodist Church of Mexico, United Methodist Mission in Honduras and Iglesia Methodista de El Salvador released a statement in English and Spanish calling for all congregations to be “agents of God’s mercy toward the migrant.”

“Funds for these grants come from the generous donations of churches and individuals to the Global Migration Advance #3022144,” Amick said. “These grants work with partners to alleviate suffering for migrants of all types all around the world as partner organizations seek to uphold the four rights of migrants: the right to stay, the right to safe passage, the right to welcome, and the right to return.”

The process of waiting for asylum could mean spending more than two months in Tijuana before crossing the border, said Bishop Felipe Ruiz-Aguilar, episcopal leader of the Northwest of Mexico Conference, which includes Tijuana.

"There is a great need to provide shelter for mothers and their children, so we are initiating conversations with the United Methodist Women to consolidate this project and open this shelter to serve about 20 women with their children,” he said.

The bishop said a shelter the church once ran for migrants in Ciudad Juárez is being reopened. “It had been closed (because of) some administrative difficulties. This shelter is very good, has the capacity to receive 60 people," Ruiz-Aguilar said.

The church is supporting shelters already established by the Salvation Army and the nonprofit shelter Youth 2000.

"We help them with food, clothing, blankets, toiletries, etc. When we open our dining room we will continue to coordinate the work with them," he said.

Ruiz-Aguliar said with insufficient shelters and food, many people are sleeping and living in the streets of the city — a situation that has created tensions between migrants and some people in the local communities. Some residents have demonstrated against the migrants.

He said when migrants arrive in Tijuana, they register on a list kept at the border. Then, migrants on the list are called and allowed to cross into the United States.

Once in the U.S., they are held in a detention center for inquiries and interviews about their asylum request. Later, the migrants leave the center with an electronic ankle bracelet that they wear while the asylum request is processed, Ruiz-Aguilar explained.

In other regions, such as Mexicali, two congregations bring food every weekend for migrants. One church goes to a place that is called "The Train Station," which is the final stop of "The Beast" — the popular name of a cargo rail that connects the southern and northern borders of Mexico.

The rail is frequently used by migrants — mainly Salvadorans, Hondurans and Guatemalans — who are traveling to the United States. Many making the trip have died or been maimed when trying to climb on the train or by falling off the roof.

Another Methodist congregation of Mexicali distributes hot meals from its building and provides food to migrants in the City Central. Other congregations, such as at Agua Prieta and Nogales on the border, also distribute food periodically.

The bishop said the Methodist church in Monterrey, which has long worked with migrants, has stepped up its efforts since the migrant caravan. Because of that, a group of migrants from the caravan has gone to the Monterrey area in order to take advantage of support from established communities.

Ruiz-Aguilar said that in the city of Apaxco, where the “Beast” arrives, the church has a shelter. “This place offers them food and a space to take a shower and rest in their journey,” he said.

The churches in the capital region of the country have focused their efforts on supporting the immigrant shelters that were set up in the area of Apaxco in the state of Mexico.

The Methodist Church of Mexico is preparing to intensify and expand its work with migrants, the bishop said. He said that in February, the church will have a five-day workshop on the subject of immigration in Mexico City and at the Apaxco shelter.

“This course will be attended by the presidents of migratory and social action issues of our conferences, as well as bishops and superintendents. The goal is to provide more training to address this issue and multiply this among the pastors of all the conferences,” he said.