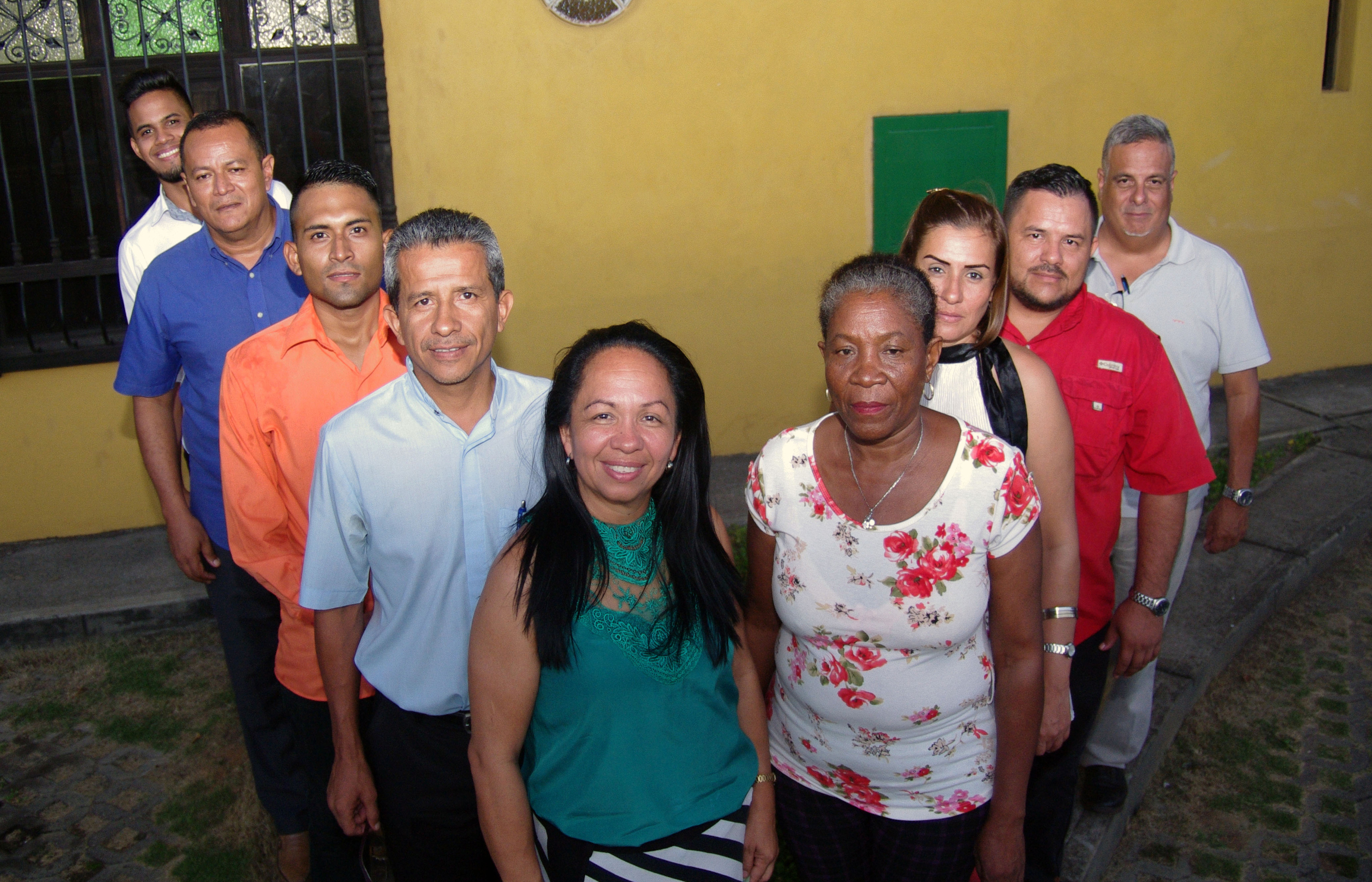 As part of a cultural tradition, delegates from the Council of Evangelical Methodist Churches of Venezuela, left, and the Christian Methodist Community of Venezuela, right, aligned themselves in a "V" shape to symbolize "Venezuela in victory" at the end of their dialogue. Photo by Gustavo Vasquez, UMNS.

Although Methodism in the South American country goes back more than a century, no church there has a national presence.

Venezuela has a population of 31.8 million. Caracas, the capital city, has more than 5 million people. Social problems and growing economic difficulties have caused the emigration of more than 3 million people, according to the United Nations High Commissioner for Refugees.

In this context, Methodist groups throughout the country support ministries to serve their communities in health, nutrition and education, while developing new congregations.

From Global Ministries, the Rev. Edgar Avitia, regional liaison for Latin America and the Caribbean, and the Rev. Juan Gattinoni, program executive for the region, represented The United Methodist Church.

In the 1990s, Avitia said, Global Ministries and CIEMAL agreed on a cooperative effort in five countries where no established Methodist work existed: Colombia, El Salvador, Honduras, Nicaragua and Venezuela.

“The fact that this dialogue has taken place is …very positive,” he said. “Even better [is] the atmosphere of fellowship and the willingness … to walk together.”

The Council of Evangelical Methodist Churches of Venezuela is in conversation with CIEMAL to receive official recognition and connect with other Methodist churches in the region.

Bishop Adonías Pereira do Lago, CIEMAL president and episcopal leader of the Fifth Region of the Methodist Church of Brazil, and the Rev. Juan de Dios Peña represented the regional council.

“This is the third meeting in which CIEMAL participated in Venezuela,” said Pereira do Lago. He said the first two with conversations with Methodist groups, but this meeting sought concrete action toward unity of the Methodist church. 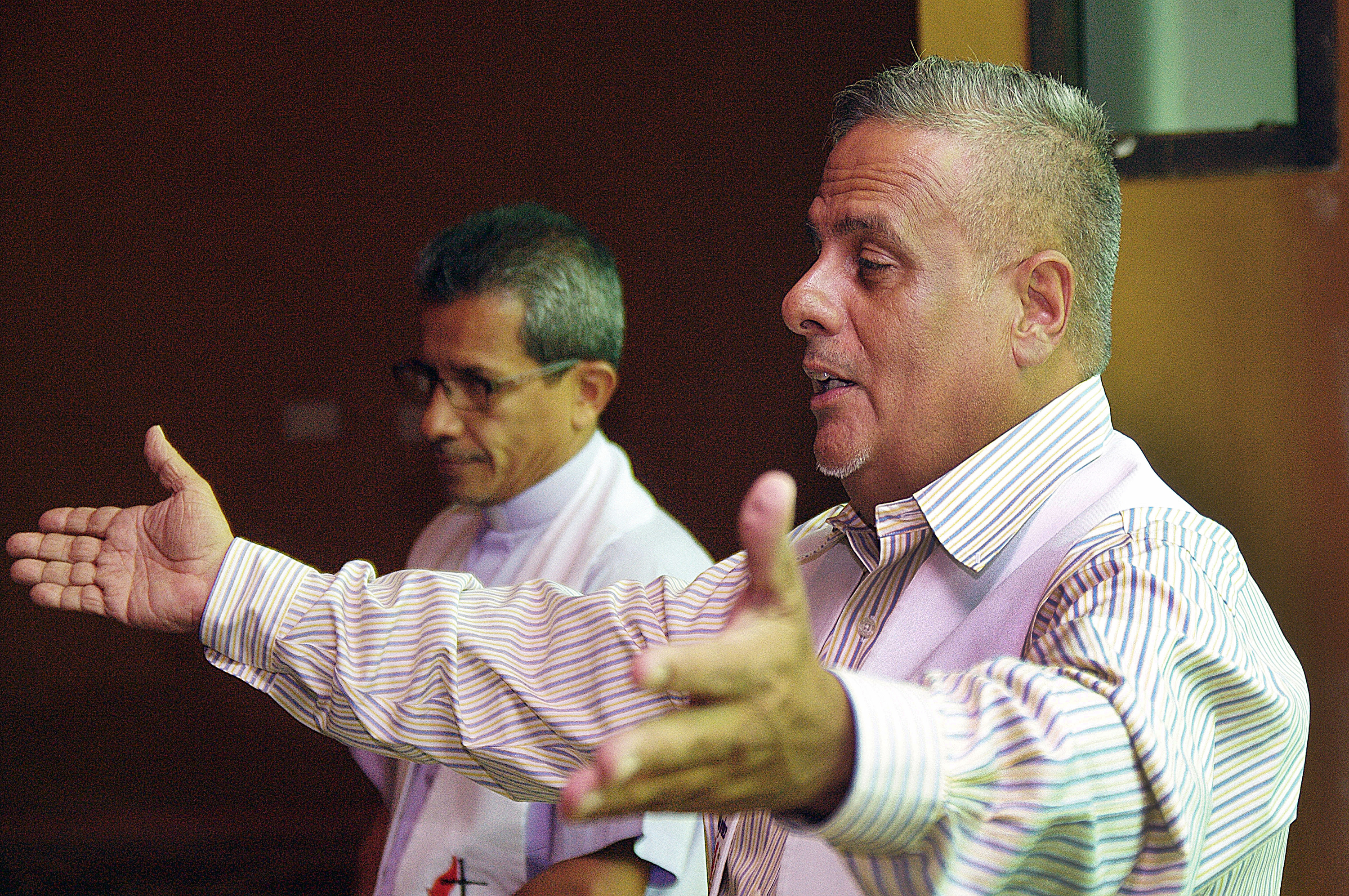 Pastor Fernando Mendez, Christian Methodist Community of Venezuela, right, and Bishop Toby Ramirez, Council of Evangelical Methodist Churches of Venezuela, presided together during the sacrament of communion, which served as a symbol of the spirit of unity that reigned during a dialogue about establishing a national Methodist church presence in Venezuela. Photo by Gustavo Vasquez, UMNS.

“As CIEMAL, we walk with both communities and pray that, in the future, they can unite in one church,” Lago said.

For the Venezuela roundtable, Global Ministries contributed programmatic, human and financial resources. CIEMAL worked with the local groups in the coordination and the agenda to strengthen the initiative.

Barbara Oppliger, main facilitator of the dialogue, is a lay leader of The United Methodist Church in Switzerland and president of her local church. She was part of a facilitators' training program that Global Ministries promotes regularly among Methodist leaders in various regions of the world.

“I perceive good will to continue on this path of unity,” Oppliger said. “I think the task load could be an obstacle that delays some things in the process, as well as the current context of the country, where solving everyday things takes up a lot of time and energy. International support in financial resources and advice will be important.”

The Rev. Nicanor Lopes, pastor and professor of theology of the Methodist Church of Brazil, was the auxiliary facilitator. Like Oppliger, Lopes has been part of the Global Ministries’ training program.

“The goal of this roundtable,” Lopes explained, “was to facilitate the mechanisms for the groups to build a common goal, according to the disposition that each had toward unity. We have perceived a lot of motivation and willingness to work together and to seek spaces of unity.

“One of the fundamental bases of this and other dialogues is the development of the mission from the Wesleyan theological perspective. This provides important tools for the growth and expansion of the church, with a well-defined Methodist identity.”

Participants agreed on a series of actions with target dates and specific responsibilities. They agreed to:

They also decided that the Methodist Christian Community of Venezuela, as a body recognized by CIEMAL, would send a letter to the regional body recommending the official recognition of the Council of Evangelical Methodist Churches in Venezuela.

The Christian Methodist Community of Venezuela began in 1987 as a nondenominational Christian movement. In 1991, the group moved to define itself as Methodist, based on the study of the Wesleyan precepts and a meeting with Bishop Paulo Lockmann, leader of CIEMAL and the Methodist Church of Brazil.

Fernando Méndez, pastor and leader of the body’s delegation to the dialogue table, recalled, “One of the things that connected us with the Methodist tradition was the creed and the Social Principles of the church. After sharing and analyzing … we discovered that we were Methodists without knowing it.”

The Council of Evangelical Methodist Churches of Venezuela was formed in 2012 with several pastors from Methodist traditions who served in different parts of the country. After a process of discernment, joint work and development of new congregations, the pastors decided to form a council with the intention of establishing a Methodist church at the national level.

Currently, the council has six churches established in the cities of Puerto Ordaz, Maracay, Valencia and Barinas and plans to develop a church in Caracas through a ministerial cooperation agreement with other ecumenical groups.