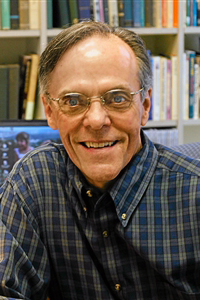 Photo of the Rev. Jim Harnish, courtesy of the Florida Conference.

The United Methodist Church has a “vibrant” center that can keep the denomination strong despite the damaging debates around division, said a newly formed group of the “Methodist middle.”

“To Serve the Present Age” was a gathering of 47 United Methodists from the five regional jurisdictions of the church in the U.S. who met in Nashville, Tennessee, May 4-5. The group is planning a larger gathering this fall in Atlanta to build a broader network of support. The crowd in Nashville was ethnically diverse, and included clergy and laity.

“Around those core commitments, we are willing to allow space for equally committed disciples to come to different understandings about many things, including same-sex relationships,” the Rev. Jim Harnish told United Methodist News Service. He is a retired pastor, writer and teacher. “I believe that there is a vibrant, warm-hearted spirit at the heart of many if not most of our congregations that is deeply committed to the core affirmations of our Wesleyan spiritual and theological tradition, our denominational mission and our way of living in connection with one another."

Members attended the initial gathering at their own expense, Harnish said. The intent was to listen.

During the gathering, several participants said they felt the majority of United Methodists are the “Methodist middle” who share a commitment to making disciples of Jesus Christ for the transformation of the world even as they hold different convictions about matters such as same-gender marriage and ordination of LGBTQ people.

“Folks in the middle often do not want to contribute to conflict. They are, by nature, more moderate,” Harnish said. “It’s also harder for them to find a voice because folks on the polar ends of the conversation often attract the most attention — they make more interesting news coverage.” 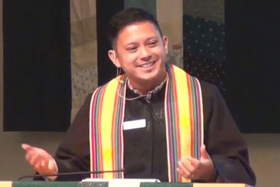 The Rev. DJ del Rosario, pastor of Bothell (Washington) United Methodist Church, said he has been praying about this issues and feels “called to be a part of a group that holds the sacred center.”

“I dream of a church that is known more for who and what we stand for rather than the things we are against in our world," del Rosario said. "I envision our work to focus on people who identify as center left and center right and frankly haven’t heard a voice that resembles where they are or the people in their communities."

The Rev. Tom Berlin, senior pastor at Floris United Methodist Church in Virginia, said it is time for all who love the church to speak up.

“It is imperative that the broad center find its voice and clearly state what they feel God is calling the church to do,” Berlin said in a press release issued by the group. Berlin is a member of the Commission on a Way Forward, which was named after the 2016 General Conference to help the bishops guide the church in addressing issues of human sexuality and church unity. Berlin suggested that United Methodists pray for the commission, offer their own insights for its work and share hope.

The press release listed other initiating members, including the Neil Alexander and the Revs. Carl Frazier, Ginger Gaines-Cirelli, Adam Hamilton, Dan Johnson, Candace Lewis and David McAllister-Wilson. For more information about the group or the fall meeting, email [email protected].

Gilbert is a multimedia report for United Methodist News Service. Contact her at 615-742-5470 or [email protected]. To read more United Methodist news, subscribe to the free Daily or Weekly Digests.