Note: This is the last of a six-part series on Meharry Medical College and the work it is doing to end health-care disparities.

Meharry Medical College is a 135-year-old institution focused on the future.

Some of the deadliest diseases - including HIV/AIDS and many kinds of cancer - strike racial and ethnic minorities at higher rates compared to the general U.S. population. Because of Meharry's reputation for research and service to those most affected by health-care disparities, the school receives significant grants to continue its work.

The largest grant - $18 million in 2009 - established the Robert Wood Johnson Foundation Center for Health Policy. Other grants are providing the funds to tackle issues such as high infant mortality, breast and prostate cancer, and medical and mental health care for the homeless.

Dr. Rahn Bailey, director of the department of psychology and behavioral science, is two years into a five-year, $1.5 million grant from the federal Substance Abuse and Mental Health Services Administration to help the homeless population receive medical care in the Nashville, Tenn., area.

Six vans leave the Meharry campus each day to treat homeless patients referred to the college by shelters, churches and community organizations.

Homeless people typically do not receive medical care because of overriding psychiatric problems such as depression, bipolar disorders or chemical dependency that may have led to them becoming homeless in the first place, Bailey said. 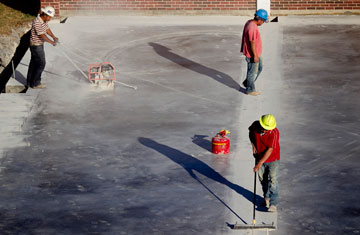 Workers prepare a foundation for the New Alumni Hall building at Meharry Medical College in Nashville, Tenn. The 5,600-square-foot building is one of the construction projects underway at the United Methodist-related institution.

Another area of critical concern to health-care professionals is the high infant mortality rate among racial and ethnic minorities.

A new model of prenatal care offered at Meharry is helping low-income African-American and Hispanic women to receive care sooner and to deliver healthier babies.

In the Centering Healthcare Institute, six to eight women at the same stage of pregnancy meet in regular small-group sessions for up to two hours instead of the traditional doctor office visit. A physician gives each woman an individual assessment and checks on her progress, but in addition to seeing the doctor, the women spend time with other health professionals as well as each other.They discuss issues important to them such as diet, exercise, changes in their bodies and any fears or concerns they might have.

The Breast Health Project is addressing the high rate of African-American women with breast cancer by giving low-income women or women without health insurance free mammograms.

Prevention is often the key to good health, and good oral health is often neglected, said Dr. Janet Southerland, dean of the school of dentistry.

During Mondays in February, Children's Dental Health Month, children ages 1 to 17 can get free cleanings, screenings and sealants from dental students in the School of Dentistry.

Researchers at Meharry are looking at numerous other health-related problems from childhood obesity to walking and bike safety for beginning-level adult English language learners.

Read other stories in the series

In addition to the work going on in labs and classrooms, construction projects also are expanding and improving the Meharry campus. Some of the most recent improvements include:

Although the 1980s were a difficult time for the historically black university, the school has undergone a renaissance, Riley said.

"Meharry feels differently about itself, and those of us who work here and teach here and learn here are more confident now.

"I often say, in 130 years, there have only been 10 presidents of Meharry, which is amazing. It is the honor of a lifetime to be president of this national treasure."