For more than 32 years, the Rev. Dr. William Bobby McClain gave his heart and soul to the students at Wesley Theological Seminary in Washington, D.C.

There, McClain taught preaching and worship to more than a generation of students, multiplying his theological and oratorial acumen around the world. He died in 2020 at age 82.

One of 13 United Methodist seminaries in the United States, Wesley is now the final resting place for McClain following a solemn service of the interment of his ashes Nov. 2. 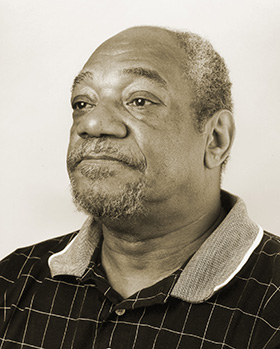 Wesley’s students, faculty and staff gathered in their chapel and online to say one final goodbye to McClain as his widow, Jo Ann McClain, spread her husband’s ashes around a newly planted dogwood tree on campus. Bobby McClain had requested his ashes be interred at Wesley, and he had specifically requested a dogwood tree.

“As the ashes fell on the wet ground, to nourish the new tree,” said the Rev. David McAllister-Wilson, president of Wesley, “I am reminded of how Bobby McClain will always be a part of this living community.”

The service was a celebration of the school's tradition of powerful preaching, past and present, according to Special Assistant to the President, the Rev. Chip Aldridge. He arrived at Wesley as a student in 1986 and has spent decades working for the school. A native of North Carolina, Aldridge connected with his fellow Southerner, McClain, often sharing a private joke about how “those Yankees preach too fast.”

Aldridge said it was a big task to put into words the importance of McClain, a civil rights activist as a young man, to the Wesley community and The United Methodist Church at large.

“It is hard to characterize Dr. McClain with simple titles,” he said. “He was one of those professors, like many faculty at Wesley, who touch so many people’s lives. He was a professor, a mentor, and he seemed to have one of those instincts of when to reach out to a student to put them in touch with the right person. He was a great connector of people.”

McClain was instrumental in the United Methodist worship book “Songs of Zion,” which was published by the United Methodist Publishing House and Abingdon Press in 1980. According to his obituary, it sold more than 2 million copies and brought the sacred music and worship traditions of the African American culture to the pews of predominantly white denominations. He also authored several other books focusing on Black church worship.

“The legacy he left there,” Aldridge said, “shaping and sharing spirituals and gospels that otherwise may not have made it into our worship resources … is due to his work to see that they were all in one place.”

A video recording of the service, the reading of names for All Souls and the Scattering of Ashes service is available for viewing at this link.

Wesley's Associate Professor of Preaching, the Rev. Veronice Miles, Ph.D., preached for the service, continuing the seminary’s Exodus series on "Leading in Liminal Times." Her sermon highlighted the Hebrew midwives Shiphrah and Puah.

“They were supposed to be agents of mass destruction,” Miles said, because Pharoah wanted them to kill all the newborn boys. “But they didn’t do that. They came to fear God more than Pharoah… and said ‘no’ to him and ‘yes’ to God.”

Miles also paid tribute to McClain, the predecessor in her faculty role, “whom I knew as a teacher, preacher, scholar and wisdom-giver, whose legacy will forever occupy a space of honor at Wesley Theological Seminary.”

“Jo Ann, thank you for sharing Bobby with us,” she said to his widow. Jo Ann McClain served for more than 12 years as the executive administrator of the Council of Bishops.

Dr. Eileen Guenther, who is Professor Emeritus of Church Music at Wesley, spoke during the service.

“I cannot possibly do Dr. McClain justice in only a few words,” she said. “He was a passionate author, teacher, preacher, and activist, and that just scratches the surface.”

Guenther said that one of the spirituals that McClain “particularly resonated with” is “Go Down Moses.” This “code song,” she said, was a favorite of the enslaved individuals who created it, especially the last verse, “as it was known to be one that couldn’t be sung in the present of ‘the masters.’”

The Wesley Chapel Choir then led the congregation in singing that last verse, as all processed across campus to the final resting place of McClain:

“O let us all from bondage flee,

And let us all in Christ be free,

Whether in school or the workplace, the Rev. Margret Powell experienced hostility and ridicule as a person of color, but she persevered.
Faith Stories

A new hymn written for Army veterans, “Ever Faithful to the Call," exists because its author survived a close call during the Vietnam War.