You've got to feel bad for Mary Magdalene.

Sure, she has fame many of today's celebrities would envy. She's played a leading role in works ranging from Renaissance paintings to just about every Passion play and movie made about Christ's life. But all that stardom has come with a price.

Few other followers of Jesus have been saddled with such a notorious reputation. She's the reformed harlot who is the polar opposite of the Virgin Mary. Or, thanks to the best-selling thriller "The Da Vinci Code," she's seen as Jesus' secret love interest. If she were a celebrity today, she would get salacious headlines on TMZ and an unflattering photo on the cover of US Weekly.

Lost in all the speculation about her love life is the biblical record. The New Testament never identifies her as a prostitute, former or otherwise, and certainly not as Jesus' would-be girlfriend.

The Bible shows Mary Magdalene as an important disciple of Jesus — the one witness to the Crucifixion and Resurrection identified in all four canonical Gospels. In three Gospels, she encounters the risen Christ. In the Gospel of John, she is the first person to testify to the good news that Christ has conquered death.

This Easter Sunday, United Methodists and other Christians around the world will revisit that account in John 20:1-18. The passage features Mary Magdalene's tearful conversation with a man she first mistakes for a gardener but ultimately recognizes as the risen Savior.

The Rev. Sanford "Sandy" Brown, pastor of Edmonds United Methodist Church in Edmonds, Washington, is among the clergy who has preached on these verses from the lectionary. He has a doctorate in gender and spirituality.

Brown said it's significant that the four Gospels agree that women remained with Jesus during the Crucifixion and that women — particularly Mary Magdalene — discovered the empty tomb. Given women's often debased place in first-century society, Brown said, these accounts tell Christians something important about Jesus' ministry.

The women "went to the tomb in love and service to Jesus' remains and memory," he said. "The one who serves is the one who receives the greatest joy. The humble is the one who is exalted."

Magdalene in the Bible

The New Testament offers few clues as to Mary Magdalene's background before she followed Jesus. Many scholars speculate that her last name refers to Magdala, a fishing village in Galilee where she might have grown up. 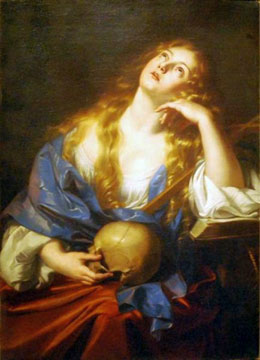 The Gospels of Luke and Mark identify her as a woman Jesus healed of seven demons, though neither specifies the nature of these unclean spirits. What the first-century world labeled demons could refer to sinfulness or what we would consider physical and mental infirmities today.

Luke first introduces Mary Magdalene with a group of women who support Jesus' ministry "out of their resources." But in the previous chapter, Luke tells the story of an unnamed penitent woman with an alabaster jar who anoints Christ's feet with perfumed oil and wets them with her tears. That seems to be the start of the confusion.

The Bible does not say what happened to Mary Magdalene after Jesus' Ascension. She is not named in Paul's letters or in the Acts of the Apostles, the sequel to the Gospel of Luke.

Ann Graham Brock, affiliate professor of New Testament at United Methodist-related Iliff School of Theology in Denver, argues in her book "Mary Magdalene, The First Apostle: The Struggle for Authority" that the greater the emphasis on Peter's role in a text, the more diminished Mary Magdalene's role tended to be. That's especially evident in Luke and Acts, where Peter is featured prominently.

However, more than a century after Jesus' time, Mary Magdalene remained a popular role model of discipleship in extra-canonical texts such as the Gospel of Philip and Gospel of Mary.

By the third century, Brock writes, some early Christians had given Mary Magdalene the honorific "apostle to the apostles."

Still, as the church grew and became more established, women leaders were sidelined and that included the women named among Jesus' earliest followers.

Magdalene and the pope

"I always say it was the church hierarchy that drove Mary Magdalene to prostitution," said Mark A. Chancey, professor of religious studies at United Methodist-related Southern Methodist University in Dallas and co-author of "Alexander to Constantine: Archaeology of the Land of the Bible."

"Driving her to prostitution fits in the context of putting women in their place."

Credit Pope Gregory the Great with fusing Mary Magdalene; Mary of Bethany, the sister of Martha and Lazarus, and Luke's sinful woman in the popular imagination.

In a sermon delivered in A.D. 591, the pope gave the Roman Catholic Church's official sanction to the view that Mary Magdalene was the promiscuous woman with the alabaster jar whom Jesus redeemed.

Mary of Bethany ended up in the mix because in John's Gospel, she anoints Christ's feet before the Passion.

The sermon transformed Mary Magdalene into the bad girl of the Gospels, and his interpretation prevailed in Western Christianity for nearly 1,400 years.

That was especially apparent in religious art. Throughout the Middle Ages, miracle plays and pictures frequently showed Magdalene as weeping for her sins. Because of these tearful depictions, the English contraction of Magdalene's name — "maudlin" —  soon took on the connotation of effusive sentimentality.

Meanwhile, other legends developed about Mary Magdalene's life after the Ascension. One common story is that she sailed away with Martha and Lazarus and spent the rest of her life in a cave repenting of her decadent life. As the years passed, the story went, her clothes dwindled into rags and she had nothing to cover her but her long, curly hair.

This image of the later penitent and mostly naked Magdalene proved a popular one with artists such as Renaissance painter Titian.

Joan Baldridge, an art historian in Little Rock, Ark., said this image of Mary Magdalene gave artists an excuse to paint a sexy "pinup." She became sort of the Marilyn Monroe of the 16th century.

In 1969, the Roman Catholic Church officially separated Luke's sinful woman, Mary of Bethany and Mary Magdalene into three distinct women during a revision of its missal — the book containing the services of Mass throughout the year.

But the change has been slow filtering into the pews and into popular culture. As recently as Mel Gibson's "The Passion of the Christ" in 2004, Magdalene was still shown as an ex-prostitute.

Baldridge, an Episcopalian, did her master's thesis at New York University on Mary Magdalene and the depictions of her in art. In recent years, she has given lectures on Magdalene around the country to churches, art groups and a university religion class.

"I believe that Mary Magdalene is being done a tremendous disservice by the unrelenting myth of her as a reformed prostitute," Baldridge said. "Even the idea that she had a romantic relationship with Jesus undermines her and implies that is the only reason she was close to Jesus."

Instead, Baldridge sees Magdalene as a spiritual inspiration.

"She is more prominent in these signal events that we mark at Eastertide than the Virgin Mary or the 12 disciples," she said. "The sheer volume of her presence in these accounts is significant. To me, an accurate portrayal of her would be as one of those closest to Christ —  one who, perhaps, understood his teachings better than anyone else around him."

Like Baldridge, a number of United Methodist scholars and clergy are trying to rehabilitate Mary Magdalene's reputation.

"One of the reasons Mary is so fascinating is that there are so many ways we can find ourselves in her story," he said.

Her example teaches Christians today, Harnish said, that "extravagant faithfulness grows out of an extravagant awareness of the extravagant love and grace of God in Christ."

Attendees to the Charisma Revival conference pledged to aim for a ministry centered on cooperation and connectionalism, even amid such a divisive time for The United Methodist Church.
Mission and Ministry