Most United Methodists who traveled to the 2016 General Conference got here by plane.

His hope for the journey: To meet people and share Jesus.

He departed his Crossville home as the sun set May 4 and arrived in Portland as dawn was breaking May 8. It marked the first time the 65-year-old had taken a bus for interstate travel.

Neal talked to people running from bad relationships and others running to a fresh start. He saw a marriage proposal and acceptance. He met military veterans, ex-cons, people traveling to and from rehab, a priest and a girl from Somalia.

Whenever he could, Neal listened as people shared their pain, and he tried to lighten their load.

“God has taken care of these people somewhere, somehow before I ever entered their lives. He really doesn’t need me, but he’ll use me if I’m willing,” said Neal, a member of Fair Glade United Methodist Church near Crossville. “I just want to be willing.” 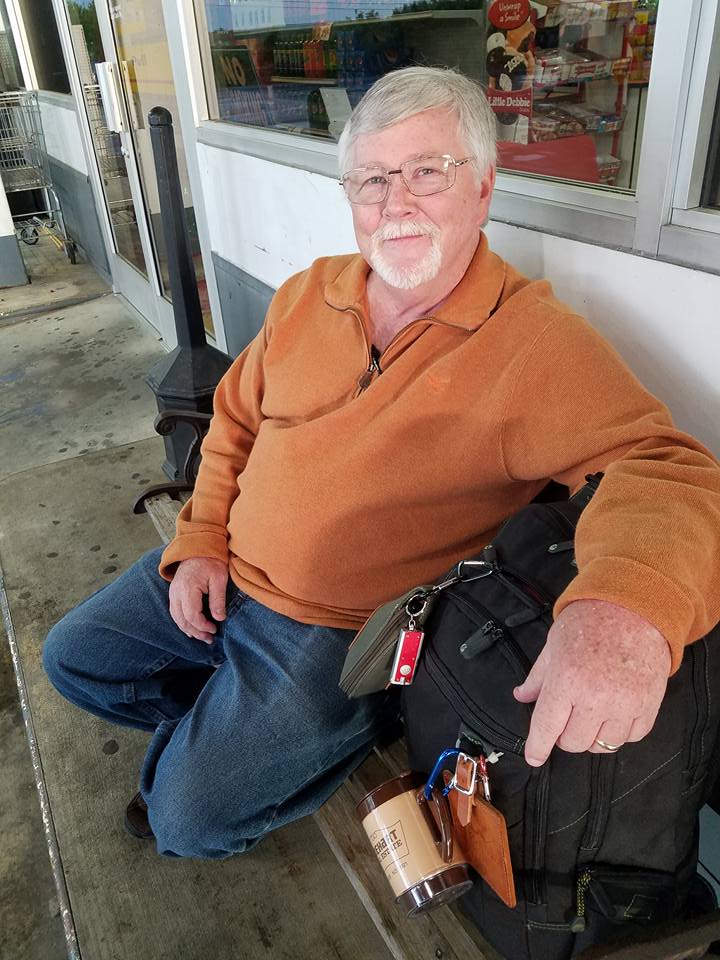 Randy Neal sits May 4 packed and ready for his long bus trip. Photo by Holly Neal.

Neal got the idea for taking the circuitous trip after last summer’s Tennessee Annual Conference when McAllily told those gathered about the late Harry Denman, a renowned sharer of the gospel.

Denman, the first top executive of the Methodist Church’s Board of Evangelism (now part of Discipleship Ministries), counted both the Revs. Billy Graham and Martin Luther King Jr. among his fans. The lay evangelist traveled the United States mostly by bus and frequently asked those he met to “pray for me.”

Neal, who years ago had received a Harry Denman Evangelism Award from his conference, wanted to follow the lay evangelist’s example in his travel plans. He saw an opportunity since the Tennessee Annual Conference elected his wife, Holly, for the third time to be a General Conference delegate.

Neal, who is retired, has accompanied her each time to the 10-day-meeting. He volunteers with local church homeless ministries and soup kitchens while his wife participates in the denomination’s top legislative assembly.

Most United Methodist leaders point out building relationships with people is critical to bringing Christ into their lives.

Neal agrees, but he stresses that relationships don’t have a set time limit.

“A relationship can be three minutes or it can be the rest of your life,” he said. “We shouldn’t limit ourselves. We shouldn’t say, ‘I don’t have time to invest in a relationship, so let’s not do this.’ Don’t ever pass up an opportunity.”

By far Neal’s most meaningful experience came at one stop when a fellow passenger named Cleo asked Neal to buy his lunch.

At a nearby fast-food restaurant, Neal bought Cleo the burger he requested and a cup for water. Cleo headed for the drink dispenser and then left the restaurant. Neal finished his meal inside.

As Neal headed back to the bus, he passed Cleo talking with friends and noticed that instead of water, the man had soda in his cup — soda not paid for.

Neal suddenly felt in his spirit that he should pray with Cleo. “I thought, ‘Sure, I can pray for Cleo,’” Neal recalled. “But I felt again the nudge to go pray with Cleo.”

So, he approached Cleo and asked if he could pray. Cleo agreed. It was not the usual prayer that many would offer with a stranger.

“I thanked God for providing the money and the love of his people so that I could buy us both lunch,” Neal said. “And then I asked God to forgive Cleo for getting soda in the cup we both knew was meant for water.”

A few hundred miles down the road, Cleo approached Neal again. He told Neal lots of people had told him over the years that they would pray for him. But until that day, no one had ever prayed with him in his presence. Neal estimated Cleo to be about 50 years old.

Hahn is a multimedia news reporter for United Methodist News Service. Contact her at [email protected].