To follow Christ, get off the sidelines and onto the field.

United Methodist Men heard variations of this message throughout the group’s 12th National Gathering, which took as its theme “Discipleship: The Contact Sport.” The July 7-8 event drew more than 600 men from across the United States to St. Luke’s United Methodist Church in Indianapolis.

“God has given each and every one of us the potential to be more than what we are,” preached Mississippi Area Bishop James Swanson Sr., president of United Methodist Men during opening worship. “You and I are not what God wants us to be. Even if we are in Christ Jesus, God expects us to become more.”

Discipleship requires more than being a benchwarmer, or a pew warmer, for that matter, Swanson and other speakers attested. Throughout the day-and-a-half meeting, the men put that call into action. They tackled mission work, huddled in prayer and occasionally shared some tears.

There may be no crying in baseball, but there certainly is in discipleship. As men reminded each other, even Jesus himself wept. 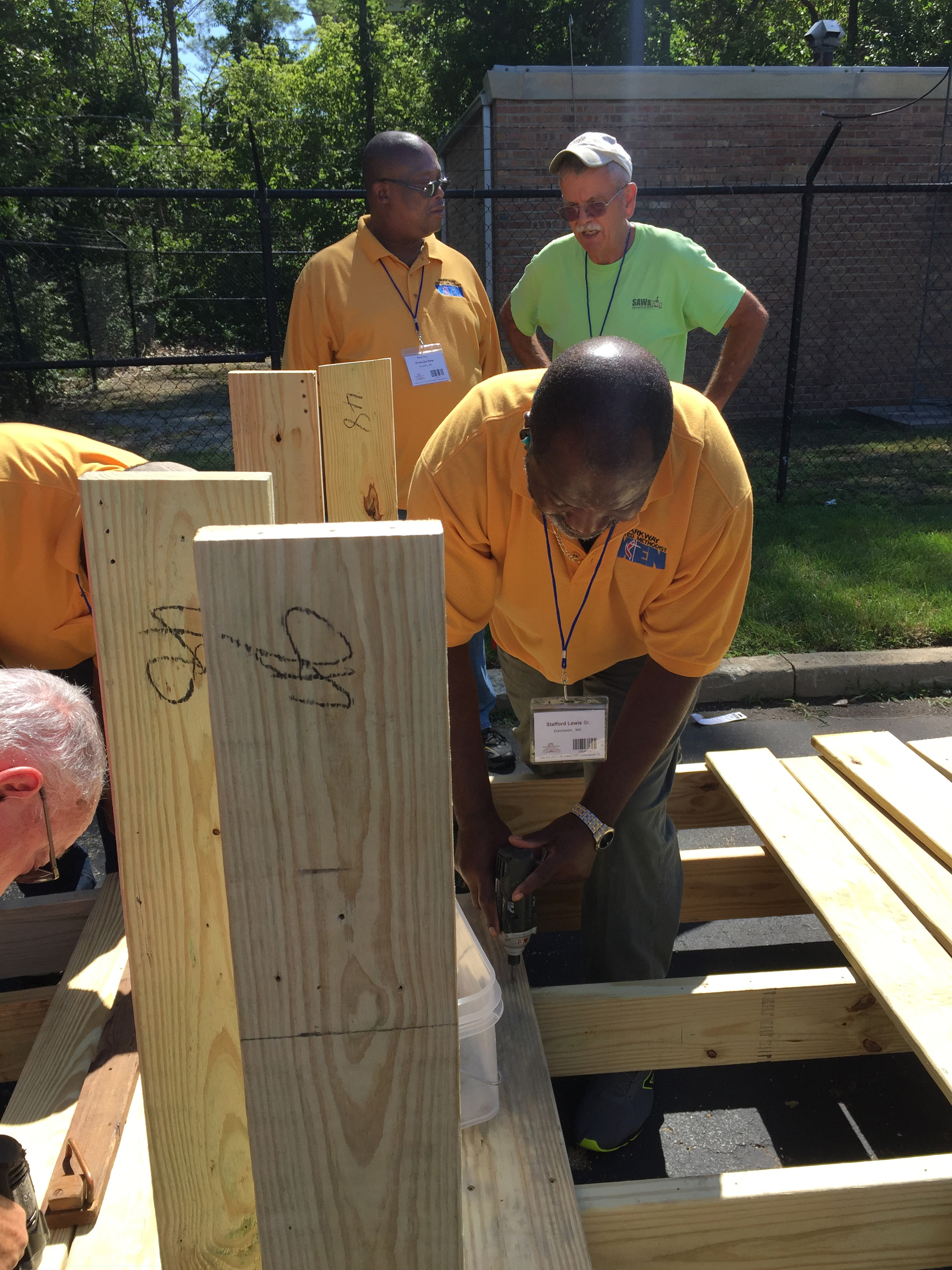 During the gathering, a number of participants took turns staffing the Upper Room Prayer Line, a toll-free prayer line provided in large part by United Methodist Men groups. That was just part of the men’s outreach.

Dozens joined the Society of St. Andrew  in unloading and assembling 10-pound bags of potatoes that they later distributed to Indianapolis food banks. Lynette Johnson, the society’s executive director, said that the day’s “potato drop” would provide 21,000 pounds of food to the community’s hungry.

Across the church parking lot, the buzz of drills filled the air as other men built wheelchair ramps for Servants at Work, an Indianapolis ministry supported by St. Luke’s.

Still other men learned how to assemble and disassemble Personal Energy Transportation carts, hand-cranked vehicles that serve as power wheelchairs in regions off the electrical grid. Mobility Worldwide, co-founded by the Rev. Mel West, a United Methodist pastor, works with churches and other nonprofits to distribute PET carts in the developing world.

For Paul Williams of Willow United Methodist Church in Willow, Alaska, the weekend offered the opportunity “to gather with like-minded individuals” — people who share his conviction that Christianity requires more than weekly worship attendance.

Williams, like many United Methodist men, is deeply involved with Kairos Prison Ministry — although for him, it means a five-hour drive each way to the state minimum-security prison. He was also eager to learn how to get involved in other ministries, especially United Methodist Men’s longtime efforts to combat domestic violence.

Speaker Shan Foster offered the message that discipleship requires addressing such violence. Foster, a former NBA player, leads  AMEND Together, an initiative of the YWCA in Nashville, Tennessee, that trains teens and young men to respect women and safely intervene in a culture where sexual harassment, rape and domestic violence are all too common.

“I’m not here because you are part of the problem,” he told those assembled. “I’m here to invite you to be part of the solution.”

The good news, he added, is that “The United Methodist Church is leading the way.”

The Rev. Kevin M. Watson challenged the men to use the small groups pioneered by John Wesley to help nurture discipleship and hold each other accountable. Watson is a Wesleyan and Methodist Studies professor at Emory University’s Candler School of Theology in Atlanta. He is also the author of "The Class Meeting: Recovering a Forgotten (and Essential) Small Group Experience," a frequently used text by United Methodist Men. 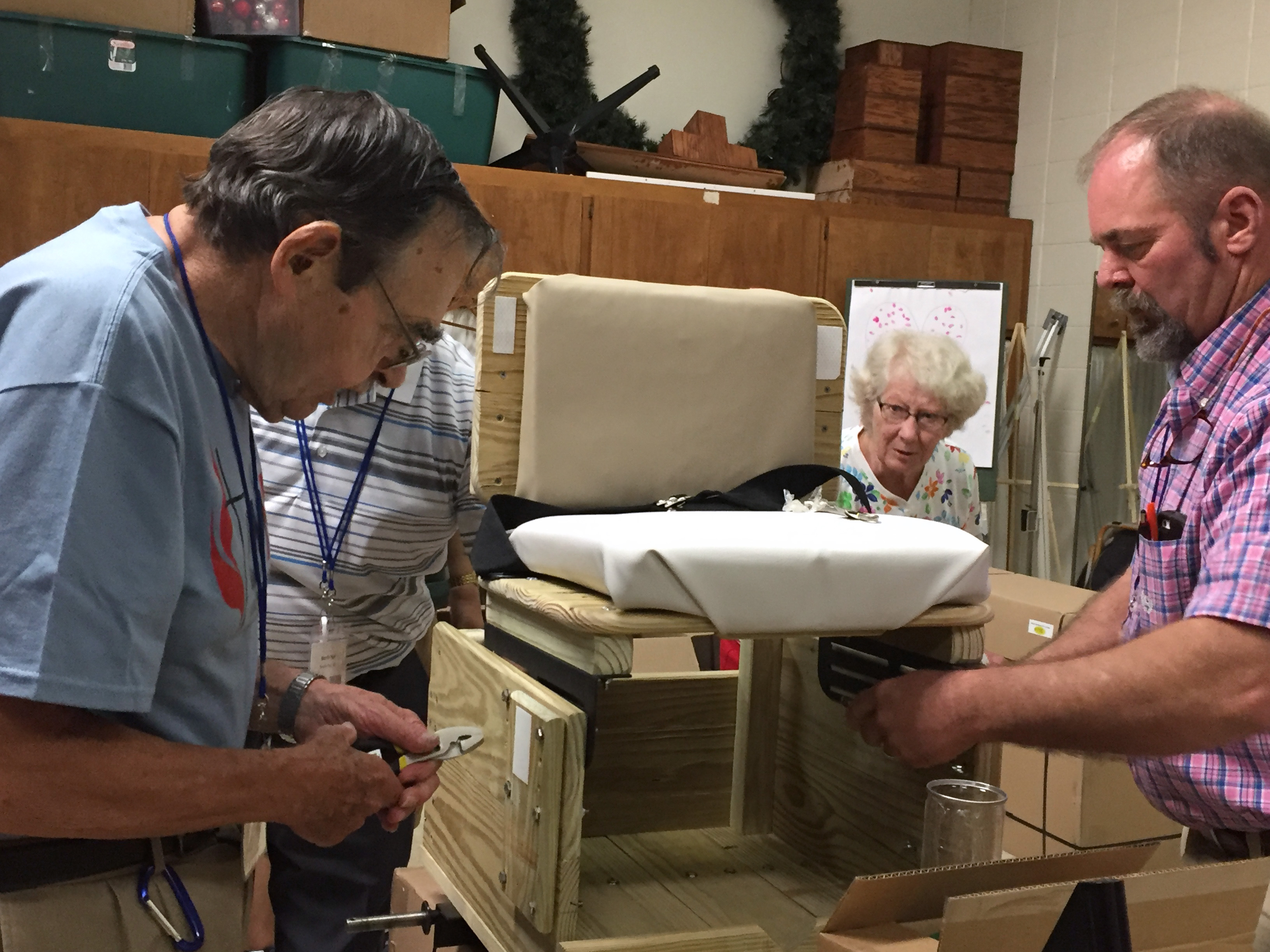 United Methodist Men join with the nonprofit Mobility Worldwide to assemble hand-cranked carts with a seat and basket. Called Personal Energy Transportation or PET carts for short, they provide mobility for people who are unable to walk and live in areas off the electrical grid. Photo by Heather Hahn, UMNS.

He pointed out that in Wesley’s day, the very definition of a Methodist was someone who attended a class meeting on a weekly basis. It’s the kind of faith-formation model United Methodist men can use to reach out to their spiritual brothers, he said.

“We are made for connection,” Watson said. “We need each other in order to grow in our faith and experience the kind of life God wants for us.”

He acknowledged that many United Methodist Men’s groups are struggling. Many units have an average age on the upper end of 70 and wonder how long they will last.

Holston offered a word of hope from his experience with the South Carolina Conference Men in Ministry, which he likened to Jesus using five loaves of bread and two fish to feed the multitude.

The first year Holston attended the group’s annual retreat in 2013, he said, the men’s gathering had 150 in attendance — and half of them were women.

Like Jesus’ first disciples, the bishop said, the men only saw five loaves and two fish.

Nevertheless, they prayed for God’s guidance, and they invited their neighbors. The next year, 576 came to the gathering.

Holston said he continues to hear God challenge the men to grow their ministry, and indeed growth continues. At the most recent South Carolina men’s gathering, more than 1,200 people attended.

What happened, the bishop said, is that the men realized they weren’t just getting together to have Saturday breakfast or a monthly barbecue. They started praying for God to use them to change the hearts of men.

“My friends, if you want a strong men’s group, then be a witness,” Holston preached. “When you become a witness, God will put you in touch with people that you never thought you knew. Believe in God’s grace.”

Tom Locke is retiring after nearly 30 years of leading the Texas Methodist Foundation, which under him has grown hugely in assets and become a catalyst for innovative church leadership.
Bishops

In her final address as Council of Bishops president, Bishop Cynthia Fierro Harvey urged as much unity as possible even as a new denomination plans to launch. The bishops also heard about the history of previous denominational separations.
General Agencies

The new top executive at United Methodist Men is seeking to expand the agency by getting many more local churches involved. Greg Arnold’s plans include defining a new relationship with Scouting and adaptation of an already-popular app called Live Bold, which he developed privately.