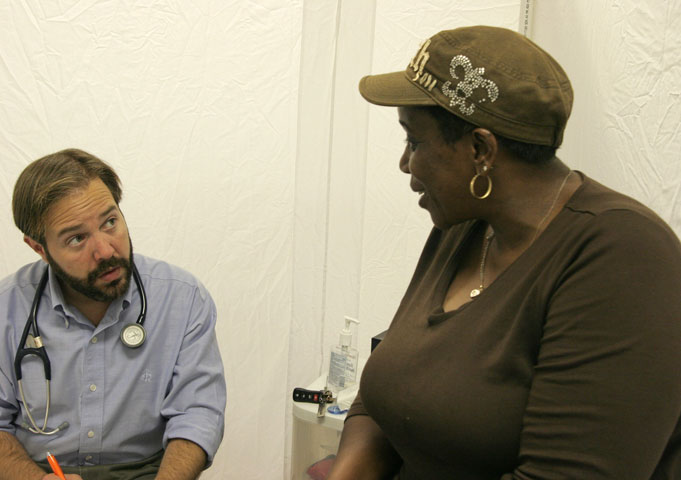 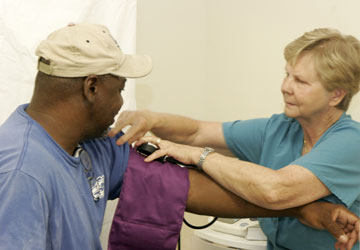 Lester Bridges has his blood pressure checked by Ruby Glenn, a retired nurse who volunteers at Luke's House.

Sharon Young, 52, sits in the metal folding chair and haolds up her arm for Ruby Glenn to strap on the blood-pressure cuff.

Glenn, in teal scrubs, gets busy taking vitals on Young in her small examining room bordered on two sides by white sheets hung on pipes. If she looks up, she has a good view of the altar at Mount Zion United Methodist Church.

Young knows she has been under a lot of stress, but she is shocked to see the high blood pressure numbers. Glenn, a retired nurse, isn't surprised at all.

Five years after the storm, Hurricane Katrina is still wrecking havoc on people like Young who struggle to rebuild their homes and lives. Most in this low-income neighborhood are living without any medical benefits, and their health suffers, said Glenn. 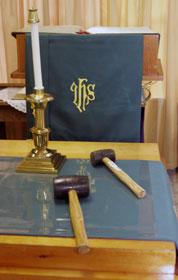 In addition to prescriptions and medical advice, the clinic is well stocked with spiritual backup.

Treating physical ailments is critical, but equally important is meeting spiritual needs, said Erica Washington, an epidemiologist with the Louisiana Office of Public Health who serves as the clinic director. A member of Mount Zion United Methodist Church, she has worked with Luke's House since November 2007.

"If you go into the clinic on any night, you'll see Pastor Callie speaking with patients or Pastor William speaking with our voucher recipients just to hear their story. Sometimes people might not necessarily want to seek psychiatric treatment; but sometimes people just want an ear."

Beth Morgan, a Navy librarian, and her husband Jim, members of Aldersgate United Methodist Church in Slidell, La., drive to the inner-city church from their home in Picayune, Miss., with boxes of books.

"I did some study on my own and found out that the homeless community generally has a hard time using their free time. They spend a lot of time just sitting and waiting &ellipsis; just trying to pass the day until the shelter opens at night. So we thought books would be a good way to help them pass the time," Beth said. 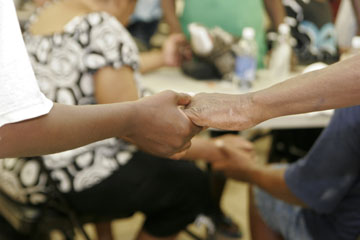 Many of the people who come for medical help are still homeless five years after Hurricane Katrina.

"Mount Zion is a blessing to the whole community," said Laverne "Queenie" Lassai, a resident of the neighborhood where the clinic is located.

"I'm not gonna lie to you about it. This &ellipsis; used to be a real rough neighborhood. Across the street was one of the roughest housing developments. But since Katrina, they've remodeled it. This is a multicultural, mixed neighborhood now," said Lassai.

The hurricane that hit the city in 2005 knocked out seven of 11 hospitals, including the large public hospital, and most are still closed in 2010. The others are "limping along," said Dr. Susan Berry, medical director for Luke's House. Berry, a member of Rayne, is a pediatrician for Louisiana State University Medical Hospital.

One of the missions of Luke's House is to connect patients with other resources in the community. Because they operate on donations and volunteers, they can usually only see about 15 patients.

Lester Bridges, 50, a client at the clinic, came recently because he hasn't had any medical care since he lost his job as a city park employee. He has a plastic bag full of empty prescription bottles, all of them expired in 2007.

Dr. Brent Wallas takes time with each person, listening to everything they have to say.

He gives both Young and Bridges prescriptions they can fill for $4 at a pharmacy that has an arrangement with Luke's House and a voucher to go to another clinic equipped to treat long-term illnesses. 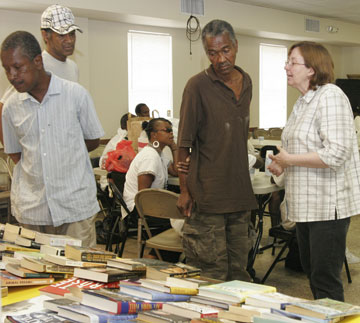 Beth Morgan brings a selection of books to Luke's House to share with the homeless community.

"I think the big thing to me is that a lot of us that had no contact with our poor neighbors couldn't just stay separate anymore," Thiele said. "Everybody was going through the same things. Everybody was kind of leveled by Katrina. &ellipsis; we were all trying to find somebody to fix our broken houses."

In a way, that is the gift Katrina gave to New Orleans, he said.

"There's a whole lot of us that in the past would have just avoided homeless people," he said. "Like for me personally I was a pastor at a church that when a homeless person would show up, even right after Katrina, we had no shelters available. I had no idea how to help people. So I would really rather avoid these people."

Thiele, who was a pastoral counselor and therapist for 25 years, said he is using his skills to just listen to people, to let them tell their stories. Kay Renar, a member of Mount Zion since 1974, has been volunteering since the clinic opened.

Her place of worship, Mount Zion, still has a gutted sanctuary. Katrina sent seven feet of water into the historic church. Members worship in the same room that gets converted into a clinic during the week.

"It gives me a feeling of helping someone who is less fortunate than I am. But for the grace of God, it could have been me 'cause we rode Katrina out. We just were fortunate enough to live in Algiers. So we didn't get much damage," Renar said.

"The people who come here are genuinely appreciative of what we do. We've lost a lot of family members since the flood. They've relocated. Some died in their homes. So it makes you feel good to know that you're doing something good for the community."

Young said before Katrina she was doing pretty well. Most of her family was evacuated to Texas after the storm, but she couldn't stay long in that state.

"I tried to live in Texas, but I felt so lonely. I love New Orleans, I love my city."