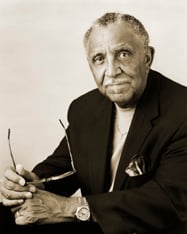 The Rev. Joseph Lowery, 87, gave the benediction for the presidential inauguration of Barack Obama. A UMNS photo by Mike DuBose.

Two United Methodist veterans of the civil rights movement were invited to share the inaugural platform on Jan. 20 when Barack Obama was sworn in as the 44th president of the United States.

The Rev. Joseph Lowery, 87, gave the benediction after President Obama's inaugural address. Dorothy Height, 96, was also invited to be among the special guests. Both had worked alongside the Rev. Martin Luther King Jr., whose birthday was celebrated a day earlier.

Lowery told National Public Radio on Jan. 19 that he was a bit unnerved by the thought that millions would be listening to his closing prayer. "Every time I think about what I'm going to say, I get a little stage fright," he admitted to Michele Norris. But he added that he had been praying for strength from God.

No stage fright was evident after the new president's address, as Lowery began his prayer by reciting the third verse of the hymn, "Lift Every Voice and Sing," which is No. 519 in the United Methodist Hymnal. "We truly give thanks for the glorious experience that we shared this day," Lowery prayed.

Noting that God will work "through faithful leadership" to restore the nation's stability, mend wounds and tend to the poor, Lowery called upon Americans to "come into the spirit of unity and solidarity to commit our support of our president."

Lowery put on his preaching hat as he concluded the prayer, asking that "all those who do justice and love mercy, say Amen." The "amens" were repeated several times.

In a Jan. 19 essay written for the Chicago Tribune, Lowery said that, during the oath of office, he would look down the National Mall and in his mind's eye "see a 34-year-old preacher standing before a crowd of nearly a quarter of a million at that Lincoln Memorial in 1963, calling on Americans to move beyond the color of their skin to the content of their character."

"Obama's inauguration is a nation's response to that call," he wrote.

Never expected to see the day

Height, who was invited by Obama to be his guest at the ceremony, told The New York Times that she never expected to live long enough to see an African American elected as president of the United States. 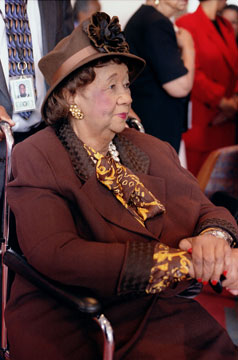 Dorothy Height is honored during a presentation at the United Nations in 1999. A UMNS file photo by John C. Goodwin.

"This is real recognition that civil rights was not just what Dr. King dreamed," she said. "But it took a lot of people a lot of work to make this happen, and they feel part of it."

A longtime member of St. Mark's UnitedMethodistChurch in New York before moving to Washington, Height has received numerous accolades for her civil rights work. In 2004, she was awarded the Congressional Medal of Honor by President George W. Bush.

Height was a national executive staff member with YWCA for 33 years and was elected national president of the National Council of Negro Women in 1957, where she led a crusade for justice for black women. She envisioned the plans for the National Centers for African American Women and the Dorothy I. Height Leadership Institute, which were launched in 1996.

Lowery co-founded the Southern Christian Leadership Conference with King in 1957 and served as its president and chief executive officer for 20 years, beginning in 1977.

King named him chairman of the delegation to take demands of the Selma-to-Montgomery March in 1965 to Alabama Gov. George Wallace. Wallace had ordered the marchers beaten-an episode that became known as "Bloody Sunday"-but apologized to Lowery in 1995 as the civil rights pioneer led the 30th anniversary re-enactment of the historic march that led to the passage of the Voting Rights Act.

As a United Methodist minister, Lowery was elected a delegate to three General Conferences and presided over an annual conference as acting bishop in 1966. His prophetic voice was instrumental in moving the church toward the goal of inclusiveness. He served as pastor of United Methodist churches in Mobile and Birmingham, Ala., and Atlanta, where he led CentralChurch for 18 years.

Dorothy Height, as president of the National Council of Negro Women, appeared on "Night Call", a Methodist radio program, in September 1965: "The Negro wants what everyone else wants... civil rights act of 1964..."

Dorothy Height, as president of the National Council of Negro Women, appeared on "Night Call", a Methodist radio program, in September 1965: "....when you speak of an American, you're talking about a white citizen...."