United Methodist congregations in the Southeastern U.S. are beginning a massive rebuilding job after being damaged by Hurricane Michael, buoyed by their work ethic and the support of neighboring conferences.

“All the help is an emotional lift as well as the labor people need,” said Bishop R. Lawson Bryan of the South Georgia Episcopal Area. “It’s telling them that ‘You are not alone.’”

Damage from the Oct. 11 hurricane was worst in the panhandle of Florida, Georgia and Alabama. Many areas were not quite ready for volunteers to arrive, though they hope the help will still be available after conditions improve a bit. Getting power and water back are the biggest priorities right now.

In the aftermath of Hurricane Michael, Catherine Earl heard a CNN interviewer ask a woman who lost her house in Mexico Beach, Florida, what survivors needed the most.

The woman’s answer — understanding, hugs and prayers — impressed Earl, who leads U.S. disaster response for the United Methodist Committee on Relief. While basic practical needs are important, she pointed out, so is the feeling that someone cares.

The church can provide both in times of disaster. “I really think that when churches open their doors and at least give them (survivors) a place to connect with another person who might be able to understand, who certainly can offer comfort and hospitality, I think that’s the niche for us,” she said.

Even before a disaster strikes, UMCOR works with the denomination’s conferences on preparation and training. Immediately after, initial grants of $10,000, what Earl calls a “solidarity grant,” are provided.

“In short order, we start looking at how we resource for the next phase and perhaps for long-term recovery,” she said.

Donations can be made to the U.S. Disaster Response Advance #901670 for the United Methodist Committee on Relief.

“All of the main affected areas have been able to send in teams for assessments,” said Greg Ellis, program manager for U.S. Disaster Response at the United Methodist Committee on Relief. “We’re not quite ready yet for volunteers to help. We will put out the information about that when ready.”

Most congregants were well-prepared for the disaster, said Bryan, who credited years of Bible studies, sermons and support for missionary works around the world.

“They were spiritually more ready than we realized,” he said. “All that mission work really builds up compassion and strength over time.”

Up to 75 percent of the damage was to agricultural land, which means that many lost their livelihood for at least a year.

“We’re talking huge areas of pecan trees and cotton destroyed,” Bryan said. “But these are hard-working people. When faced with a catastrophe, they rise to the occasion.”

Friendship United Methodist Church is located in the town that was “ground zero” for Hurricane Michael in Georgia, said the Rev. Nate Lehman, pastor. Miraculously, the Friendship church building was unharmed; a tree did fall in its playground.

“It’s almost like God put a protective dome over our church,” he said. “Compared to the damage around us, it’s very little.”

Some tangled telephone lines and posts formed in the shape of a cross near the church.
But the general area will take years to rebound, Lehman said.

“This is a rural farming community with low income levels,” he said. “Lots of the other jobs are minimum wage and those people are unable to work because things are closed down.”

The United Methodist Committee on Relief already has distributed two $10,000 emergency grants to the Alabama-West Florida and Florida conferences. 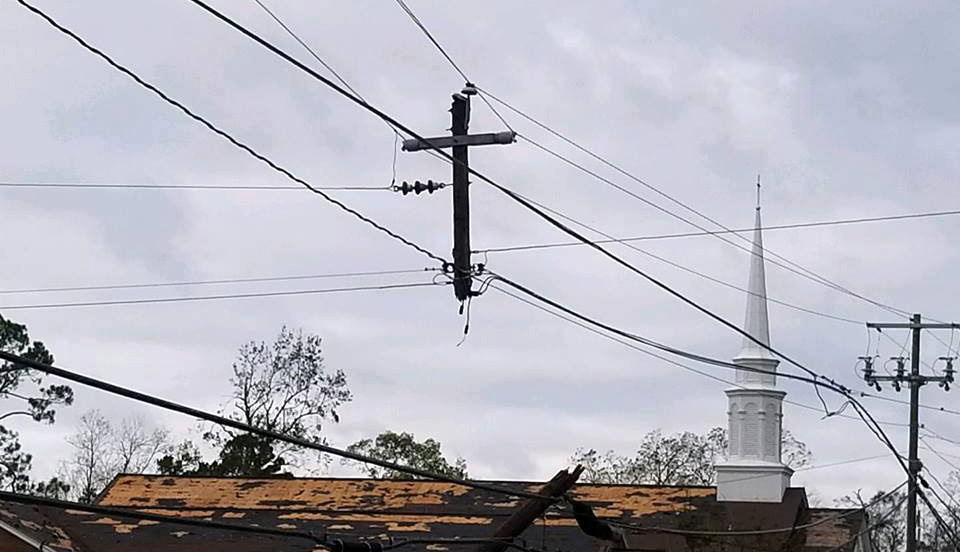