Tall trees have reclaimed what used to be farmland and nearly all traces of the once-thriving businesses, such as the grist mill and blacksmith’s shop, have been erased by time. 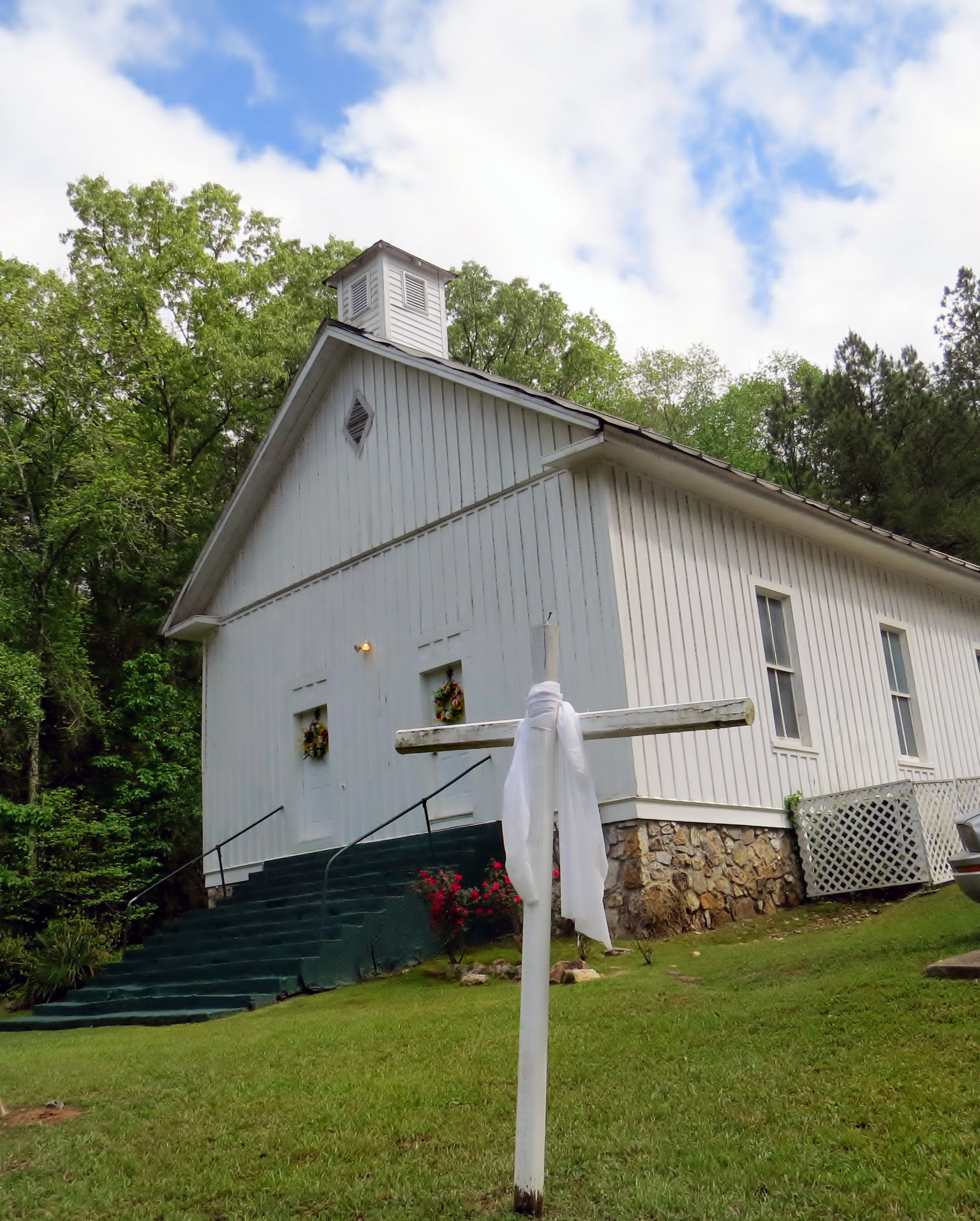 Chubb Chapel United Methodist Church was founded in 1870 by the Chubb family and other black residents of Chubbtown, Georgia. Before and during the Civil War, the Chubbs were free blacks, something rare in the rural South at that time. Photo by Sam Hodges, UMNS."

“There’s no place I’d rather be,” said Kathy Freeman, referring to the church and the surrounding rural community founded by her ancestors. “This is where I feel completed.”

Chubb Chapel United Methodist is at least unusual, probably unique, as a rural Methodist church established by Southern blacks who had been free during slavery days.

The Chubb family settled in this area, about 80 miles northwest of Atlanta, either during or just before the Civil War. They created a self-sufficient farming community called Chubbtown.

And in 1870 — five years after the war and the liberation of fellow African-Americans — they and their neighbors built the church.

The same white frame building, now with indoor plumbing, is lovingly maintained by a congregation of 25 that meets for worship every second and fourth Sunday. It’s the only non-residential structure left of Chubbtown, an unincorporated community near Cave Spring, Cedartown and Rome, Georgia.

Recognized in 1990 by the National Register of Historic Places, Chubb Chapel has enjoyed new attention lately.

It’s featured on the popular website Historic Rural Churches of Georgia. And both CBS and ESPN have done broadcasts on what Chubbtown and Chubb Chapel mean to Nick Chubb, a star running back at the University of Georgia and descendant of the founding family. 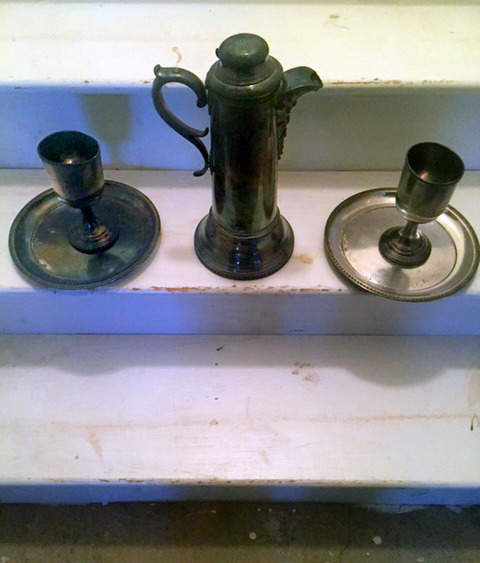 Chubb Chapel United Methodist Church was founded in 1870 by the Chubb family and other black residents of Chubbtown, Georgia. Before and during the Civil War, the Chubbs were free blacks, something rare in the rural South at that time. Photo by Sam Hodges, UMNS.

Each spring Chubb Chapel has a special service that doubles as a fundraiser for maintenance of the church cemetery. This year’s was on April 23. While Nick Chubb didn’t attend — the Georgia Bulldogs’ spring practice game was the day before — the church was packed.

Angie Campbell, another Chubb family descendant, came from Cincinnati. She spent summers here as a girl, going to church and visiting among her relations. And now, more mindful of the historical significance of the world her ancestors created, she gets back as often as she can.

While the overwhelming majority of African-Americans in the South lived in slavery through the Civil War, there were thousands of free blacks, many of them skilled artisans who had managed to earn their freedom.

Most lived and worked in the cities. Free blacks in the rural Deep South were extremely rare.

There were free black Chubbs in North Carolina as early as 1820. Isaac Chubb had moved to North Georgia by 1833, possibly to work in the gold rush that occurred there. 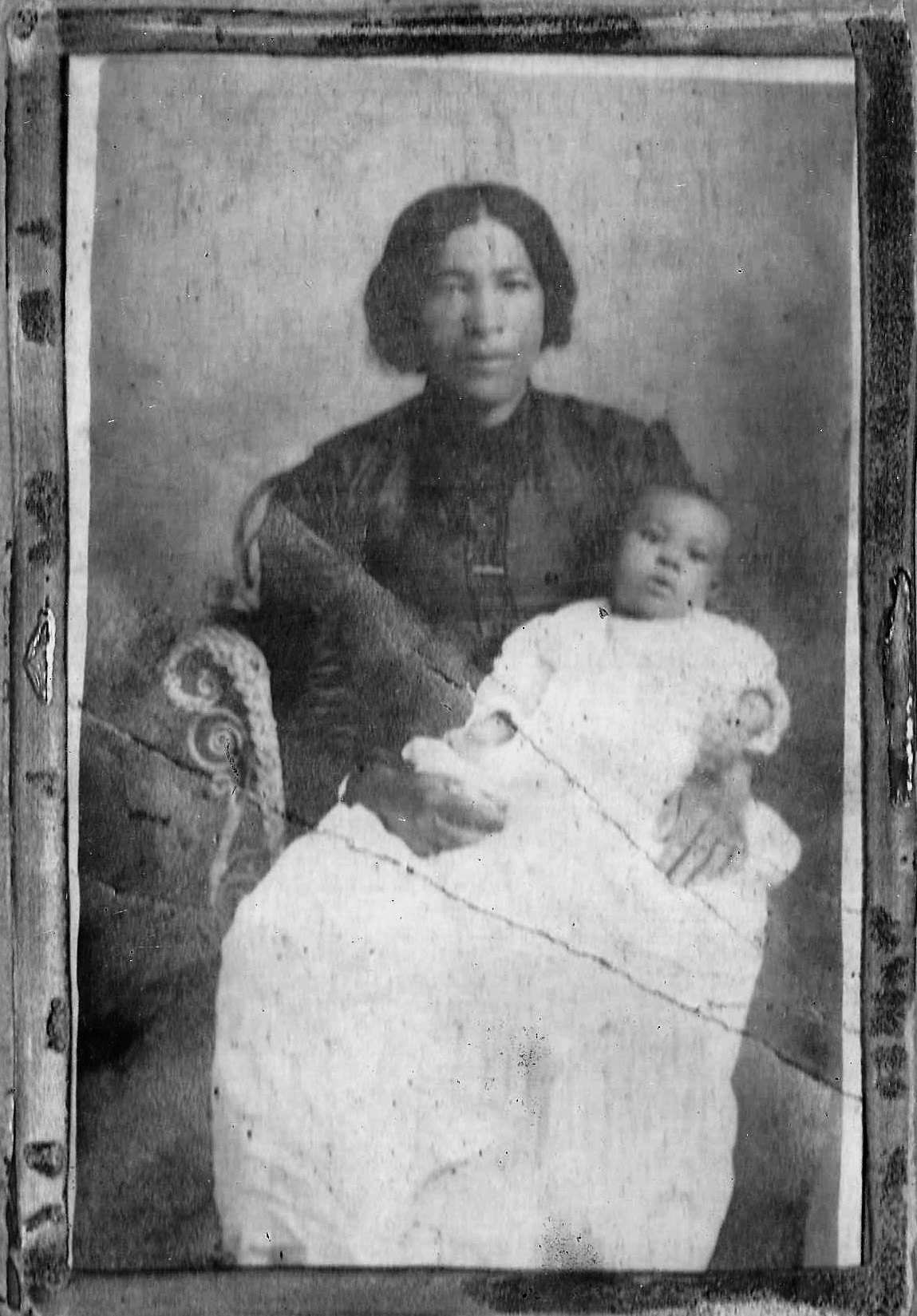 Laura Holiday Chubb holds her baby son Alfred in this undated photo. Mrs. Chubb was the wife of Henry Chubb, a key founder of the historic black Chubbtown community in west Georgia, and of Chubb Chapel United Methodist Church. Alfred became the grandfather of Chubb family members who are active in the church today. Photo courtesy Clemmie Whatley.

At least by 1864, as the Civil War wound down, his sons had bought land in Georgia’s Floyd County, where they established the community that would come to be known as Chubbtown.

Kenneth Jones, a lawyer in Augusta, Georgia, is a Chubb descendent and principal researcher on the family’s history. His work led to the designation of Chubb Chapel United Methodist on the National Register of Historic Places.

But for all his knowledge — and of his respect for what they must have gone through — Jones remains mystified about the Chubbs’ trajectory.

Isaac Chubb had eight sons who are generally credited with founding Chubbtown, with Henry, the second-oldest, considered the leader. But Clemmie Whatley, herself a Chubb descendant and one of the first two African-American women to earn a degree from Georgia Tech, points out that there were also sisters.

“That’s an issue I’m working on, trying to bring to life the women and see their connections,” she said.

One widely-told story is that soldiers under Union General William T. Sherman left the Chubbs alone in the March to the Sea through Georgia.

“He told my grandfather that the Union troops came by, confiscating livestock, and asked who did they belong to, assuming they were slaves,” Jones said. “They said they didn’t have a master, they were free, and they gave them back their livestock.” 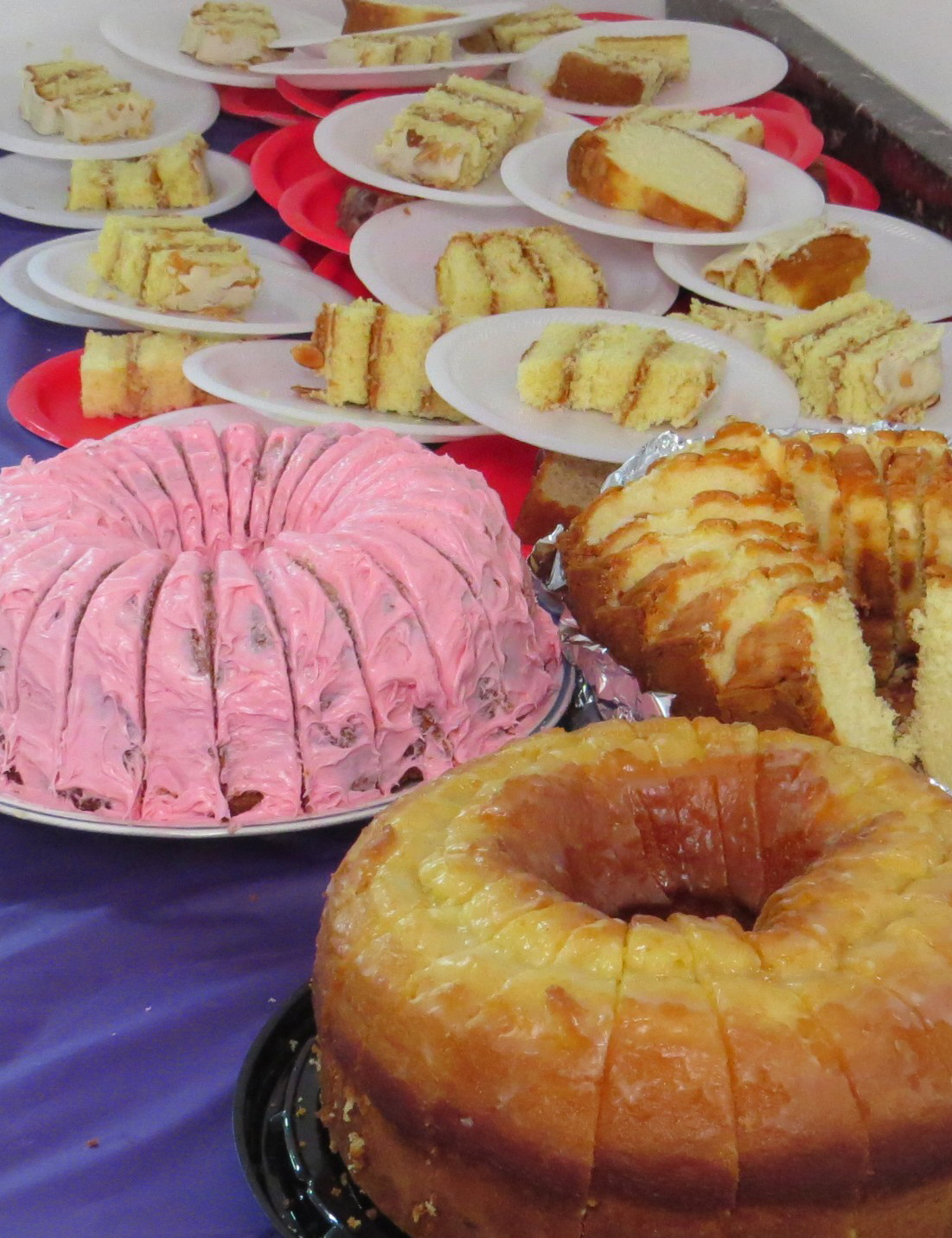 There was no shortage of cake during a lunch between April 23 services at Chubb Chapel United Methodist Church, in Chubbtown, Georgia. The historic black church meets on the second and fourth Sundays of every month, but had a second service on April 23 to raise funds for maintenance of the nearby cemetery. Photo by Sam Hodges, UMNS.

The Chubbs would attract other black families to the community, and over time it included a store, post office, cotton gin, saw mill, syrup mill, wagon-making shop and other farm-related businesses.

Even now, the family has a reputation for skilled work.

“Any Chubb, if you need something fixed up, they’ll figure it out,” Whatley said.

At the center of Chubbtown was Chubb Chapel. The Chubb brothers conveyed an acre to the Methodist Episcopal Church for $200, and Henry Chubb was one of Chubb Chapel’s original trustees.

Located off Chubb Road, and with a rushing creek nearby, the church is a rural adaptation of the Gothic Revival architectural style, built with heart pine. The church served as home to the area’s first black school. Later, Chubbtown children would go to local segregated schools, including Fairview, one of the famed Rosenwald Schools built for African-American children by Julius Rosenwald, president of Sears, Roebuck and Company.

Relations between Chubbtown and its white neighbors apparently were good. A local history written in 1922 describes the Chubbtown residents as “darkeys,” but credits them with “industry and thrift” and notes that they became large landholders.

A flood in 1916 is the likely catalyst for the gradual decline of Chubbtown as a self-sufficient community, Whatley said. Her mother, Elvira Mae Chubb Bray Stone, who died in February at age 97, remembered the location of all the businesses. By the time Whatley and her sister, Cynthia Akers, came along, those were gone, but the church was still a crucial gathering place. 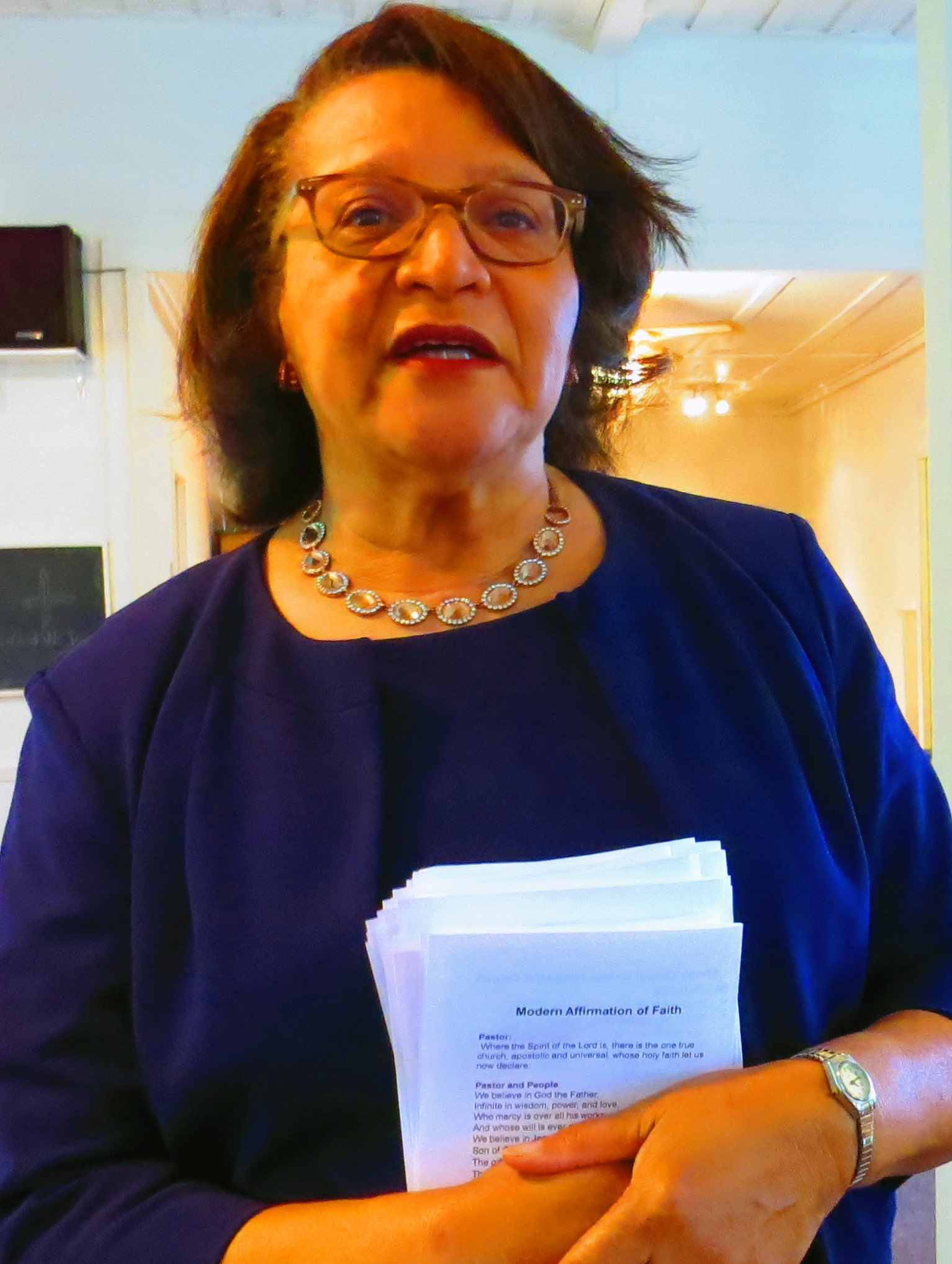 Clemmie Whatley grew up attending Chubb Chapel United Methodist Church, and is among the Chubb family descendants dedicated to preserving both the church and the nearby cemetery. Chubb Chapel is in Chubbtown, an unincorporated area of west Georgia. Photo by Sam Hodges, UMNS.

Whatley learned to play piano and recite poetry at Chubb Chapel. Akers, who lives in Indianapolis and came for the April 23 service, recalled being in plays there as a girl.

“We did (Thornton) Wilder’s ʿOur Town,’” she said.

Descendants of the Chubbs have made their mark in a range of professions, and now are widely scattered. But some continue to live in or near Chubbtown. Even among those who live far away, there are those who tithe to Chubb Chapel, said the Rev. Harvey Palmer, pastor.

Whatley and others said the recent attention to Chubbtown and Chubb Chapel, particularly the award-winning ESPN documentary, has raised pride and awareness among younger church members and Chubb family members.

But the elders aren’t going to let up.

“It’s something we tell everybody, all the kids,” said Kathy Freeman, who moved back home to Chubbtown in 2007. “We want them to know where they came from, who they came from — and how hard they worked.”