"What is God's vision for The United Methodist Church?"

That question was among several fielded by a panel of three bishops, a young adult leader and agency head at the Leadership Summit on April 6. There was a notable pause after the question as the leaders considered how best to respond on behalf of the Almighty.

Finally, Germany's Bishop Rosemarie Wenner took a crack at it. "We took the words of Matthew 28 as the mission of the church, and that really is God's wish for all of us: Making disciples of Jesus Christ for the transformation of the world," she said.

Thousands of church members hoping to make more disciples gathered at sites around the world to participate in the Leadership Summit webcast. Altogether, there were more than 4,000 web connections to the three-hour event. It was the first chance for many to hear how denominational leaders plan to carry out the recommendations in the Call to Action Steering Team's final report to increase vital congregations.

All five panel members were part of the Call to Action team. The team's report adopted by the Council of Bishops and Connectional Table, states that the status quo of a shrinking and aging U.S. church is "toxic" and unsustainable.

The denomination's "adaptive challenge," the report says, is to "redirect the flow of attention, energy and resources to an intense concentration on fostering and sustaining an increase in the number of vital congregations... ."

In short, the panel said, the denomination needs to change how it uses resources and invest more in fostering thriving, disciple-making local congregations. 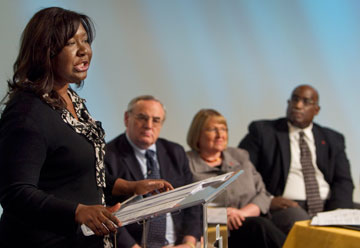 Erin Hawkins (left) addresses the summit. Behind her, from left, are Bishops Larry Goodpaster, Rosemarie Wenner and Gregory Palmer.

Illinois Area Bishop Gregory Palmer, a panel member, told the United Methodist News Service the goal of the summit was to build greater understanding of that challenge.

At the event, he saw United Methodists respond with great love for the church.

"People yearn for local congregations to be effective in the mission and to make a difference together in the world," he said. But he added, "Talking about change is both necessary and threatening."

The panel fielded questions about how to promote evangelism, how to bridge racial gaps within the denomination and how to measure vitality.

In addition to Wenner and Palmer, the panel included Charlotte (N.C.) Area Bishop Larry Goodpaster, Council of Bishops president, Ben Boruff, a young adult and member of the Connectional Table, and Erin Hawkins, the top executive of the United Methodist Commission on Religion and Race.

"When we look at the future of The United Methodist Church, it's one that requires us to take a serious look at how we extend ourselves out into the world in a world that doesn't look like the average United Methodist," she said. 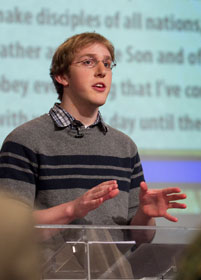 She said it is no longer effective to treat racial/ethnic, youth ministry or women's ministries as add-on ministries.

"Unless we are willing to make the things we consider special interests the main interest or at least equal interest," she said, "I think we won't find ourselves much further down the road."

Another aspect of diversity is age, and Boruff, 21, spoke to how the church in the United States has long struggled to draw in more teens and young adults.

"It would be easy for us to say right now that we need to continue the conversation of how to approach young people," Boruff said. "The hard truth is that this is a conversation we've been having for quite some time."

He pointed out that the terms the church uses on Sunday mornings sometimes do not translate well to younger visitors.

"We need to do an internal audit of how to best communicate the love of Jesus Christ that we have," Boruff said.

Church members following along on Twitter at #umclead also had their own sometimes critical take on the event.

One of the concerns on Twitter and among those questioning the panel was the church's reliance on worship-attendance and membership statistics in measuring vitality. 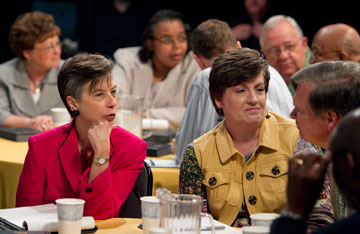 Members of the studio audience take part in a discussion of the denomination's future challenges.

Goodpaster suggested that churches include the involvement and impact of their outreach ministries as part of their "scorecards."

Wenner stressed that counting worshippers is important because that's how a congregation knows that people are joining.

Still, she added, she doesn't consider statistics key to moving the denomination forward.

"It's important to make measurements; however, it's even more important to tell our stories, to share best practices and to learn how other congregations are reaching out," she said. "It's really the spiritual foundation that will bring us forward, not more bureaucracy and more statistics."

The panelists were gratified by the level of participation in the summit, especially from church members in the central conferences outside the United States. For example, some 300 United Methodists in Zimbabwe gathered at the country's world trade center to watch the webcast.

By the end of the three-hour summit, the panel had received 513 questions - far more than the members had time to address in the time allowed.

Palmer said church leaders will aggregate the questions and post responses no later than May 1.

Archives of the April 6 webcast are available for viewing:

Wenner said she hoped the summit was just the beginning of discussions about how the church can better fulfill God's vision.

"Methodism is a mission movement, and it is all about regaining that spirit," she said. "We are privileged to be part of God's mission in this work.

"It's not about building the church. It is about living as the church of Jesus Christ in sharing the gospel."