A long, emotional day of General Conference, with telling though not final votes, left those wanting fuller inclusion of LGBTQ people in The United Methodist Church admitting discouragement.

They witnessed the defeat in legislative committee of the One Church Plan, which would have allowed U.S. churches and conferences to decide whether to host same-sex unions and ordain openly gay persons as clergy.

“There are a lot of crestfallen faces,” said John Hannifan, an observer from Memorial United Methodist Church in Elizabethtown, Kentucky. “The sun might come out tomorrow but it’s a dark day.”

That was not the view of Antoine Umba Ilunga, a delegate from the North Katanga Conference in Congo. He was glad that the Traditional Plan — which would retain church restrictions against ordination of “self-professed practicing homosexuals” and the hosting and performing of same-sex unions by churches and pastors — had enjoyed majority support as it was moved on to the plenary.

Why does he think that plan should prevail?

“Simple reason, because the Bible says a man must be married to a woman,” he said.

Progressives did have a big moment thanks to floor remarks by Jeffrey “J.J.” Warren, an openly gay reserve delegate from the Upper New York Conference. He got a standing ovation as he spoke of his evangelism work with LGBTQ students at Sarah Lawrence College, and his dream of continuing his ministry.

“They didn’t know God could love them because their churches said God didn’t, and so if we can be a church which brings Jesus to people who are told (they) can’t be loved, then that’s what I want our church to be, and that’s the Methodist Church that I love and that I want to be a pastor in one day,” Warren said.

For the Rev. Jay Williams, pastor of Union United Methodist Church in Boston, Warren’s talk was a balm.

“Amazing,” Williams said. “That is the word of God being preached — a word of love and justice. It absolutely gave hope amidst what’s been a devastating day.”

“It was a moment when the spirit was nudging us through the voice of the youth,” he said.

The 22-year-old Warren said after General Conference closed for the day that he had spoken from the heart and felt “overwhelming support” from fellow delegates and others.

“At least 35 percent of the bishops have come up already and said thank you for helping us. That’s been the great affirmation,” he said.

But apart from Warren’s remarks, the day largely belonged to those favoring the Traditional Plan.

The Rev. Rob Renfroe is president of the traditionalist advocacy group Good News, and he used a breakfast briefing to encourage like-minded United Methodists here to continue not to gloat about votes going their way. But he said during the lunch break that he was pleased with the conference so far.

“I think it’s obvious that the delegates favor the Traditional Plan,” he said.

On Feb. 26, the conference’s final day, delegates will likely be making a final decision on that plan, as well as on petitions to ease the way for churches wanting to leave the denomination.

Renfroe said an exit plan is necessary so that churches on “both sides” can leave with their property if they feel they must as a matter of conscience.

He insisted the traditionalist side is not trying to push out those who want full inclusion of LGBTQ persons in The United Methodist Church. But he said the violations of the Book of Discipline need to be halted.

The Rev. Mark Holland leads Mainstream UMC, which lobbied hard for the One Church Plan.

“We were very solid on our U.S. numbers,” he said of the plan’s losing vote in legislative committee. “We needed 50 votes in Africa — clearly we didn’t come close to that.” 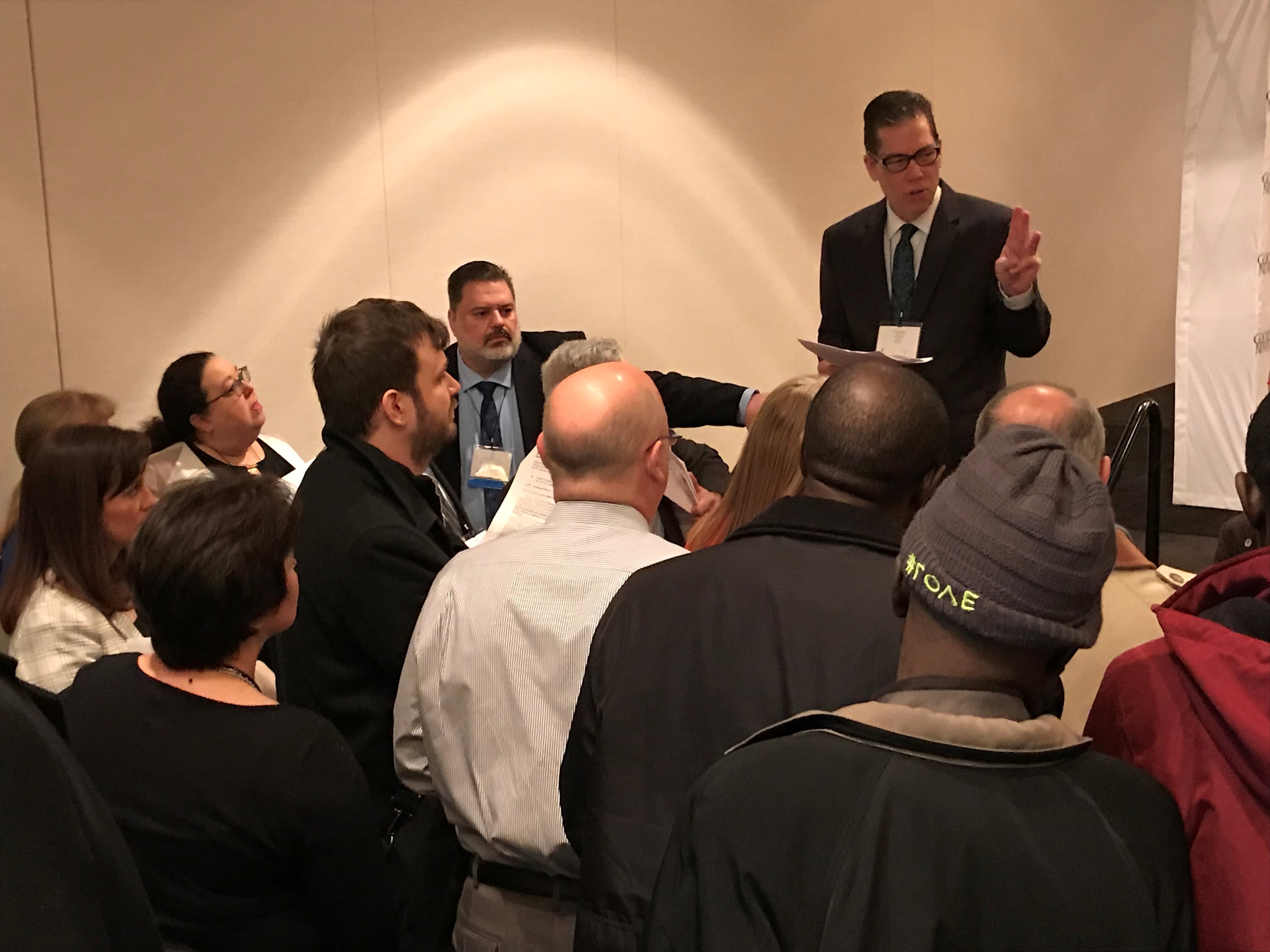 The Rev. Tom Lambrecht gives directions to General Conference 2019 delegates at the Feb. 25 breakfast briefing sponsored by Good News, the unofficial traditionalist advocacy group within The United Methodist Church. Photo by Sam Hodges, UMNS.
The Rev. Paul Escamilla, reserve delegate from the Rio Texas Conference, sported a “One Church Plan” button and was discouraged by how the conference voting had gone.

But not to the point of wanting to bolt.

“Georgia O’Keefe found color in the desert, and I want to also,” said Escamilla, pastor of Laurel Heights United Methodist Church in San Antonio. “I’m not ready to leave our church.”

Bishop Laurie Haller of the Iowa Conference acknowledged that the conference had not gone as she and most bishops had hoped.

“We’re the ones that proposed the One Church Plan, so I’m disappointed that the Traditional Plan has passed (legislative committee) today,” she said. “I know that the final votes are tomorrow.”

Would some progressive churches want to leave the denomination if the Traditional Plan ultimately prevails?

“I suspect that would be the case,” she said.

Haller added that there seems to be support across the theological divide for churches to be able to leave the denomination out of conscience, without burdensome financial penalty.

“I really sense that everybody wants there to be a good outcome as far as how we move on,” she said.

Bishop Paul Leland of the Western North Carolina Conference said he had been “plan neutral,” recognizing divided views among his churches. But he agreed with Haller that any outcome is likely to have fallout.

“We may need to be prepared to say goodbye to some individuals and some congregations,” he said.

“In the final analysis, God is going to take his church where he wants it to be,” he said.