If you remember the first time you heard “Kumbaya,” chances are you were probably sitting around a campfire at a church or scout summer camp.

Because of COVID-19, many United Methodist camps have had to cancel this year. That breaks the hearts of camp leaders who know how important the camp experience is in the faith development of a child, young person or adult.

“Camp is like living out your faith in a unique lab where you can be you without any pressures,” said Jessica Gamaché, director of the United Methodist Camp and Retreat Ministries Association.

Counselor Jennings Winstead talks with campers Luke Woodard and Jeremy Nkulu at Cedar Crest Camp in Lyles, Tenn., in 2017. Because of COVID-19, Cedar Crest is among many United Methodist camps that have had to cancel this year. File photo by Kathleen Barry, UM News.

“The Girl Scouts of the USA, Boy Scouts of America, and Camp Fire have all made the difficult decision to cancel or postpone the vast majority of summer camps,” Scheid said.

“These camps offer opportunities for youth to take a break and grow. There a few that are opening, but they are very few. Instead, each of our partners has begun offering resources to youth directly online. They are partnering digitally with families,” Scheid said.

Gamaché said leaders of United Methodist camps started talking to each other weekly in mid-March when it became apparent many would not be able to hold traditional summer camps.

In announcing the decision to cancel summer camps, the Baltimore-Washington Conference noted camping is one of the conference’s most valued ministries.

“Nearly 15,000 people utilize the BWC’s camping and retreat facilities each year, many of them young people, who encounter God in life-transforming ways at nearly 60 residential and day camp programs each summer,” reads a post on the conference website.

The safety of children is paramount to camping ministry, said Gamaché. The pandemic means “it is a new ministry in a new world,” she said. 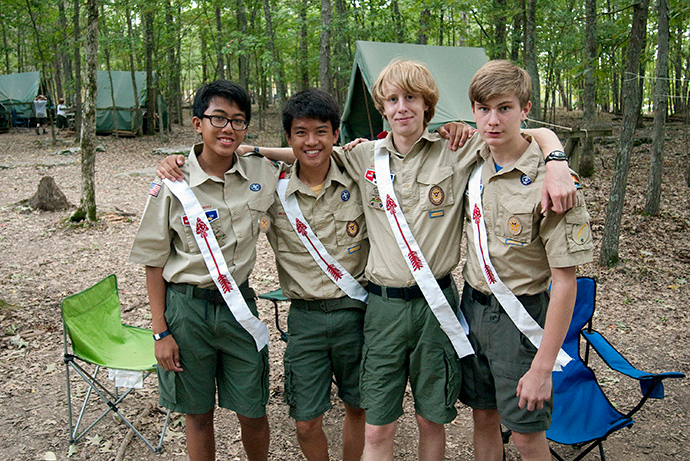 Boy Scouts from Troop 17 in Nashville, Tenn., enjoy time together at Camp Boxwell in Laguardo, Tenn., in 2012. Most scouting programs have postponed or canceled their 2020 summer camps due to COVID-19. File photo by Mike DuBose, UM News.

There are 185 United Methodist summer camp programs in the U.S., Gamaché said, but camping is important in many parts of the world.

“Everything is cancelled this summer” in Norway, said Karl Anders Ellingsen, head of communications for The United Methodist Church in Norway.

“We have a large (for us) summer gathering each year in Stavern on the southern coast. There are seminars for all ages, children’s camp, youth camp and inspirational gatherings in a local sports hall. There are also Scout camps usually,” he said.

The conference is still planning to have digital gatherings on social media, he added.

The Federal Council of Switzerland announced that it will be possible to have children’s camps with up to 300 participants provided that there are appropriate safety measures, said Urs Schweizer, assistant to Bishop Patrick Streiff in the Central Conference of Central and Southern Europe.

“This means that there will certainly be a number of United Methodist camps for children and teenagers. I do, however, not know whether all camps that had been planned for summer 2020 will really take place because for some groups, this decision might have come too late,” he added. 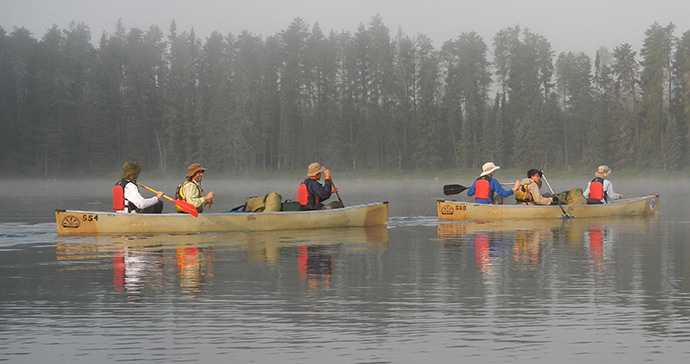 Boy Scouts and leaders from Troop 17 in Nashville, Tenn., paddle through the Turtle River-White Otter Lake Provincial Park near Atikokan, Ont., Canada, in 2012 during a summer program at the Northern Tier High Adventure Base. Most scouting programs have postponed or canceled their 2020 summer camps due to COVID-19. File photo by Mike DuBose, UM News.

Amanda Daniell, coordinator of young people's ministry and camping ministry for the Mountain Sky Conference, said each of the seven camps in the conference has weighed their options and made decisions based on local, state and CDC recommendations.

For example, Buckhorn Camp in Bellvue, Colorado, decided to open its rustic cabins in June, July and through mid-August to rent in two to four-night packages for families. Some of the other conference camps will limit the number of campers in each session, while others plan to operate later sessions from July-September, Daniell said.

The California-Pacific Conference has closed traditional camps for the summer.

“Summer camp will be greatly missed by all who have been looking forward to it, especially this year!” wrote the Rev. David Berkey, director of camp, retreat and discipleship ministries for the California-Pacific Conference.

“There is a great longing for time outdoors together with God and the camp community. Our theme is ‘Lift Our Hearts!’ from Psalm 121,” Berkey said.

Gamaché said leaders have come together in unique ways because of COVID-19.

“At its heart, camping is unchanged. It is about spiritual development and safety. We are being very intentional about not losing the heart of camps,” she said.

Because many camps and retreat centers had to be closed in the spring and summer, conferences are asking for donations to support their ongoing ministry.

“Our centers have ongoing expenses for maintenance, staff, utilities and insurance without any spring or summer revenue from camp and retreats. By giving now, you help ensure we will be  able again to provide vital ministries to all as we reopen,” said Berkey.

Small, rural churches struggled through the coronavirus pandemic, but many of them are now enjoying the return to in-person services and looking to the future.
Local Church

People mistrustful of other institutions may still trust their faith leaders to address their concerns about getting a COVID-19 vaccination.