Jan. 19 Update: The Rev. Cynthia Meyer now faces a complaint for being a “self-avowed practicing” gay clergy member, a development she said she expected.

Meyer met with Bishop Scott J. Jones at the Great Plains Conference office in Topeka, Kansas, on Jan. 15, 10 days after a complaint was filed against her. A crowd of supporters, organized by some of her clergy friends, stood outside the meeting in the cold, singing hymns and praying. Meyer estimated about 100 people were there.

“It was really wonderful and so encouraging,” Meyer said. “There were friends and also folks I had never met.”

The Jan. 15 meeting was part of the supervisory response process detailed in the Book of Discipline, the denomination’s law book. No action was taken during the meeting, reported Todd Seifert, Great Plains Conference director of communications.

“This is the normal way in which a minister’s relationship to the church is reviewed when an allegation of violation of church discipline has been made,” Jones told Seifert. “As bishop, it’s my job to conduct a supervisory response and today was the next step in that process.”

Meyer said she is hoping to work toward a just resolution in the case, which would avoid a church trial. The Book of Discipline defines a just resolution as “one that focuses on repairing any harm to people and communities, achieving real accountability by making things right in so far as possible and bringing healing to all the parties.”

The book allots 90 days after a complaint is filed for the supervisory response process, with the possibility of a 30-day extension.

A United Methodist pastor came out to her Kansas congregation during a Jan. 3 sermon in this year’s first public action aimed at influencing the 2016 General Conference.

“I have been an ordained United Methodist pastor for 25 years. At last, I am choosing to serve in that role with full authenticity, as my genuine self, a woman who loves and shares my life with another woman,” said the Rev. Cynthia Meyer during her sermon at Edgerton United Methodist Church. Meyer has served as the church’s pastor since July.

Her announcement comes as United Methodists across the theological spectrum are gearing up for the denomination’s top lawmaking assembly, where the church’s stance on homosexuality usually tops the controversy list.

The Book of Discipline, the denomination’s book of policy and teachings, since 1972 has proclaimed that all individuals are of sacred worth but the practice of homosexuality “is incompatible with Christian teaching.”

Church law lists being a “self-avowed practicing” gay clergy member and officiating at same-sex unions among the denomination’s chargeable offenses. That means Meyer could face a church trial and potentially lose her clergy credentials.

Bishop Scott Jones leads the Great Plains Conference where Meyer serves. He is “aware of the situation involving the Rev. Cynthia Meyer, and the processes provided for in the Book of Discipline are being followed,” said Todd Seifert, the conference’s director of communications. “The bishop will share more information as it becomes appropriate to do so.”

Only General Conference can change these church policies, and the body will face multiple proposals regarding the church’s homosexuality stance when it meets May 10-20 in Portland, Oregon. 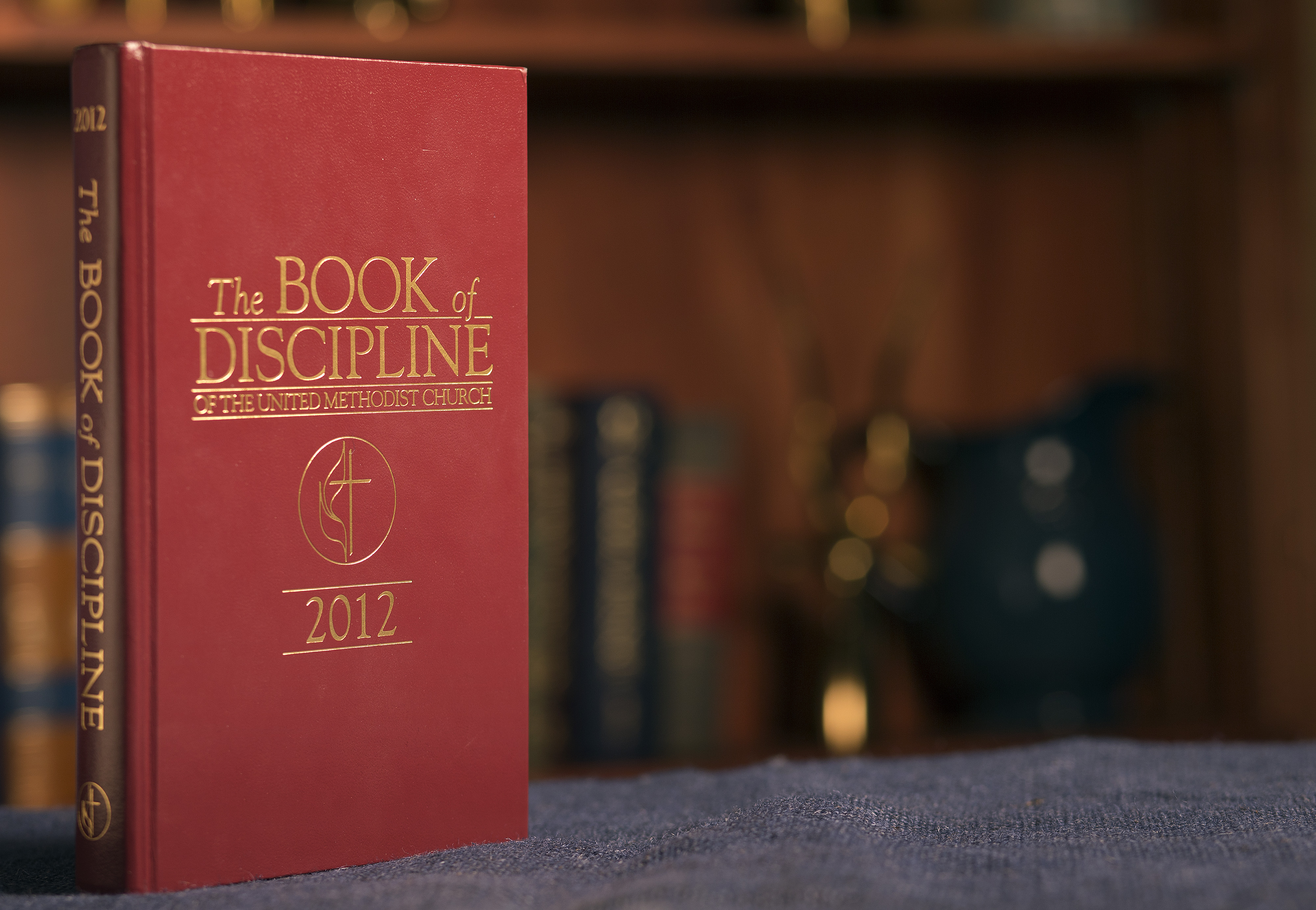 The statements in the Book of Discipline regarding homosexuality have sparked debate at each General Conference since 1972. Photo by Mike DuBose, United Methodist Communications

Some of those proposals come from unofficial United Methodist advocacy groups that champion varied perspectives.

Meyer made her announcement in partnership with the Reconciling Ministries Network’s “It’s Time” campaign.

The group, which videotaped her sermon and publicized it, seeks to change the church’s stance and advance what the group calls LGBTQ rights. The initials stand for lesbian, gay, bisexual, transgender and queer or questioning.

“My decision to speak out and do that through a sermon for my congregation came long before the ‘It’s Time’ campaign,” Meyer told United Methodist News Service. “I’d say it’s been a calling on my heart for quite some time.”

Still, she said she hopes the partnership with the campaign will help make a difference in delegates’ views and votes. The campaign also includes the release of a documentary film, “An Act of Love,” about the Rev. Frank Schaefer.  The clergyman was convicted of officiating at the same-sex marriage of his son, but was later reinstated as clergy by a church court.

The Rev. Thomas Lambrecht, vice president and general manager of Good News, said the announcement fits the pattern of Reconciling Ministries “ramping up pressure before General Conference.” Good News seeks to defend what it sees as historic church teachings.

Good News doesn’t have a named campaign, but it does have a slate of legislation it is promoting. While Good News did not draft the legislation, Lambrecht said the group endorses the Covenantal Unity Plan. That plan includes proposals to strengthen penalties for those convicted of chargeable offenses as well as making it easier for clergy and congregations that disagree with church teachings to leave the denomination.

“There is a lot of legislation we’ve proposed that goes beyond that, but we think that the Covenantal Unity Plan is a good start at restoring the unity based on covenantal accountability in the church,” he said.

In addition to serving other churches in Kansas, Meyer also spent 12 years as dean of students at United Methodist Candler School of Theology at Emory University in Atlanta, where she first met Berryman when he was a student.

“You don’t have to go very far, particularly in the Southeast of the U.S., to find a United Methodist clergy person who was touched by Cynthia,” Berryman said. “As we know, when it’s somebody we care about, it changes the game.”

How the church is responding

Meyer said the Edgerton congregation, which has about 200 members, has been “beautifully supportive and affirmative.” The semi-rural church is about 40 miles from Kansas City, Kansas.

“We have a loving congregation, and they responded very lovingly,” agreed Chris Kerr, who has held multiple leadership positions in the church. “Naturally, there are some members who are struggling with this. We just really want to live out the ‘Open Hearts, Open Minds, Open Doors’ (denominational slogan) and keep the church open to everybody no matter what their views are.”

Kerr was among a small group of parishioners Meyer talked to about her announcement in advance of Sunday sermons. Kerr said no members were irate, but said the church does plan further discussions about what Meyer said and what it could mean for the congregation.

The consequences for Meyer are still unknown. In the past two years, a number of clergy who have officiated at same-gender weddings have resolved their cases without a church trial.

However, in a January 2014 sermon titled “Unity of the Spirit in the Bond of Peace,” Bishop Jones told a gathering of Great Plains clergy that if 100 pastors perform same-gender unions, “Then there will be 100 suspensions from ministry during the supervisory response followed by 100 trials.”

Jones added that “not to hold a trial when a chargeable offense occurs and a just resolution cannot be achieved is to violate our United Methodist identity.”

In 2015, his conference ─ representing United Methodists from Kansas and Nebraska ─ voted to submit legislation to the 2016 General Conference that says there are “diverse beliefs regarding homosexuality.”

The petition would strike references of homosexuality being incompatible with Christian teachings and would eliminate restrictions against practicing homosexuals being certified as candidates, ordained as ministers or appointed to serve in the church. The petition also would eliminate the performance of same-sex unions from the list of offenses that would initiate a church trial.

However, General Conference has not acted on that proposal yet, Lambrecht said, and he expects church leaders to uphold the church teachings.

“A denomination that cannot enforce its requirements and hold its members accountable is really a dysfunctional denomination,” he said.