The attention of the denomination will be focused beginning July 18 on the jurisdictional conferences, where 11 new U.S. bishops are expected to be elected in three jurisdictions.

The Council of Bishops establishes the beginning dates for the five U.S. jurisdictional conferences. Central conferences groups of annual conferences in Africa, Europe and the Philippines follow similar procedures to elect and assign bishops; however, they do not meet at the same time, and bishops are not elected for life as they typically are in the United States.

Bishops are elected elders, and they are recommended to a particular episcopal area by a jurisdictional committee on the episcopacy comprising one lay and one clergy member from each annual conference in the jurisdiction. The assembly approves the assignments or asks the committee to go back to work. Simultaneous meetings permit the rare assignment or election of bishops across jurisdictional boundaries.

Number to be elected

The candidates; those retiring

Bishops must retire if they reach age 68 on or before July 1 of the year of jurisdictional conferences. They may choose to retire earlier.

General Conference approved a plan that will result in one fewer bishop in four of the five U.S. jurisdictions beginning this year.

The following three jurisdictions will have elections:

A jurisdiction's committee on episcopacy may by a two-thirds vote place the bishop on what the Book of Discipline calls retired relation. If the committee were to take this action, Bledsoe could retire, or he could appeal to the Judicial Council, the denomination's equivalent of the U.S. Supreme Court.

Before any appeal, the bishop would have to be reassigned to the area. If Judicial Council were to uphold the mandated retirement, a retired bishop likely would replace Bledsoe or the South Central College of Bishops could call for a special session of the jurisdictional conference to elect a new bishop. Don House, chair of the South Central Jurisdictional Committee on Episcopacy, said the panel will meet July 16 in Oklahoma City for a hearing on Bledsoe before the opening of the conference.

Jurisdictions with no elections

The North Central Jurisdiction will honor Bishop Linda Lee on her retirement. It also will receive a request from the newly formed Dakotas-Minnesota Episcopal Area for funding of the expansion of a comprehensive high-quality video conferencing system to allow the bishop, cabinet, staff and local churches to communicate effectively over the 234,755-square-mile area, and it will nominate people to serve on the jurisdictional and general church agency boards.

The Western Jurisdiction Conference will honor host Bishop Mary Ann Swenson upon her early retirement and will nominate people to serve on jurisdictional and general church agency boards. Bishop Minerva Carcaño will deliver the episcopal address, and the assembly will focus on "extravagant hospitality" as it relates to immigrant brothers and sisters. Delegates also will continue the journey of healing relationships with indigenous peoples begun at General Conference and discuss plans for starting new churches.

There are 44 episcopal candidates now nominated in the 2012 elections. Delegates are free to vote for whomever they feel is most qualified and not bound to support their conference nominee. Each jurisdiction is allowed to establish the percentage required for election. The percentage is generally set at 60 percent of ballots cast.

The voting process differs among jurisdictions, but provision must be made for delegates to vote for people who have not been nominated or endorsed. Conferences must provide information about people who receive 10 votes or 5 percent of the votes cast on any ballot.

Most jurisdictions now use electronic voting rather than written ballots. 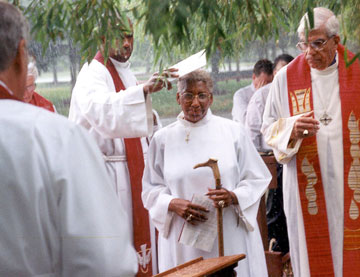 Alfred Johnson (left) tries to keep the rain out of the Rev. Violet L. Fisher's face during her service of consecration as a bishop in Somerset, N.J., in 2000. To her right is Bishop George W. Bashore. A UMNS photo by Dean Snyder.

The number of required ballots varies from year to year. Occasionally a candidate will be elected on the first ballot, but generally several ballots are necessary. Some jurisdictions drop names of people who receive fewer than five votes. People who receive only a few votes will frequently ask supporters to vote for another candidate on a future ballot. Voting by ballot continues until someone reaches the required number of votes.

The record for lengthy elections was established in 1980 in the Western Jurisdictional Conference. In that year, the Rev. Calvin McConnell attended as chair of a Rocky Mountain Conference campaign to elect the Rev. Jamison Jones to the episcopacy. After 47 ballots, however, McConnell was elected to that office. "I hope no one ever comes near to that many ballots," McConnell told the United Methodist News Service.

The new bishop's consecration service was scheduled for 1 p.m. but, since McConnell was not elected until 5 p.m., the service was at 9 p.m., long after the other four jurisdictional conferences had adjourned. "I had to borrow a white shirt, tie and robe for the service," said the now-retired bishop.

Candidates for bishop do not have to live within the jurisdiction where they are elected. In 1984, the Rev. Leontine T.C. Kelly, who died June 28, 2012, at the age of 92, was serving as pastor of a church in Richmond, Va. part of the Southeastern Jurisdiction when she was elected bishop in the Western Jurisdiction. She flew from the Southeastern conference to the Western conference when she learned she was a leading candidate in that jurisdiction.

Bishops may be assigned to the same area for up to three quadrennia. Assignments take effect Sept.1, 2012.

A newly elected bishop may not be assigned to the episcopal area in which he or she holds membership unless two-thirds of the committee on episcopacy members decide to ignore that restriction.

After the election of new bishops, each jurisdiction committee on episcopacy recommends to the jurisdictional conferences the assignment of bishops to their episcopal areas. New bishops are consecrated, not ordained. They remain elders in the denomination, but they become ordained members of the Council of Bishops instead of an annual conference.