This week, United Methodists joined the citizens of Joplin, Mo., in marking the progress made in the year since a devastating tornado wiped out a third of the city.

Thousands celebrated a "Day of Unity" May 22, which also was a time of remembrance for the 161 people who perished because of the tornado.

According to an Associated Press report, the worst U.S. tornado in more than half a century damaged or destroyed more than 8,000 structures, directly affecting at least 17,000 people. The financial costs - totaling about $2.8 billion in damages - were staggering, and the state insurance department expects insurance payouts to reach nearly $2 billion.

Despite those losses, substantial progress has been made toward recovery. Disaster response through the United Methodist Missouri Annual (regional) Conference is "well ahead of where we expected to be a year ago," said Jeff Baker, the conference disaster response coordinator. Factors contributing to that success included more than $1 million in donations, an expedited debris-removal process and unusually warm weather in the winter and spring.

The amount of money on hand recently doubled. The United Methodist Committee on Relief awarded the Missouri Conference a $500,000 grant for additional disaster response work in Joplin. That money will go primarily toward repair and rebuilding work.

He spoke about lessons learned in Joplin since the tornado. "We can define our lives not by what happens to us, but by how we respond," the president said in his address. "We can choose to carry on. We can choose to make a difference in the world. And in doing so, we can make true what's written in Scripture - that 'tribulation produces perseverance, and perseverance, character, and character, hope.'"

Obama also mentioned the name of Will Norton, who died while driving home from last year's graduation. Will's parents, Mark and Trish Norton, are members of St. Paul's United Methodist Church and were one of three families featured in a May 20 sermon by the Rev. Aaron Brown, senior pastor, marking the anniversary. 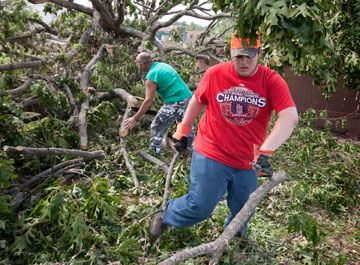 Volunteers Jacob Burrow (front) and Mark Swyden clear trees downed by the tornado in Joplin, Mo., in May 2011. In 2011, volunteers organized through the Missouri Conference contributed 16,371 hours to Joplin's recovery.

The tornado left St. Paul's 9-year-old worship center in ruins and caused major damage to the church's family life center. Still, the congregation managed to rebound quickly. Church offices were open again in a week and the preschool and day-camp programs operational within three weeks. That was important, Brown noted in his sermon, because 17 other day-care centers had been destroyed. "It was just one way we knew we could help our community recover and rebuild," he said.

About 20 people volunteered as "shepherds" to assist the 400 members of St. Paul's directly affected by the tornado. Ninety-nine families lost their homes completely, and another 61 families temporarily were displaced because of damage. The congregation worshipped in the Ozark Christian College chapel for five months before moving back to the St. Paul's campus.

In addition to the major damage at St. Paul's, St. James United Methodist Church was reduced to a pile of rubble. Other churches that sustained little or no damage served as shelters and depots for emergency supplies.

During the past year, congregations throughout Joplin and the Missouri Conference have not forgotten their commitments to ministry, their communities and each other.

United Methodists outside Missouri have joined them in recovery efforts. At times last summer, there were as many as 400 people a day volunteering in Joplin through the Missouri Conference. The conference's Office of Creative Ministries partnered with AmeriCorps and Rebuild Joplin on job assignments for volunteers.

In 2011, volunteers organized through the Missouri Conference contributed 16,371 hours to Joplin's recovery. In August, for example, a group of United Methodist Men broke up concrete foundations that needed to be removed.

In the first four months of 2012, Missouri Conference volunteers worked 22,108 hours. Volunteer coordinators from throughout Joplin are expecting as many 2,000 to 3,000 volunteers per week during June and July.

*Bloom is a United Methodist News Service multimedia reporter based in New York. Follow her at http://twitter.com/umcscribe. The United Methodist Missouri Annual Conference provided information for this report.