It is time for The United Methodist Church to overcome its qualms about evolution for the sake of our children, each other and the future of society to work together in accepting the findings of science. Together we need to correct the misconceptions and discard the myths.

Eugenie C. Scott, the executive director of the National Center for Science Education, says that rejecting evolution puts at risk the high level of scientific achievement that has helped propel the United States to a position of economic, technological and political leadership.

Interestingly, delegates to The United Methodist Church's 2008 General Conference overwhelmingly passed three petitions clarifying the denominational position regarding evolution. One endorses The Clergy Letter Project that provides resources for churches on this subject.

Let me combine information from Scott with some from additional sources to help explain what the problem is and how to solve it.

The concept of biological evolution is the fundamental cornerstone — the glue, so to speak — that binds together the biological sciences. Evolution is also practically important for things held dear to religion. Humans use evolution daily to understand disease, create pharmaceuticals, increase agricultural yields and much more.

Within the scientific community, evolution has long been accepted worldwide. Almost every organization of professional scientists has endorsed the teaching of evolution as an integral part of science education. A 2009 poll of U.S. scientists showed that 97 percent accept evolution over creationism; among life and earth scientists, the percentage is even higher (99.85 percent).

Still, many people do not understand evolution, and misconceptions are rampant. Here are a few of the most common.

Evolution is only a theory. In popular parlance, a theory is a hunch or a guess. But in science, a theory such as evolution is an explanation of observations based on well-substantiated evidence. Some people think that in science, you have a theory, and once it's proven, it becomes a law. That's not how it works. In science, a law describes facts, while a theory explains them. In short, a theory in science is the top level.

Evolution is scientifically controversial. Not so. The basic idea of evolution has long been accepted. However, science is still finding and debating processes of evolution. There is a significant difference, however, between debating small details to challenging the overall concept, and scientists are not doing the latter.

Humans evolved from apes, chimps or monkeys. Not exactly. You and I are not descended from any of the apes or monkeys alive today. Biology has shown, like it or not, that we share common ancestors with them, perhaps as "recently" as 10 million years ago. We are distant cousins of the apes.

Part of the reason these misconceptions continue may simply be poor science education. But part of the reason is clearly due to religious qualms about evolution. Why do some religious people find it difficult to accept these findings of science, which we all would agree are acquired with God-given intellect?

Often before science explains a phenomenon, religion will come up with, or endorse, a non-scientific guess. Such was the case with guesses that the Earth was flat, that Earth was the center of the universe and that living things were separately created. Then when science explains the phenomenon, it is hard for people of faith to abandon the guess. This is exactly why using God to fill in gaps of scientific understanding (relegating God to being a "God of the gaps") is theologically undesirable. 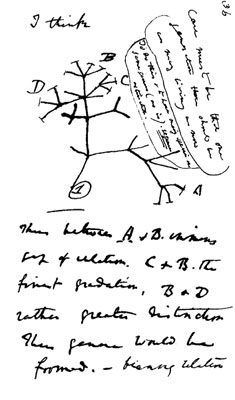 Charles Darwin's first diagram of an evolutionary tree from his First Notebook on Transmutation of Species (1837) on view at the Museum of Natural History in Manhattan. Web-only photo courtesy of Wikipedia.

Myths about science and religion

Complicating matters are many myths about science and religion. Again, I will list some of the most important ones.

Science is tantamount to atheism. Not so. Science deals only with evidence or ideas that can be tested. But God cannot be confined to a test tube. Within the ranks of scientists, one can find a wide divergence of beliefs about God - from atheists like Richard Dawkins to strongly committed believers like Francis Collins of Human Genome Project fame, now director of the National Institutes of Health. They disagree about God, but they agree about evolution.

Evolution is in contradiction to the inerrant word of God. Some religious people think that taking the Bible seriously means rejecting evolution. The problem is an unwillingness to interpret the Genesis creation stories in ways consistent with what we know from science about God's creation or from how other portions of the Bible are interpreted (metaphorically).

Churches and religious leaders reject evolution. Not so. From Pope Pius XII's 1950 encyclical "Humani Generis" to United Methodism's endorsement of the Clergy Letter Project in 2008, many churches and religious leaders have officially accepted evolution. Regrettably, in many denominations including The United Methodist Church, the news has not reached the entire membership.

*Kuelling, a member of First Wayne Street United Methodist Church, Fort Wayne, Ind., is retired from a career in physics. He wrote two of the petitions accepted at the 2008 General Conference related to science and faith.

Can Christians embrace faith and science?

Commentary: The Faith-Science Collision on Campus

Science vs. religion is not an 'either/or' issue

A Hopeful Earth: Faith, Science, and the Message of Jesus