Now that the 2012 General Conference has ended, United Methodist leaders across the nation turn to jurisdictional and annual conferences coming up this summer.

Fourteen U.S. bishops and two central conferences bishops will retire this year. The North Central, South Central and Western jurisdictions each will lose a bishop's position, while the Congo Central Conference will gain a bishop.

New U.S. bishops will be elected during jurisdictional conferences July 18-21. Central Conferences are the outside-U.S. equivalent of jurisdictions, and like jurisdictions, they have multiple annual conferences. They will meet at various dates ranging from August to December 2012, and will elect or re-elect six bishops. The Central and Southern Europe central conferences will not meet until March 13, 2013, but they will not be electing a new bishop. 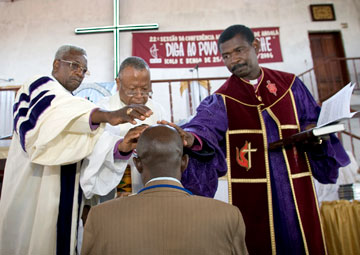 The following bishops are retiring this year:

After the 2008 General Conference when bishop retirement age was raised from 66 to 68, Bishops Jane Allen Middleton and William Hutchinson were given the option of maintaining their positions four more years. The two bishops will both retire this year at the ages of 71 and 70, respectively.

Bishops are permitted to serve up to three consecutive four-year terms in one episcopal area. In each jurisdiction, a committee on episcopacy - made up of one clergy and one lay delegate-reviews the bishop's work and character and proposes a new assignment. The Jurisdictional Conference then has the ability to accept or reject the assignment.

Bishops elected at the 2012 Jurisdictional Conferences will begin their new assignments Sept. 1.

See a schedule for dates of all annual conference sessions

*Snell is a freelance writer in Nashville, Tenn., and a former intern with United Methodist News Service.