You could say that Cynthia Rives was raised from the cradle to be part of United Methodist Women.

As a child, she attended activities with her mother, an officer in the denomination's New Mexico Annual (regional) Conference. As a bride of 20, she joined on her own. Over the years, in New Mexico, Arizona and Texas, she has always found mentors and friends through UMW "wherever I've gone."

Now, as president of the Central Texas Conference UMW, Rives, 61, is excited and supportive as UMW starts a new chapter of its 143-year-old existence as a mission movement for women within The United Methodist Church.

"No change is an indication that something is inert," she said. "We have always been changing."

On May 1, the 2012 United Methodist General Conference approved legislation to separate UMW and its administrative body, the Women's Division, from the Board of Global Ministries, to which it had been related for decades.

The move to independence is a nod to denominational pioneers - women who ran their own foreign and home missionary societies, dating as far back as 1869, until those groups became part of larger mission boards, says Barbara Campbell, a retired Women's Division executive and de facto UMW historian.

Further changes in women's mission work occurred through what became known as the "agreements of 1964," triggering, she believes, "a long, long list of unanticipated consequences" and concerns over how mission money raised by women "was being integrated in other parts of the board."

The new structure approved last month is "an important and strategic move" to re-assert control over assets, institutions and missional directions, Campbell said.

Harriett Olson, UMW's top executive, considers the organization's new independence as an opportunity to expand on its tag line "Turning faith, hope and love into action."

The process of separation began three years ago, under the leadership of Olson and Thomas Kemper, top executive for Global Ministries, as a "proposed strategic direction" was accepted in principle. 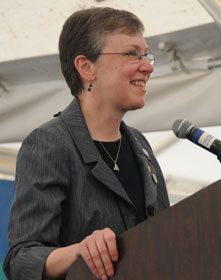 Harriett J. Olson, chief executive of United Methodist Women, speaks at the May 1 luncheon for delegates, which was sponsored by Ministries With the Poor. A UMNS photo by John Goodwin.

"We're trying to create a new pattern of being together&ellipsison strategy and planning work," Olson explained.

Kemper noted that the UMW regional missionaries would continue to be dispatched through the Board of Global Ministries, and a joint collaboration is planned on the annual Prayer Calendar. Representatives of the two organizations will meet in September at the United Methodist-owned Church Center for the United Nations to discuss how UMW can represent the mission agency for all U.N.-related work, he added.

Another change approved by General Conference transfers oversight of the Office of Deaconess, a lay ministry of service which dates from 1888, and the home missioner program, established in 2004 for lay men, from Global Ministries to UMW.

Campbell, a deaconess herself, hailed the restoration of the historic relationship between deaconesses and Methodist women in mission, noting that the program had suffered a decline after General Conference legislation in 1996 had trouble defining the role of deaconesses. With the establishment of a new recruitment plan, "the results are now evident," she said, pointing to the commissioning of 17 deaconesses and home missioners in April.

The Board of Global Ministries will continue to give priority to serving the needs of women and children. "It has to be mainstreamed in all areas of our work," Kemper explained.

But, he considers the separation a positive move. "I think it's a liberating act in a way," he said. "It gives both organizations a chance to sharpen and focus their identities."

Beyond their own organization, Olson wants to engage UMW members in conversation about how best to position the work of the United Methodist commissions on Religion and Race and the Status and Role of Women, which, she said, have "significant synergy" with UMW goals and "real relevance for our work and our members."

M. Garlinda Burton, top executive of the women's commission, agrees that mission cannot be separated from advocacy for women and is looking forward to building on the continuing relationship between the two agencies.

"General Conference showed us that gender issues and issues of racism, particularly in the United States but also internationally, are with us in more sophisticated forms," she said. "We have to talk about what it means to be a more diverse church."

She also finds it "empowering" that a new advisory group for UMW will ensure that every conference has representation in the decision-making process. "That's something I don't think has ever happened," she added.

New members for the 25-member UMW board of directors were elected at UMW jurisdictional meetings in June, with additional nominations to ensure diversity to be made in July and elected at an organizational meeting in August.

Management of the organization's staff will transfer from the Board of Global Ministries to UMW on Oct. 1. The staff will remain at its headquarters in the Interchurch Center in New York.

The board of directors will meet annually in the fall, and a program advisory group of 70 to 80 members, including the board, will meet each spring.

UMW will have oversight of the denomination's deaconess and home missioner programs. UMW members will continue to be organized at the jurisdictional, conference, district and local church levels.

With activities ranging from workdays at a community center to mission trips to meal-packing events for the hungry around the world, Central Texas women try to be "the action part of love in action," Rives said.

"We try to be fearless in our mission," she added, describing the connections made with local communities. "We're seeing ourselves as partners in mission and try to be supportive of other agencies and activities that are going on."

The new structure will assist in those efforts. "It makes it clearer who we are and what we have done and are doing in our work," she explained.

To assist conferences like Central Texas, UMW is making leadership training available for more of its members. "We've always believed in supporting our members and our leaders through training," said Julia Tulloch, UMW staff executive. "We want to open it up."

Three leadership-development events already have been scheduled: Nov. 16-18 in St. Louis; Jan. 10-13 at Lake Junaluska, N.C.; and Jan. 24-27 at a location to be determined in the Western Jurisdiction.

A focus on organizational skills will be interspersed with "core sessions" on spiritual grounding in the theology of mission, connecting to social justice and an overview on women as leaders in the church, Tulloch said.

The commitment of members to the work of UMW is financial as well as spiritual. During the past four years, the organization allocated more than $9 million in grants to some of its 97 national mission institutions. Those institutions 67 of which are community centers employ about 6,300 people and serve 535,000 clients each year.

Another $9 million was directed to 150 Methodist and ecumenical partners in 80 countries, along with 50 projects for emergency and relief funds. The programs funded assisted with women's economic empowerment, health and HIV/AIDS, vocational training, advocacy and counseling, spiritual and leadership training and rehabilitation projects for those affected by war.

Although the economy and a decline in investment income helped contribute to a 3.7 percent reduction in giving in 2011, 47 percent of the conference UMWs exceeded their pledges, some by as much as 52 percent.

"It's really gratifying; it's humbling to see United Methodist Women continuing their commitments even as they are more aware of the need in their local areas," Olson said. "It's a great testament to their commitment and identity with the organization."