Editor's note: Each year, United Methodist Bishop Woodie W. White writes a "birthday letter" to the Rev. Martin Luther King Jr. about the progress of racial equality in the United States. Bishop White was the first chief executive of the United Methodist Commission on Religion and Race.

I began writing you on the anniversary of your birth in 1976! But until now, I have not written a letter when I've been as consumed with joy as I am today. Joy beyond description!

On the evening of April 4, 1968, when your tragic death was announced, I was at a point of total devastation. Millions joined in a community of grief. It was as though time itself had ended. Hope disappeared, and utter bewilderment took its place.

On the evening of Nov. 4, 2008, just four decades later, when it was announced that Barack Obama had been elected the 44th President of the United States - the first black American to be so elected — there was utter joy! Thousands cheered in Grant Park in Chicago, as did millions more across America. We wept unashamedly, men and women, people of all ethnicities and creeds.

Martin, it was an unforgettable moment! Even as I write, it is difficult to contain the joy or hold back the tears. You would understand.

As I watch President-elect Obama, a senator from Illinois, giving press conferences, announcing members of his Cabinet or speaking to an urgent matter facing the nation, it still seems like a dream. But it is real. America has elected a black man to what is considered by many the most influential political office in the world!

It seems only yesterday that black people were battling for the opportunity to vote. Many died seeking that right. State by state, it eventually changed. But scarcely anyone glimpsed a future when a black man would be elected president of the nation. 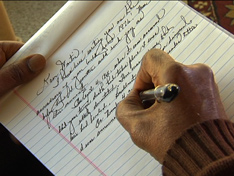 This is White's 33rd letter to the slain civil rights leader. A UMNS photo by Lisa Kelley.

Those days of marches and protests were aimed at simple but important goals: to eat at a lunch counter, to try on a garment before you purchased it, to attend a school in the neighborhood where you lived, to be hired for a job for which you were qualified, and yes, to exercise the most fundamental right of citizenship, to vote.

We sought to be accepted, and to be treated as a person and a full citizen in our own nation.

If you could see him, Martin, you would recognize that Mr. Obama is a man of unusual gifts, grace and character. He announced his intentions to seek his party's nomination on a cold January morning, in front of the state capitol in Springfield, Ill., the state he represented in the Senate.

Springfield, you will recall, was the site of two days of rioting in 1908. White mobs had burned the homes and businesses of black residents, causing thousands to flee the city. Eight people — black and white — were, tragically, killed.

That event prompted leaders to convene a meeting in New York City and resolve that a new organization was needed to address the nation's racial ills. The result was the formation of the National Association for the Advancement of Colored People.

The organization will observe the 100th anniversary of its founding in the same year the nation witnesses its first black president take office!

The election of Mr. Obama is much more significant than the transfer of power from one party to another. Its significance goes beyond the current economic crisis, in which Americans are looking to government for direction and leadership.

This election will impact an area that has been at the heart of America's failure as a nation. I believe it will bring to an end the dying ideology of "they."

American racism is grounded in an often unspoken declaration of innate inferiority and superiority. It is based on the claim that one's race is the determinative factor in ability and achievement.

But today, Americans can no longer assert that "they" are unable to hold this position or perform that role. The reality has always been that while a specific individual may or may not be able to achieve some goal, a blanket assessment on a group of persons is blatantly unfair and totally inaccurate.

Neither can it be held that the white community is monolithic in its race attitudes. The truth is, it has never been that way, even when it appeared to be so.

President-elect Obama's election is the result of the votes and support of persons of broad racial and ethnic diversity. He shattered fundraising records for a political campaign. He set records for numbers who attended his campaign rallies. He won votes in geographic areas where his political party has traditionally been defeated.

It can no longer be said that "they" won't vote, support or accept a person because of race or color. Some will or will not; but "they" is no longer descriptive or normative.

That said, it would be naïve to conclude that racism and bigotry in America are dead. They are very much alive. Racism dies hard. But its grip in the minds and hearts of Americans, Martin, is not as deep or as broad as you experienced. 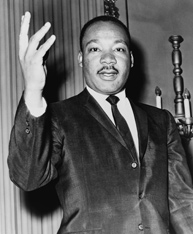 We need to still challenge every expression of injustice, bigotry and racism in individuals and institutions. Mr. Obama's election should encourage us to continue rather than end these efforts!

On a personal note, Martin, I must say a word about our buddy, Joe Lowery, who was among the first Civil Rights leaders to endorse Mr. Obama's candidacy. He often appeared to be a lone voice crying out in the wilderness. But as he campaigned for Mr. Obama across the nation, it seemed like a Moses-Joshua moment, with the Rev. Lowery, 87, urging and supporting the new leadership of Mr. Obama, 47.

Joe will offer the benediction at the swearing-in ceremonies of Mr. Obama as President of the United States of America. It will be a moving moment!

Though this letter is far longer than I expected, I have not said all that is on my heart. But I am mindful that this moment of joy and celebration was made possible by what you and so many others did and said.

In so many ways, Martin, we are a better nation, a better people than you left. Not perfect, but better. And in some ways, the nation is moving beyond The Dream!

Thank you and happy birthday, Martin.

*Retired Bishop White is bishop-in-residence at Candler School of Theology at Emory University in Atlanta.