More than 4,000 people in rural Zimbabwe now can see a little better with new glasses provided through a Nyadire Connection program.

“Everything seems brighter. I can read my Bible now,” said 110-year-old Gladis Chikoto, who lives in Chikoto Village, about 3 miles from Nyadire Mission Hospital.

Nyadire Mission is the oldest United Methodist mission in Zimbabwe. It has primary and secondary schools, a college, hospital, orphanage, farm and workshop. The Nyadire Connection, a nonprofit founded by a group of United Methodists in Pittsburgh, Pennsylvania, provides continuing support for the mission.

The eyeglasses program is led by Don Ziegler in Pittsburgh and Dr. Larry Tanyanyiwa, a doctor at Nyadire Mission Hospital. 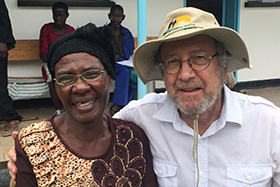 “(The men) organize and promote eyeglasses clinics where hundreds of rural people have their vision tested and receive free eyeglasses,” said Drew Harvey, chairman of The Nyadire Connection.

Ziegler said he felt called to help others with vision issues in the same way he and his wife have been helped.

“The real reward is when you put the pair of glasses on the patient and they can see clearly for the first time in their entire life. The joy they experience is what drives me to do this mission work,” Ziegler said. “Ninety percent to 95 percent of the patients we serve in the rural clinics have never had help with their vision before.”

“When she came to be served, she could see nothing on the eye chart at a distance of 20 feet (the traditional distance for measuring vision).  …  After finding her the correct pair of eyeglasses, her vision was miraculously improved.

“This is a life-changing experience for Comfort. … Now, she can go to school and learn,” he said.

Ziegler has been a part of four mission trips in the country since starting the clinics in 2016 with eyeglasses collected from churches, businesses and organizations throughout Pittsburgh. In partnership with the nonprofit Mission Vision, Ziegler learned to test vision and match patients with eyeglasses.

Mission Vision organizes and categorizes eyeglasses according to their prescription. Brother’s Brother Foundation, also a nonprofit out of Pittsburgh, transports the eyeglasses to Zimbabwe via The Nyadire Connection-sponsored ocean containers, said Harvey.

At the clinics, a team of volunteers registers patients, measures their distance vision and assesses the correction needed to improve their vision. Once an appropriate pair of glasses is selected, they do the testing again to see if the vision has improved.

The volunteers also screen for medical conditions such as cataracts, glaucoma and macular degeneration. There is a separate station for testing reading vision and dispensing reading glasses. 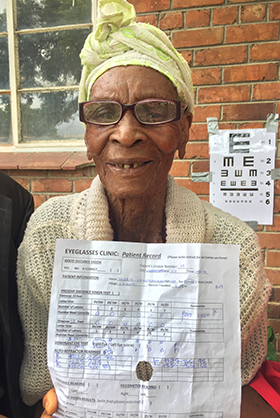 Gladis Chikoto, who is 110 years old, shows off her new glasses and test results after attending an eyeglasses clinic in rural Zimbabwe. Photo courtesy of Don Ziegler.

Ziegler also has trained local assistants and volunteers, including three nurses from the clinics, to administer testing and conduct additional clinics. Nyadire Mission Hospital continues to supervise the program.

“The local communities have benefited so much with the program since most of them cannot afford to purchase a set of spectacles due to their expensive nature in Zimbabwe, and visiting an optical practitioner in Zimbabwe also is unaffordable due to high consultation fees charged by the local specialists,” said the Rev. Lancelot Mukundu, Nyadire Mission School station chair.

He said that the eyeglasses program came at the right time, as medical checkups have become something only the elite can afford. The Nyadire program is free to all, he said, so anyone who needs a set of glasses can be tested and given a free pair that suits his or her impairment.

“The program is for all ages and caters to everyone, regardless of their religion, color, creed, race or political affiliation,” Mukundu said. “The majority of people who could neither read nor write because of visual impairments can now read and write through the efforts by The Nyadire Connection and, in particular, Don Ziegler.”

Harvey echoed those sentiments, noting the effort it takes to pull off the clinics. “Don coordinates many organizations and people required to make this work and his team works very hard to find the best fit possible for each individual patient,” he said.

The program so far has served five rural clinics: Dendera in November 2016, Nyahuku in June 2017, Chikwizo and Dindi in April 2018 and Chindenga in January 2019, with a total of 4,409 patients served, Ziegler said.

The group plans to bring glasses to the Mashambanhaka clinic in June.

“The eyeglasses project has had a huge impact in the community we serve,” said Tanyanyiwa. “We hope in the future … to offer the service daily at the hospital.”

He said it is their vision for the program to continue at the United Methodist clinics and to engage more hospitals and clinics in the future.