The Rev. László A. Khaled, district superintendent of The United Methodist Church in Hungary, said that at the start of the Russian invasion of Ukraine, about 800,000 refugees crossed through his country. Many were headed to Western Europe, so their needs were short-term.

“People left rapidly and sometimes we just received a call that they are at the border and needed beds for three, five, six people for a few days,” he said. “The Methodist Church Center was the biggest refugee center in Budapest, but local congregations were involved as well.”

Thanks to a $10,000 solidarity grant from the United Methodist Committee on Relief, Khaled said the church could act immediately to help refugees when the war started. They helped families with clothes, food and shelter, and tried to help buy medicine or help obtain official documentation, since many refugees fled Ukraine without documents or identification. 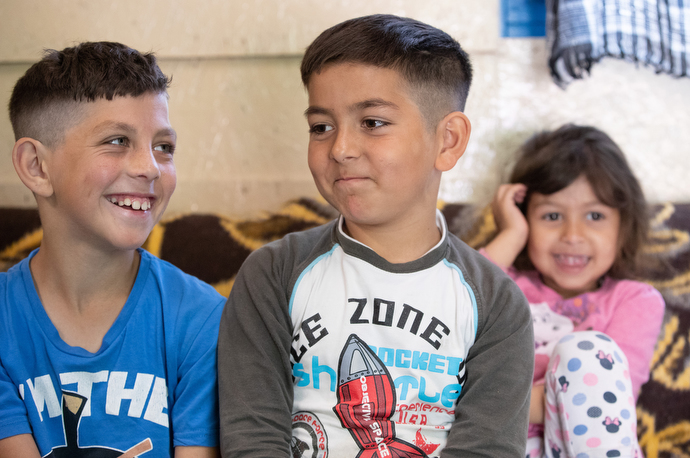 Manuel, Moses and Renatta are staying with the rest of their family at the United Methodist Dorcas church camp in Debrecen, Hungary, after fleeing the war in Ukraine. . 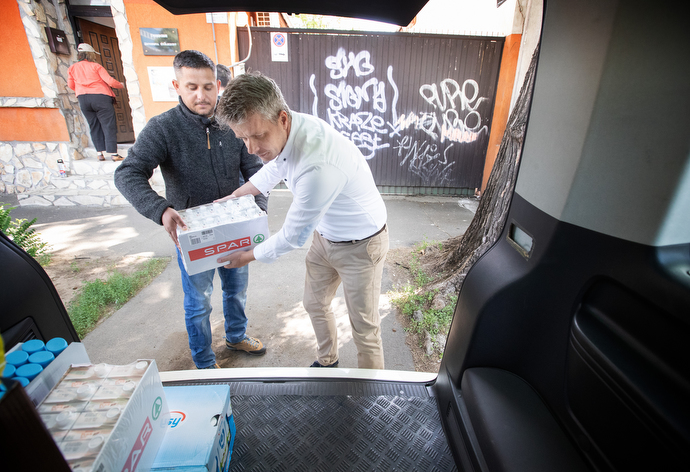 Tibor Jakusch (right) and Robert, who fled the war in Ukraine with his family, load relief supplies for other refugees that were collected at Debrecen (Hungary) United Methodist Church. Jakusch pastors a house church for some two dozen Roma families living in the Mosonmagyaróvár area.

In addition to solidarity grants for emergency assistance to arriving refugees and to cover the cost of the Hungarian church’s regular deliveries of supplies to Ukraine, UMCOR is working with partner ACT Alliance to provide 20,000 people in Hungary with essentials like hygiene items, shelter, food and psychosocial support.

The church in Hungary has helped to house hundreds of refugees fleeing the war. One of those places is Dorcas Summer Camp, where about 178 are living. The camp is run by the municipal government, but the church helps place refugees and provides support. Refugee families get three prepared meals a day, cleaning materials and clothing. House coordinators help refugees seeking documents.

Viktória Ősz-Kiss, the camp’s project coordinator, said they are a different organization, “because we don’t give just food or clothes but we also organize programs,” adding that some churches visit the camp and lead spiritual programs. They have organized kindergarten classes and in July, launched a “catch-up” educational program for the children with support from UNICEF. 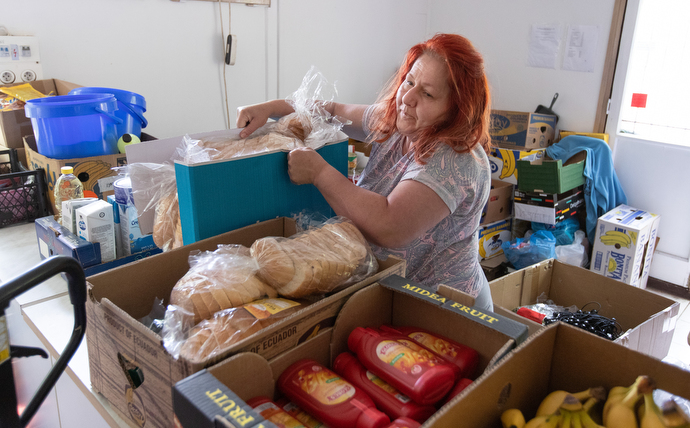 Eva, who fled the war in Ukraine, unloads donated food and sanitary supplies at the United Methodist Dorcas church camp. 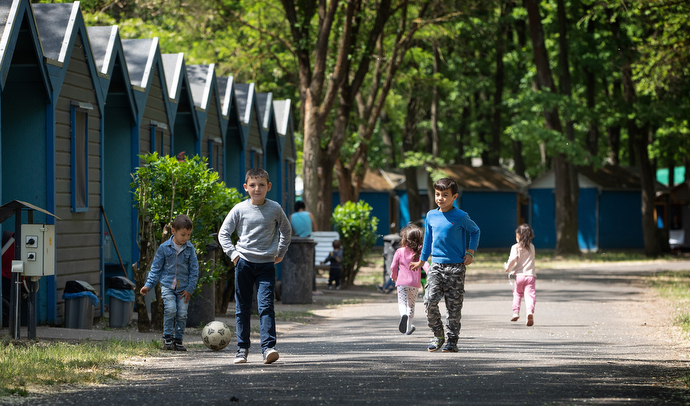 Children who fled the war in Ukraine play at the United Methodist Dorcas church camp, where their families have been given shelter.

Many of the families living at the camp are Roma, a historically marginalized ethnic minority in Europe. Transcarpathia is a region in southwestern Ukraine where much of the country’s Hungarian minority and Roma population live. Roughly 90% live below the poverty line, according to the European Union Agency for Fundamental Human Rights. Because many of the Roma children at the camp cannot read or write, Ősz-Kiss said, the catch-up program is necessary.

“The Roma population has historically been disadvantaged or even persecuted in Europe over the centuries. Actual access to services throughout the region by Roma refugees is purportedly unequal,” said the Rev. Jack Amick, director of global migration for the United Methodist Committee on Relief.

Khaled introduced UM News to Robert, a lay pastor in the Roma community in Debrecen who lives with his wife and five children in a small cottage at Dorcas Camp. 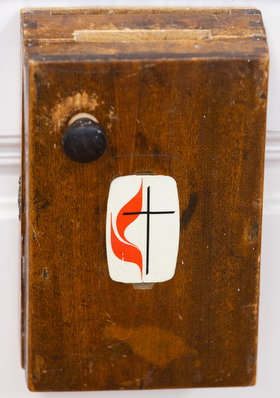 A box for offerings hangs from the sanctuary door at Nyíregyháza (Hungary) United Methodist Church.

Robert was in an accident that damaged his vocal cords and affected his ability to speak. Khaled said the church is trying to help him get an operation. Though he cannot speak, he is still able to preach: His wife, Renatta, serves as his translator.

Tibor Jakusch, who leads a United Methodist house worship group working with the Roma community in Mosonmagyaróvár, has also hosted Roma families in his home.

“A lot of Roma arrive from poor backgrounds, so for them to find jobs and create a new life is not easy. We have to help them and we ask God to follow us in spirit,” he said.

Jakusch said there is a great need in Hungary for workers, but the Roma refugees often lack the kinds of skills that the employers are seeking. However, he added, refugees from Transcarpathia can speak Hungarian, so they are received perhaps more favorably.

Helping residents find work is one of the priorities at Dorcas Camp. Ősz-Kiss said that outside companies regularly visit and offer possibilities for work. As a result, she said, 70% of the men living there now have jobs.

He said the church recently received 500 copies of a Ukrainian youth Bible. Some were passed on to refugees in Hungary and others will be brought to Ukraine along with its regular shipments of humanitarian aid. 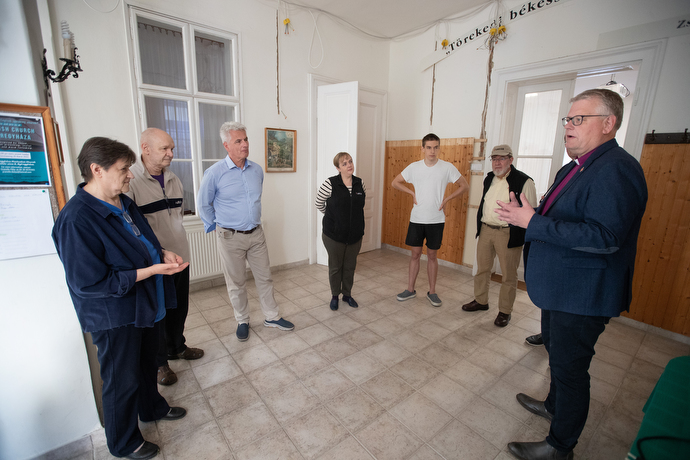 The Rev. Elizabeth Hadju (left) and Bishop Christian Alsted (right) share a time of prayer at Nyíregyháza (Hungary) United Methodist Church before a group, including representatives of the United Methodist Committee on Relief, took relief supplies gathered at the church across the border into Ukraine to help people displaced by the war with Russia. 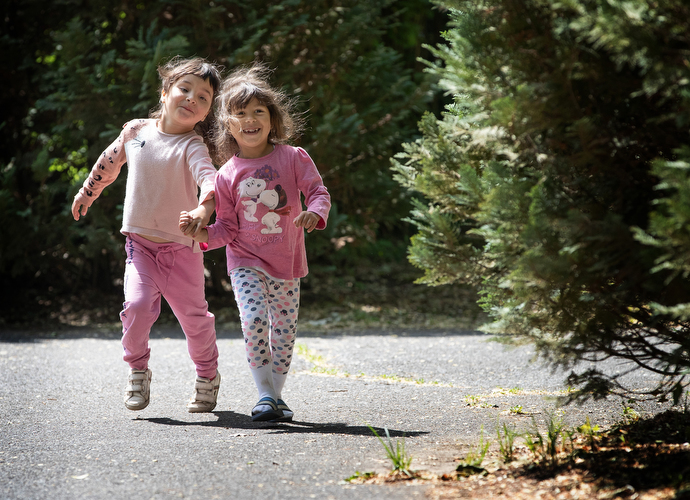 Children who fled the war in Ukraine play at the United Methodist Dorcas church camp in Debrecen, Hungary, where their families have been given shelter.

As the war drags on, Khaled said the church must think about more long-term ways to help. The church is looking to secure long-term rentals for refugee families, as well as help finding schools and jobs.

“It’s now a deeper solution; it’s resettlement,” he said. “This is the biggest challenge now.”

Butler is a multimedia producer/editor for United Methodist News. Contact him at (615) 742-5470 or [email protected] Katie Hills Uzoka, director of international disaster response for UMCOR, contributed to this report. 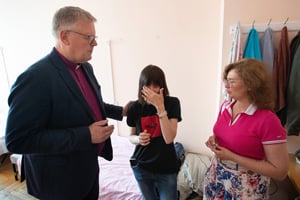