When Brandi Harvey was growing up, the preacher's kid did not mind moving from city to city every few years. A young musician who wanted to be a rock star, she just imagined she was practicing for life on the road.

"It wasn't until I was older that it began to register that most of my friends had grown up in one place for most of their lives," Harvey said. "Still I didn't like having to make new friends. When you're moving regularly, it's hard to know where you fit in and who you can trust."

Now the wife of the pastor of First United Methodist Church in Baxley, Ga., Harvey wants her three daughters to have what she did not ... a place to identify as "home."

"Despite everything I've been through as a preacher's kid and a pastor's wife," said Harvey, who is the church's music minister, "I've learned that you can look at itinerancy negatively and it can make everything miserable or you can bloom where you are planted."

While we often hear about military families moving frequently, it may surprise many that pastors and their families often pack up their belongings and change addresses as many as three or four times during their careers. 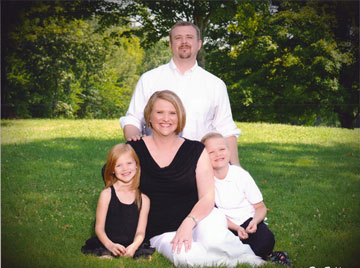 Mark Need, Pastor of Trinity United Methodist Church in Plymouth, Ind. has been on the go moving with his wife, Stephanie, and children. A web-only photo courtesy of Don Fields.

Mark Need, pastor of Trinity United Methodist Church in Plymouth, Ind., has been on the go moving with his wife, Stephanie, and children.

"We experience the same issues as anyone who moves," Need said. "We worry about all the same things. What will our new house be like? Will the kids go to a good school? Will they make good friends? Will we make friends? My wife worries more about the family aspects of the move, and I'm focused on the church. I'm looking ahead a year down the road, and she's focused on the immediate now."

He described moving as neither good nor bad.

"It depends on the situation," he said. "Moving to our current appointment has been a good experience for our family. People have invited us into friendship. The church family has been very welcoming and inviting. And there are young families so our families can do things together."

Need is encouraged that Indiana Area Bishop Michael Coyner holds workshops every spring to help pastors and spouses address their moving concerns. Coyner also wrote a book on the topic, Making a Good Move, published by Abingdon Press and available through Cokesbury.

Moving on after moving in

Susan Miller, the wife of a corporate hotel executive, started a spiritually based nonprofit - Just Moved Ministry - that does relocation workshops in churches to equip families with tools to help them embrace new lives.
Miller offers these suggestions:

"When I was first asked to do this workshop, I was not a bishop or a district superintendent," Coyner said. "I was just a pastor ... who moved to a church and didn't do it very well. I didn't think about a lot of the things I should have thought about, especially for my family. I had a great first Sunday and thought everything went really well and then we got in the car and I discovered that my wife and kids had a miserable first Sunday because I hadn't thought ahead to taking care of them. Their needs had been ignored."

Coyner said pastors often are surprised when they hear that spouses are struggling with the move. "They look at their wife or husband with blank looks that say, 'I didn't know you were worried about so and so,'" Coyner said. "So we really try to address the concerns of spouses that have been overlooked."

The No. 1 concern, said Coyner, is the needs of the children and the quality of the schools. Second, families want to know about the parsonage - its condition and when they can move in. Last, but most important, is loneliness.

'Let people minister to you'

"This is the one that always surprises the pastors," Coyner said. "They are so busy jumping right in, meeting the staff, holding committee meetings and staying busy with church work. They forget that the families are the ones transitioning from one place where they've known everybody to a new place where they feel totally alone."

Coyner believes it's important for the congregation to understand the grieving process the pastor and the family is going through and vice versa.

"Moving is an experience of grieving people meeting grieving people," he said. "The church has just lost a pastor that's meant a lot to them, and what they may forget is that there is a new pastor with a family that is coming to them who is also in the midst of grief.

"Everybody has to give each other time to get over their grief, to get used to each other and re-establish trust. It's not just about somebody getting a promotion or a new job. It's a person and a family, coming to a new place out of some sense of loss from where they've left."

Guidelines provided by some of the annual conferences:

Coyner has moved eight times in his 40 years of ministry. One of the best lessons he learned and a message he passes on in his workshop is, "Don't be afraid to let people minister to you." It comes from an experience he and his family had when one year when they moved just before Christmas.

"Just as we were unloading all the boxes, a woman came by and brought us tickets to a Christmas concert downtown that night," he remembered. "She said, 'I know you won't feel like going, but you need to take a break from unpacking. Just take your family out and have fun.' We accepted those tickets and did have a wonderful time."