“That’s what they think about us,” agreed his wife, the Rev. Anne-Marie Detjen.

Welcome to the challenges of Christian ministry in eastern Germany.

While United Methodists in the United States frequently face indifference to their faith, reactions to Christianity in this formerly Communist region can be outright hostility.

That attitude dates back before the Cold War to the Nazis. Even going back to Prussian rule, Methodist congregations faced particular challenges. The government banned Methodist and other “free churches” ─ those without government support ─ from building along major streets.

“For generations now, a lot of people in our area have not ever been in any kind of contact with the church,” Detjen said. “So they don’t know anything about the church, and what they hear from their parents and grandparents is suspicion.”

Nevertheless, Detjen and Barlow serve a church that is defying the odds. Young adults and young families are flocking to Immanuel United Methodist Church in Eberswalde, a working-class town about 65 kilometers (40 miles) east of Berlin.

The town once housed a garrison of 50,000 Soviet soldiers and rows of thriving factories. Now the soldiers are gone, and the factories mostly shuttered. The church, which is more than 110 years old, still stands.

It is a bit tricky to find. Because of those old Prussian building restrictions, the church — housed inside a renovated barn — is tucked alongside an alley with some abandoned buildings. Still, a crowd of young worshippers greeted a delegation of bishops and other United Methodists during last year’s Council of Bishops meeting.

Immanuel has more than 160 baptized and professing members, making it one of the larger United Methodist congregations in the Berlin area.

“Immanuel UMC is truly a vital congregation,” said Germany Area Bishop Rosemarie Wenner. “They learned to ask: ‘What can we offer to the community?’ And they make use of the gifts of all those who are worshippers.”

Now, the congregation — like many other United Methodist churches in Europe — is trying to use its gifts to welcome asylum-seekers from around the globe. 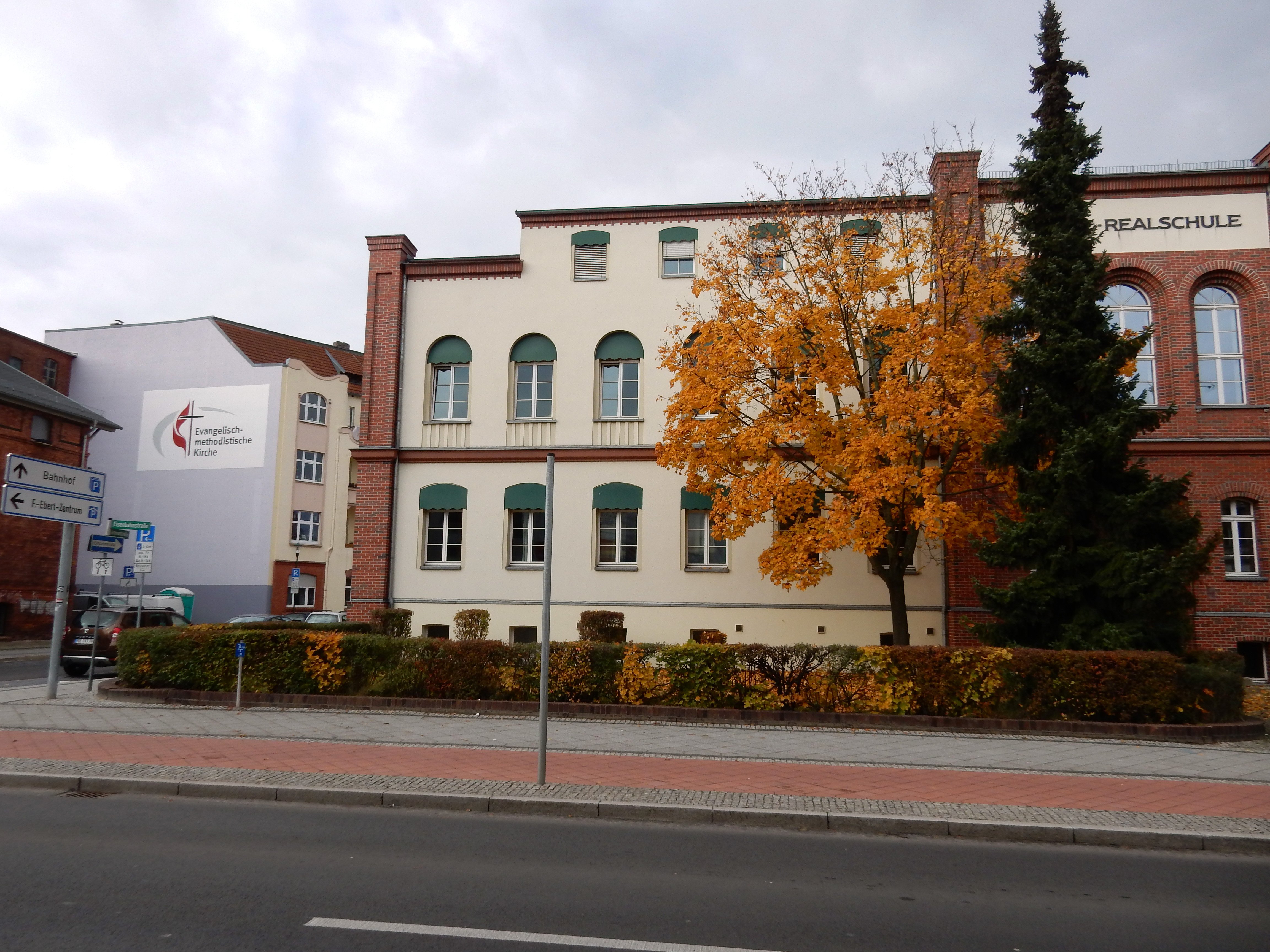 Immanuel United Methodist Church, at left, stands across the street in Eberswalde, Germany, from a former school that now serves as an emergency shelter for migrants seeking asylum. Photo by the Rev. Anne-Marie Detjen

Detjen is the church’s pastor, and Barlow — a lay minister — is Immanuel’s minister of community service. In addition to serving Immanuel, Detjen is the secretary of missional church growth for Germany’s United Methodists. Barlow is also missionary pastor of English-language ministries in Cottbus.

Why is Immanuel vital when so many congregations of varied traditions struggle? Barlow says it helps that he and his wife, both in their 30s, are the youngest church leaders in town. Detjen added that their town is also home to a university of applied sciences, which draws young people to the area.

However, a big reason for Immanuel’s vitality is the church’s welcoming attitude, the couple agreed.

This past autumn, the church learned that Eberswalde’s first emergency shelter for asylum-seekers would be in a deserted school directly across the street from Immanuel. Church members immediately got to work.

One church member organized the kitchen. Another started giving German lessons, teaching people how to shop and how to tell a doctor where it hurts.

This is temporary housing, so most asylum-seekers stay in the shelter from one day to two weeks until moving to some place more permanent.

Barlow said the shelter has a capacity of about 200, but at this point about 160 people come through every two months. So far, the guests have included Syrians, Pakistanis, Afghans, Chechens, Cameroonians and Iraqis — most escaping violence and oppression.

Church members periodically invite children staying at the shelter to join in crafts and other activities of children’s church. Barlow said at one point the church had 25 children attend from across the street.

Barlow stressed that the church’s work with asylum-seekers is not primarily about evangelism. Since the migrants are usually in town for a few days, that leaves little time for building relationships as effective evangelism usually requires.

“The primary focus is neighborly love and serving others,” Barlow said. “Of course, if someone asks, then we are more than willing to talk about our faith.”

The importance of welcoming

A few years back, Immanuel hosted a study of Bishop Robert Schnase’s “Five Practices of Fruitful Congregations.” Detjen said congregants learned they already had a knack for radical hospitality.

She recalled that on her and her husband’s first Sunday at the church, congregation members were immediately friendly and invited the couple to call them by their first names. “That is not common in Germany,” she said, where new acquaintances usually operate on a last-name basis.

University students have found ready acceptance at the church and have invited their friends. That includes a student originally from Iran, who first visited the church with his college roommate. The former Muslim was baptized at Immanuel in 2014.

“He heard about God who loves you and Jesus Christ who died for you, and that was just the thing for him,” Detjen said.

Now he plays a hand drum as part of the church’s student-led praise band. 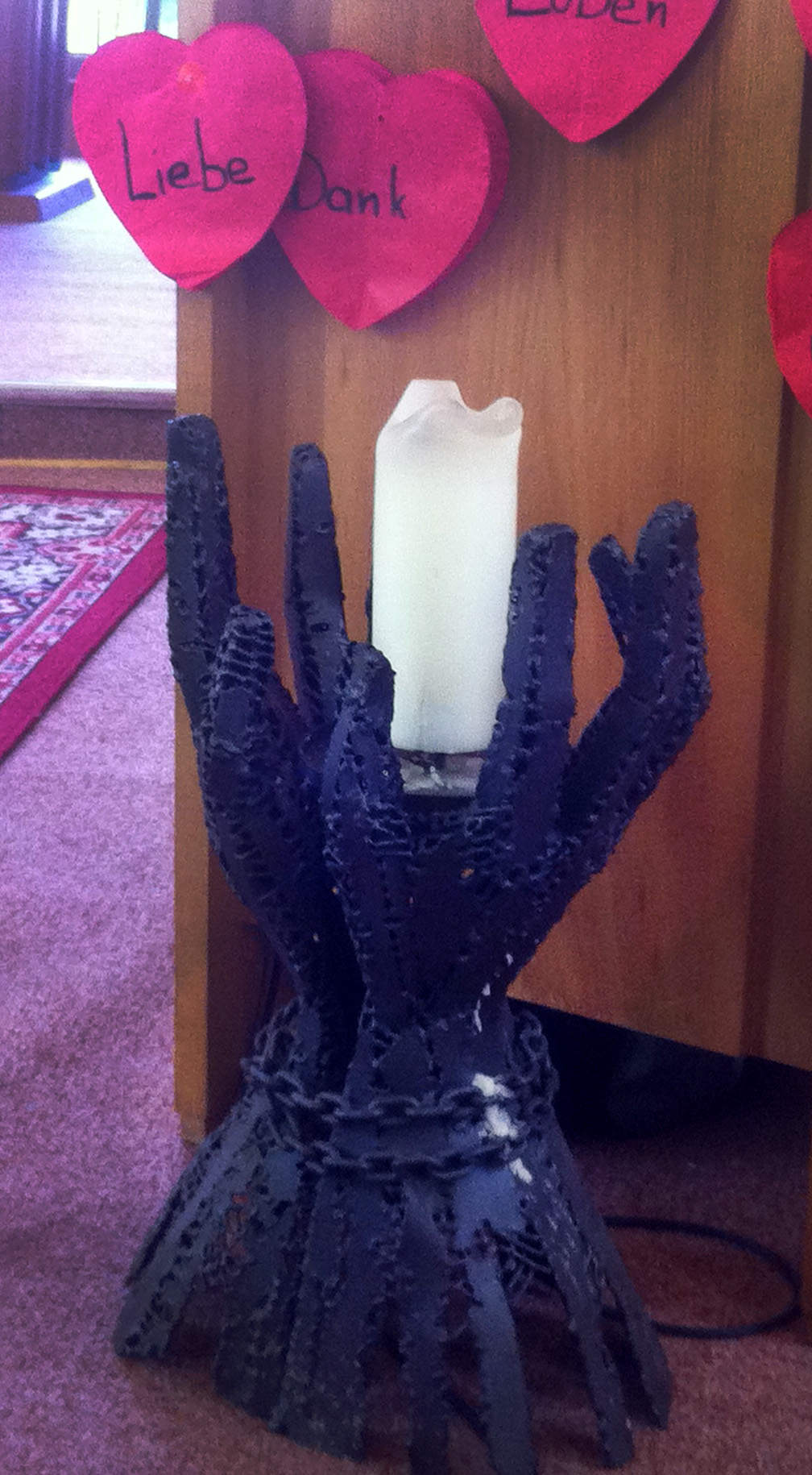 This sculpture stands in front of the pulpit at Immanuel United Methodist Church. It honors two church members imprisoned during Communist rule as well as all other people who suffer oppression. Photo by Heather Hahn, UMNS

Connections between past and present

The congregation’s warmth is all the more remarkable given that the church’s older members have good reason to be uneasy around outsiders. In the 1980s, two of the church’s youth leaders were imprisoned for a year after they criticized the Communist government. They were informed on after a church youth gathering, Detjen said.

The two former youth leaders do not attend a church anymore. But a number of members from that time remain active in the congregation. Every visitor to the church also can see a reminder of the young men’s ordeal.

In front of the pulpit stands a sculpture of two metal hands in chains holding a candle. The sculpture — the creation of an Eberswalde artist — honors the dissidents and all people facing government oppression, Detjen said.

The struggles of the past are helping some church members connect with today’s asylum-seekers, Barlow said.

That is especially true of older church members who were refugees themselves following World War II. The former school currently serving as an emergency shelter once housed German refugees in the war’s immediate aftermath.

Barlow said some volunteers also have mentioned similarities between their experiences in the former German Democratic Republic and those that compelled today’s migrants to seek escape.

The church continues to offer hospitality even as some German Catholic and Protestant churches have shifted their focus to urging more restrictions to the number of new arrivals.

Welcoming the stranger is one way the church is overcoming the suspicions that remain in the formerly Communist region.

Detjen said a Lutheran colleague recently announced, “I wish our members were like the Methodists. Those people are so devoted to their church and to serving this town in many ways.”

Even the town’s mayor, an avowed atheist, said he is eager to work with any group that is committed to helping others.

The church’s goal, Barlow said, is to “meet their needs first; then see what the Spirit does with what we are doing.”

A United Methodist pastor faces a penalty of 1,500 Euros (more than $1,700 U.S.) for “aiding and abetting unauthorized residence,” a sentence upheld in a Nov. 8 court hearing.
Local Church

Congregation changes from being a traditional church to a ministry center and opens its doors wide to those in need.
Social Concerns