One day in the spring of 2011 a baby boy was found lying beneath his dead mother in Makong Danburam, a community in Nigeria.

Danburam is in the far north and about 50 kilometers from Jalingo, the capital of Taraba State. The majority of the community is women. Many of the young females who give birth here are unable to read a book or sign their names. Most exist without adequate shelter, no health care or access to safe water. Children here usually die before they reach the age of 5.

The young woman had given birth to the baby boy under a baobab tree, which she used as her residence.

Before anyone could help her, the girl fell into a deep coma and bled to death. The child was rushed to the United Methodist Church orphanage for emergency attention.

The boy survived and is now cared for because of the work of the United Methodist orphanage, nestled by the entrance of Nigeria Annual (regional) Conference headquarters in Jalingo. 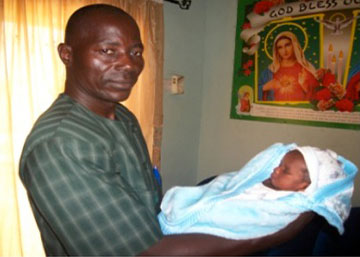 Founded in 1999 by the first elected bishop of the Nigeria Conference, the late Rev. Done Peter Dabale, the orphanage was not commissioned until 2007.

The effort brought about partnership between the Nigeria Conference and conferences in the United States, specifically California-Pacific, Iowa, Eastern Pennsylvania and Nebraska.

The partnership team between Nigeria and the Nebraska Conference was formed in 1999 because of the Council of Bishops' Hope for the Children of Africa initiative. A group from Nebraska went to Nigeria in 2000 to assess the needs of United Methodists in Nigeria.

The orphanage became the project of the Nebraska Conference. The initial goal was to raise $250,000 to build on property owned by the Nigerian Conference.

In 2005, the orphanage opened with 28 children who had lost their parents and were living with guardians who were most likely extended family members. In the fall of 2007, 20 more students arrived.

The partnership continues today, with the Nebraska Conference the primary source of funding for the orphanage in Jalingo. In addition to the costs of running the orphanage, about $2,000 a year for each child is needed to provide for the resident orphans. Sunday, May 13, 2012 - Mother's Day - is the designated day for churches across the Nebraska Conference to take a special offering for the Nigeria/Nebraska PartnershipOrphanage.

The orphanage is a place for children to learn together in classes with fun and engaging activities. The orphanage provides three square meals to its charges each day.

A temporary computer lab with an Internet connection provides the children as well as the outside community an opportunity to learn to explore the Web. Microsoft's PowerPoint and Word are a few of the programs taught.

There are eight teaching staff and 17 non-academic staff. 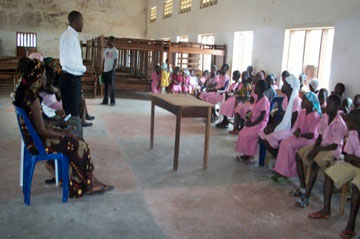 Students attend a session on reading
skills and writing comprehension.

Challenged to do more with less

This home is challenged to do more with less. In 2011, there were two newly completed and commissioned corrugated aluminum classroom blocks adjacent to the football field.

The home has male and female hostels under construction. Another computer lab is nearing conclusion.

One of the home's efforts is to help hurting children. The coordinator, Simon Benjamin, travels to villages around the state looking for children in need.

Late last year, another of the many abused young women in Makong Danburam village gave birth to a bouncing baby boy whose father the mother never knew. Two days later, she breathed her last. The child is now with a new parent in the town of Ganye.

The mission of the orphanage has expanded to include not only education, but also the material and spiritual needs of both children and staff.

When asked if there were challenges, Benjamin was quick to say yes, mentioning the lack of facilities and adequate drugs in the clinic and the lack of a qualified nurse on site.

But, as the children transition to independent living, they benefit by living for a time in a safe and caring Christian community, he said.

*Audu is director of communication and bishop's secretary for the Nigerian Episcopal Area.

Participants, ages 17 to 22, learn life skills to support themselves financially and overcome poverty and insecurity.