"Why do you cry?" I ask Nancy, a young woman who sits on a ledge, at El Faro, a small Tijuana border park. Women, present for a Posadas event, share their stories through loudspeakers by the tall fence that divides the United States and Mexico.

"Yes," she says, "I have four children, and they all are American citizens, and they are in Los Angeles."

Nancy was deported to Honduras because of a minor traffic infraction. But she couldn't stay in Honduras; she had to try to go back to her children. She dared to ride "The Beast," a freight train that immigrants "catch" to ride through Central America into Mexico and the United States, if they make it in one piece.

Nancy endured the awful trip before arriving in Tijuana. Now, she is homeless and fearing local authorities who can deport her if they find out she is not Mexican. The night before, she slept at the beach. She sits by the border fence, sobbing inconsolably, while she listens to other deported mothers speak about their ordeal.

Invited by the Rev. Saύl Montiel, a missionary with the United Methodist Board of Global Ministries, my colleagues and I, from United Methodist Communications, have traveled to Tijuana. We've come to attend Posadas at the Border, a bi-national ecumenical event that since 1993 has taken place around Christmas at the border between San Diego and Tijuana.

Every Sunday, worshippers gather on both sides of the border. On the U.S. side, whose gates open only for a few hours, the Rev. John Fanestil serves Holy Communion. A United Methodist minister, Fanistil, heads the Foundation for Change, a non-profit organization in San Diego. Both Montiel and Fanestil provide church services and break the bread together every Sunday for those who come to the fence. They pray for better circumstances and for removal of the thick double mesh that covers the designed area allowed for family meetings, yet prevents touching and embracing. They pray for justice and immigration reform.

Hundreds of men gather at El Bordo waiting for something to happen. They hope for food, handouts, maybe a job offer or news of an opportunity to cross over. As our team approaches, they rush toward our van. They think we are distributing food.

"We're hungry!" they shout. I want to hear the plight of these men, but it is difficult to talk to them as they quickly surround us. They all speak, but only a few are willing to appear on camera or talk to us. One of them, fluent in English, says he is from the United States.

"No, I can't talk to you," he says. "I don't want to appear on camera. I feel shame and embarrassment for having to live like this, to be in this condition."

It is overwhelming, and I cannot do anything for them. I can only reach out and listen. They seem to appreciate it.

Soon, a few venture toward me and start telling me their painful struggle with the locals. "It's our country, but they don't want us here," one man says. "They treat us like garbage." They fear the Mexican police. "They arrest us, take our papers, stealing the little money we receive from our families."

"It's Christmas, and we can't be over there with our children!" one shouts in English. He is angry and frustrated and doesn't want to talk. Later he tells me, "All pretend to help, but they don't. They only want to appear on TV, especially those officials and the Christians! They don't do nothing!"

Several of these men speak English. They grew up in the United States, but they don't have papers and are gradually becoming homeless.

I didn't expect to encounter helpless humanity who are losing the little dignity left in them. They are individuals of all ages and gender separated from their families by deportation. They cannot go anywhere else, but must stay in Tijuana, the nearest border point that connects them to their families. They have nowhere to go but north. It is beyond sad.

The separation is also cruel to family members left behind in the United States. Some are members of Manantial de Vida y Luz United Methodist Church in Escondido, Calif. I hear from Virginia and Rocío, two young women whose husbands were deported. The women are on their own, with two children each, and must fend for themselves. Their church, they tell me, is the only thing that sustains them spiritually and sometimes financially with help from the congregation.

But for Francisco Armeta, 18 and a recent high school graduate, life has hit hard because his mother was deported. She left behind four half brothers and sisters, for whom Armeta must care. He cannot go to college because he is busy working two jobs as a cleaning company supervisor and as a restaurant chef. He cannot enjoy sports or hang out with friends as other 18-year-olds do. He is already an adult.

Two weekends a month, he crosses the border into Mexico to visit his mother and to make sure she is doing OK. He doesn't want her to become homeless like many others, so he helps her financially.

Armeta longs to hear his mother nagging at him. He cannot hear her now, and that breaks his heart. "Kids shouldn't complain about their mothers nagging, because you don't know it until you don't have her around you," he says.

This young man is an important member of the church, says Ruben Torres, pastor of Manantial de Vida y Luz Church. He is in charge of the sound system and attends worship, despite his busy life.

Torres' heart is also broken. "We are dying, little by little, with our people," he says. "We are not bad people; the people are good people. I can't blame the United States for doing their job, but we need a reform. We need the governments in Latin America to open up jobs for their people, so they don't have to risk everything to come here."

He teaches his congregation how to give. They are collecting money at Christmas to take it to Tijuana. "We receive, and we need to give to others," Torres explains. He is grateful for First United Methodist Church of Escondido with whom they share facilities. More than 200 people gather for the Spanish Sunday services. 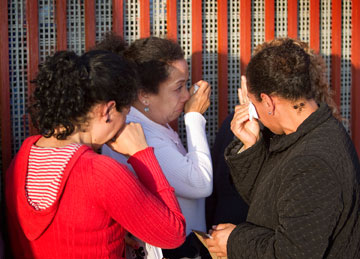 Mothers who are separated from their families in the U.S. cry at the Mexican side of the border wall between San Diego and Tijuana, Mexico, during the Posada Without Borders.

As we are about to leave the Posadas at El Faro, I ask Guillermo, our driver, "Can you do anything for Nancy?" He contacts the nuns, and they have a space for her. I am relieved.

There are not enough shelters for all of the people stranded at the border. The Catholic Church has opened shelters for women and children. The Salvation Army helps the men, if they have space. The United Methodist missionary takes health kits as often as he can. He wants to do more.

Staff photographer Mike DuBose and I go back to Friendship Park on our last day in Mexico. It's closed, and we have to walk for about a mile. The park on the U.S. side of the border is empty. We see a giant surveillance tower with security cameras. We spot one border patrol nearby. We observe the empty park. Mike takes more photos, and we walk toward the beach. Waves crash on the empty beach as a flock of seagulls bask in the sun. More patrol units rush to the beach area where we stand.

We see people on the other side of the fence, just looking over. I turn toward the Pacific Ocean, and I cry.

United Methodists alternately expressed fear and contentment with the U.S. Supreme Court decision released June 24 that holds there is no longer a federal constitutional right to an abortion.
Local Church

In this second year of the pandemic, United Methodist churches are getting creative in helping people experience Christ’s birth and love’s pure light.