Of late, North Texas Conference Bishop Mike McKee’s life has become a road show, as he hustles to meet a schedule of 11 open meetings across the conference’s four districts.

His purpose: to give briefings on and take questions about the Commission on a Way Forward and Council of Bishops’ efforts to hold the denomination together amid longstanding division over homosexuality.

“We (bishops) were all encouraged to do something, in any way we saw fit,” McKee said.

On Thursday, April 12, he held the eighth of what he’s calling district conversations, spending two hours before some 200 Metro District clergy and laity gathered at First United Methodist Church of Richardson.

Experience has taught McKee to expect the unexpected.

“One gathering I received no questions about sexuality. None,” he said. 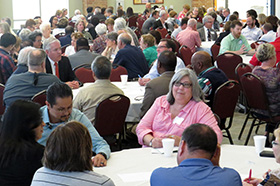 Some 200 clergy and laity of the North Texas Conference’s Metro District gathered April 12, 2018, at First United Methodist Church in Richardson, Texas, for a briefing by Bishop Mike McKee on the work of the Commission on a Way Forward. Photo by Sam Hodges, UMNS

That wouldn’t be the case in Richardson, a Dallas suburb. But McKee managed to make the evening as much a pep rally for unity in the interest of Christian mission as an info-session on the commission and council’s work.

The host pastor, for one, was grateful.

“He laid a really groundwork, helping us focus on what’s most important rather than getting into these (theological) camps,” said the Rev. J. Clayton Oliphint of First Richardson.

General Conference, the denomination’s top policymaking body, in 2016 authorized creation of the commission to help the bishops review church law regarding homosexuality and consider changes that might help the church avoid splitting.

The Council of Bishops meets April 29-May 4, and has a July 8 deadline to submit legislation to a special General Conference next February in St. Louis.

Bishops have taken strikingly different approaches to communicating about the work of the council’s work with the commission. Some have shared press releases from those groups, or written columns or blog posts. Others have hit the road.

Even there, the styles have been highly individual.

Greater Northwest Area Bishop Elaine Stanovksy has worked with facilitators in having what she calls table talks in various settings across four states, encompassing three conferences. Participants are asked to “stay curious, be kind and listen with the same amount of passion with which they want to be heard.”

Earlier this year, in the North Carolina Conference, Bishop Hope Morgan Ward held eight district forums, which began with a service of baptismal renewal, then featured table discussion and a question and answer time.

East Ohio Conference Bishop Tracy S. Malone and her staff organized a series of “Conversations on a Way Forward,” focused on four questions, including: “What is our witness and what can be our witness to the world in relation to our differences? 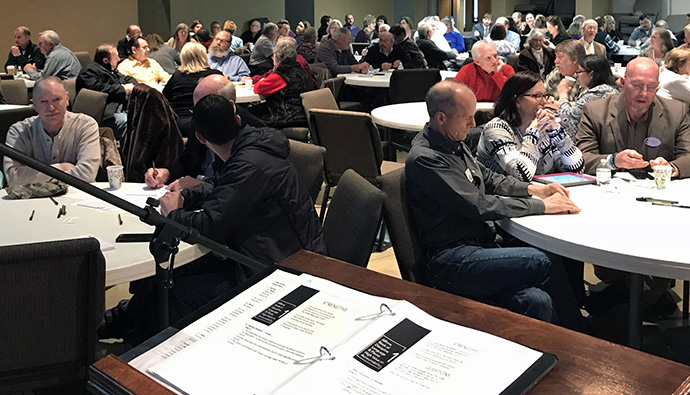 The Arkansas Conference had a series of town hall meetings to share information and gather opinions about options presented by the Commission on a Way Forward. This meeting was at First United Methodist in Jonesboro, Ark., on Jan. 14. Photo courtesy Arkansas Conference.

Participants got to weigh in on the commission’s sketches for how church law and structure might be changed to help maintain unity. Those who couldn’t attend could give their views through an online survey.

The conference has quantified and analyzed the input, posting the results online.

Of the meetings, Mueller said: “It was really positive conversation and we got people talking in very civil ways who might not have talked.”

For McKee, the goal has not been so much to gather opinions but to share what he can about options under consideration by the council and commission. And to talk up unity.

McKee was introduced in Richardson by the Rev. Camille Gaston, Metro District superintendent, who stressed the connectional ties of those present.

“Tonight we come together as a family, and families at Thanksgiving — think about it — maybe don’t all agree with one another, but we love one another,” she said.

McKee led the crowd in reading aloud Bible verses projected on a screen, as well as the Wesleyan Covenant Prayer. He then had the group, seated around tables, discuss among themselves their experiences of unity in the church, their hopes for their respective congregations and their hopes for the denomination.

Later, McKee elaborated on two options or “sketches” put forward by the commission and under consideration by the bishops.

McKee noted that numerous amendments to the church constitution would be required for this approach. He added that he would not look forward to presiding if the North Texas Conference had to decide which connectional conference to affiliate with.

“Friends, I tell you if we sell tickets to that, it will be worthy of the cost, because there will be that type of conflict,” he said.

McKee spent more time on a sketch, called the one-church model, which he said would remove from church law the statement that the practice of homosexuality is “incompatible with Christian teaching” and let churches decide whether to host same-sex weddings and conferences (through their boards of ordained ministry) whether to ordain gay clergy.

He noted that at previous district meetings he’d been asked whether a pastor would have to do same-sex weddings.

“Your pastors do not have to ever do a wedding,” he said, adding that the discretion they enjoy now on heterosexual weddings would continue if same-sex weddings are permitted.

During a break, McKee had participants submit questions on 3x5 cards. He chose a few to read aloud and answer.

One dealt with whether a church could be sued for refusing to have a same-sex wedding.

“No one has to worry about getting sued over this,” McKee said. “It won’t happen.”

Another question concerned the possibility of “exodus” from the denomination, and whether bishops have prepared for that.

“My goal is to work as diligently as I can — with your help — (to see) that no one leaves,” McKee said.

The bishop devoted much of his time to arguing for unity in the interest of mission. He described how traditional and progressive churches in the North Texas Conference had provided financial support for Christ’s Foundry United Methodist, a thriving Hispanic mission church in Dallas.

“There are 300 people worshipping there each weekend, and that’s because churches that didn’t agree with each other agreed with the mission,” he said.

Jeanie Runion, lay leader of Axe Memorial United Methodist Church in Garland, Texas, called McKee’s briefing “very enlightening” and said it encouraged her in her dream for greater LGBTQ inclusivity in the denomination.

Elijah Neypes, a layperson from Faith United Methodist Church in Richardson, also praised the session. But he said he’s concerned about “the church being changed by the world versus us changing the world.”

Though more of a traditionalist, he joins Runion in hoping The United Methodist Church can hold together.

The Rev. Thomas Frank, United Methodist polity expert, is the author of the new book “Historic Houses of Worship in Peril.”
Local Church

Can United Methodists be politically active? The Social Principles offer guidance about the interaction of church and politics.