Sara Carter and Carolyn Bond, members of St. James United Methodist Church, recalled that Johnson grew up near the church. Johnson attended St. James Methodist, which was then an African American church and was the predecessor of the current St. James. 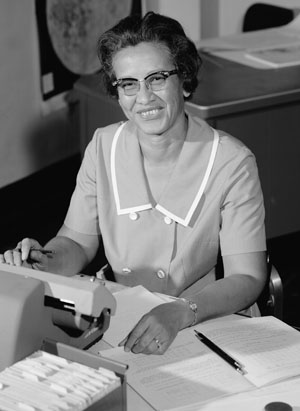 NASA research mathematician Katherine Johnson works at her desk at Langley Research Center in Hampton, Va., in 1966. Photo by NASA.

“She definitely was known for counting her steps. She knew exactly how many steps it was from her house down Church Street to St. James Methodist Church,” Bond said. In the movie, Johnson is shown counting steps in the country.

The movie depicts the important role that Johnson and two other African American women played in NASA’s Mercury Space Program. Based on the book by the same name, “Hidden Figures” is the true story of Johnson, Dorothy Vaughn and Mary Jackson.

Johnson, a physicist and mathematician, is 98. She lives in Hampton, Virginia.

Carter and Bond watched the movie at the historic Lewis Theater in Lewisburg, four days before “Hidden Figures” was nominated for multiple Academy Awards, including best picture. They were joined by the Rev. Shari Stilgenbauer, pastor of St. James and Emmanuel United Methodist churches in White Sulphur Springs, and Shari’s husband, the Rev. David Stilgenbauer, pastor of Ronceverte United Methodist Church, about 13 miles from White Sulphur Springs.

Bond said Katherine, her daughters and her second husband, Lt. Col. Jim Johnson, would attend worship at St. James when they came back to White Sulphur Springs to visit her mother.

Bond said the community was unaware of Johnson’s important role in the space program before the movie came out.

“I had no idea she did all of those things. She never said anything about working with the space program, but she did always ask us how we were doing in school,” she said.

Education was important to the Coleman family, said Carter and Bond, recalling how the Coleman family made sacrifices so that their girls could go to Charleston to complete high school. Katherine’s mother, Joylette Coleman, was a former teacher, and her father, Joshua, was a lumberman, farmer and handyman who also worked at the Greenbrier.

“Mr. Coleman worked at the Greenbrier and as a custodian at the library so that Katherine could go away to high school,” Bond said. The Greenbrier is a historic resort built near the town’s natural mineral springs. It has been in operation since 1778. 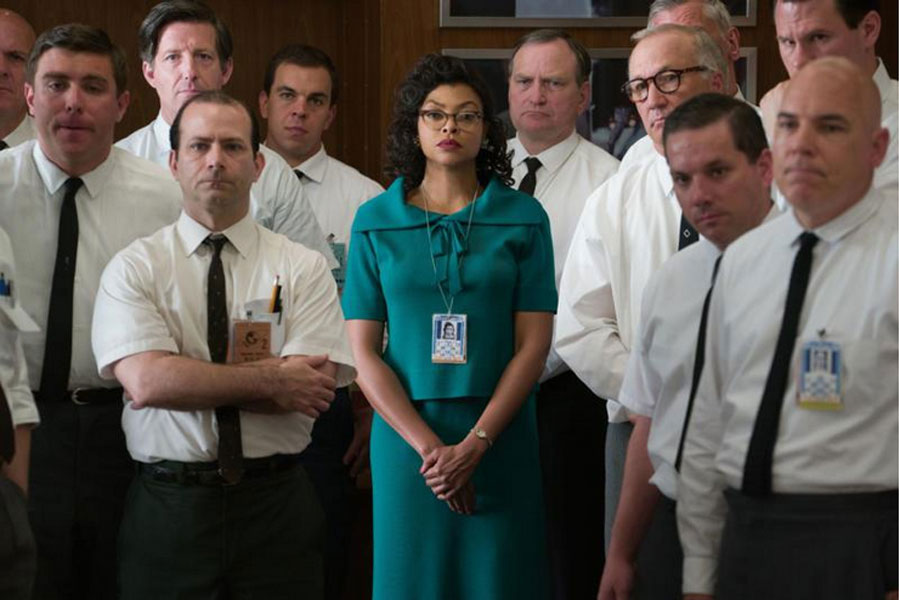 In this scene from “Hidden Figures,” Taraji P. Henson in her role as Katherine G. Johnson stands out amid her team of fellow mathematicians that helped send into orbit John Glenn. Photo by Hopper Stone.

She went on to calculate the analytic geometry for the trajectory and re-entry for Alan Shepherd’s historic flight as the first American in space and John Glenn’s orbit of earth. She also did calculations for the Apollo and Space Shuttle program.

The movie also deals with discrimination faced by Johnson and her co-workers in the 1960s, including the fact that Johnson had to run to another building to go to the restroom since the building where she worked with the mathematicians had no “colored” restroom. In the film, Al Harrison, an engineer and director of the Space Task Force who is played by Kevin Costner, takes down the Colored Ladies Restroom sign after he learns why Johnson’s breaks have taken so long. 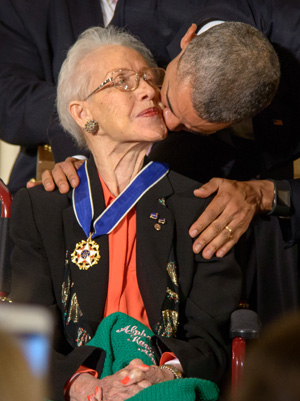 President Barack Obama kisses former NASA mathematician Katherine Johnson after presenting her with the Presidential Medal of Freedom in November 2015, during a ceremony at the White House. Photo by Bill Ingalls, NASA.

Katherine Johnson’s contributions were relatively unheralded until, at the age of 96, she was awarded the Medal of Freedom by President Obama.

Bond said the movie has resulted in Johnson’s recognition in her hometown.

“I heard that White Sulphur Springs is going to rename the public library for Katherine Johnson,” Bond said.

Carter added there are plans to put a sign on the highway.

“White Sulphur Springs has never named anything for a black person,” Carter said.

In the mid-1920s, when Katherine was a child, most African American children stopped school after eighth grade and went to work.

Bond’s father, Homer Brown, was a contemporary of Katherine’s. He went to work at the age of 11 or 12 at The Greenbrier Hotel as a page. Later, as a teenager, he switched to the night shift so that he could work toward his high school diploma. He graduated from high school when he was 23 years old and worked at the Greenbrier until he was in his 70s, Bond said.

By 1954, many communities in West Virginia were integrated, but White Sulphur Springs was still segregated.

Bond remembers protests when school integration was attempted in 1954, even though she was a young child.

“I was told by my daddy to stay away from downtown.  I remember riding my little tricycle that direction, so that I could visit a local police officer who worked on the bridge. He always had candy for the children. But I remember seeing the angry faces down that way, and I just couldn’t understand why they would be so angry,” she said.

A Sept. 19, 1954, article by Harry W. Ernest, staff writer for The Gazette, details threats against Negro children if they attended the white schools, as well as a strike by 300 of 440 white students who refused to attend school with African-Americans. Greenbrier County's Board of Education called off partial integration and ordered all students back to the schools they attended the previous year.

Carter, a generation older than Bond, worked at the Greenbrier as a parlor maid and remembers the outrageous Aunt Jemima costume they were required to wear, complete with “the big hoop earrings, red handkerchief over our hair and hoop dresses and apron. Finally, a group of us got tired of wearing the getup so we went to human resources, and we asked if we could stop.  They agreed to let us wear something more modern,” she said.

But Carter added that she had no complaints about The Greenbrier “because they gave a lot of people a job and the ability to buy a home.”

Bond went on to graduate from high school in an integrated White Sulphur Springs and on to college. She worked her entire career as a speech therapist at a local elementary school.

While the unrest over integration is now history, she said it took a toll on the community. “Our grown children all live elsewhere now,” Bond said.

“We’ve come a long way.  I’m so glad my children didn’t have to go through what we had to go through.” Bond said. “I don’t know that we ever had a restaurant we could go to — not when I was growing up in White Sulphur Springs.”

Taraji P. Henson played Katherine G. Johnson in the movie “Hidden Figures.” In this scene, Johnson makes one of many key contributions to the effort to send John Glenn into orbit. Photo by Hopper Stone.

Carter said she hopes the movie will remind people what African Americans went through.

“I’m glad they made the movie. There are ones who don’t know what we went through.  I told my daughter to go see it,” she said.

Shari Stilgenbauer said it was an honor to watch the movie with “Carolyn and Sara, two of our church members who knew her and attended church with her family.”

“The movie opened my eyes to the importance of the stories that are shared by the church and our communities,” she said.

Coble is director of communications for the West Virginia Conference of The United Methodist Church. Coble attended the movie with Bond, Carter and the pastors.