PHILADELPHIA (UMNS) - College students in Philadelphia are helping the homeless find stability and hoping to make a long-lasting difference.

The Student-Run Emergency Housing Unit of Philadelphia - SREHUP for short - began in 2011. Stephanie Sena, an adjunct professor at Villanova, developed the idea from a report she heard about a student-run shelter at Harvard. Sena now supervises three facilities in Philadelphia.

One of the housing units is located at Arch Street United Methodist Church and opened Jan. 3. The facility provides shelter for 30 men during the winter, giving them food and a warm place to stay, connecting them with resources and, ultimately, working to place them in more permanent homes.

"This is really, really key - we're not a soup kitchen," Sena said, explaining the program's format. "We're helping people through the winter have a warm place to stay and food to eat. But the second goal of SREHUP is to give students an opportunity to advocate legislatively for people experiencing homelessness."

Sena and others involved with SREHUP emphasize the need for systemic transformation.

The Rev. Robin Hynicka, pastor of Arch Street United Methodist, said the church has helped the homeless for nearly a decade.

Hynicka said collaborating with SREHUP is "just the next generation of this congregation fulfilling its mission to be a good neighbor. It's in our DNA."

Hynicka said he would encourage churches to get involved with homeless ministry, offering both immediate help and initiatives for the future.

"You can give everything you have and still not solve the problem," Hynicka said. "The problem is the systems that have caused poverty and perpetuated poverty. It's a matter of doing some significant analyses of the system. The personal, the social, the political, the spiritual - all of those play together."

'It could really happen to anyone'

SREHUP functions because of nearly 200 volunteers from five nearby universities - Drexel, Penn, Swarthmore, Temple and Villanova.

Sena said she is pleased with the student efforts so far.

"I trust the students to make the decisions and to take the reins and run with it," she said.

One such leader is Marc Witcher, student leader at the Arch Street site.

Witcher met Sena and heard about SREHUP at a volunteer fair. He was intrigued by the management role of students and by the goal of organization. He said he appreciated the effort to help people get out of homelessness, not just give temporary relief.

Serving at SREHUP has taught Witcher much about the truth of homelessness, he said.

"You realize there are so many people who could be homeless tomorrow if something randomly bad happens to them," Witcher said. "It really drives it home when you meet the people and converse with them. It could really happen to anyone."

Witcher said he thinks the student-run aspect of the shelter creates a positive atmosphere at the church. He said both the students and the guests benefit from the interaction.

"You can learn a lot from the guests," Witcher said. "They have a lot of wisdom, and sharing that wisdom lets them have a little more control in their environment. It's a healthy dynamic."

The emergency housing unit at Arch Street is open from 9 p.m. to 7 a.m. but cannot provide 24-hour care because other programs need the space, Sena explained. 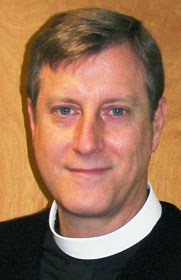 'They really walk the walk'

According to Sena, the program at the church would not be possible without the encouragement of the pastor and congregation.

"They really walk the walk," she said. "I'm happy to be partnering with them because they are really powerful leaders, and they have a lot to offer to our community."

Sena said she hopes the students who volunteer will begin to understand the diversity of those who are homeless.

"There is not one universal experience of homelessness," Sena said, explaining that the guests have varied personal histories. "For my students, they will break down what it means to be homeless and why people are homeless. They're breaking down the stereotypes because they encounter so much variety within the population."

Sena said she thinks churches have a special ability to remind people of the connectedness of everyone in a society.

"I think that churches are able to bring people together and minister to the community about our role and our responsibility to one another," Sena said.

Hynicka sees the church's work with SREHUP as a true partnership, adding that the congregation views the program "in a significantly radical sense" as a part of its ministry and mission.

"We see folks who are not in a stable living situation. Their ability to exercise the call that God might claim on their life is limited. So, we see it really as a way of creating a new and growing community of disciples, that once in a stable setting, they gain capacity to live the Golden Rule themselves," Hynicka said.