• A ministry of United Methodist Women, Bethlehem Centers offer programs to people of all ages, from child care to senior clubs.

• Located throughout the U.S., they are ministries with the poor, communities, families and all age groups.

When Steve Fleming, chief executive officer of Bethlehem Centers of Nashville, began coming to the center for immunizations at the age of 4, it was the beginning of a lifelong relationship.

Fleming’s mother sent him first to the center’s child care, then its after-school programs, then he began volunteering. His first paid opportunity came at 14.

Other than his time at college — for which Bethlehem Centers secured him a full scholarship — he’s never really left. After a year as interim director, he became the permanent director in 2014.

“The Lord aligned my stars perfectly,” he said. “I knew this would be something I wanted to do for a living.”

Fleming’s experience is not unique. It’s part of what he calls the center’s “womb-to-tomb” mission. 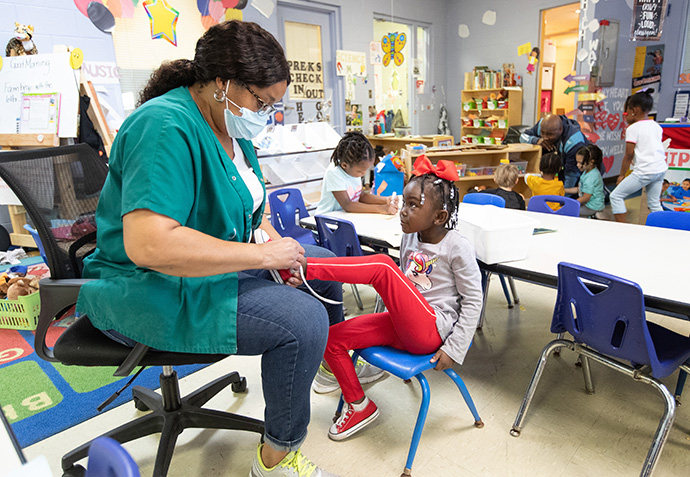 The long list of programs the center offers includes child care, after-school and teaching programs for K-10, summer vocational programs, recreation and life skills development, as well as an array of activities for seniors, community outreach projects and Meals on Wheels deliveries.

The Nashville center is celebrating its 127th year, growing out of a partnership between two women, Sallie Hill Sawyer and Estelle Haskins, who sought to impact the lives of others and provide essential services for the working poor.

At the turn of the 20th century, United Methodist Women's predecessor organizations established social service programs in response to the needs of marginalized and vulnerable communities. Many current national mission institution programs sprang out of the Settlement House Movement of the early 1900s. 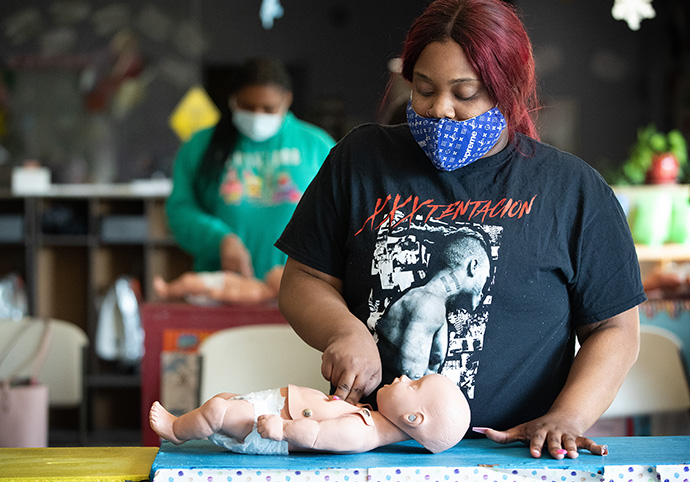 “We have a biblical mandate to serve our neighbor and take care of the least of these,” said Nita Wright, president of the Nashville and Tennessee Conference United Methodist Women and a Bethlehem Centers of Nashville board member. “It’s not a suggestion or even a request. It’s the UMW legacy.”

The North Nashville neighborhood the center serves has among the highest levels of both poverty and incarceration in the United States.

A report generated by a municipal committee considering ways to help cited the need for community resource centers and youth development among its top priorities.

Programs like Bethlehem Centers’ Vocational Success Institute aim to reach young teens at an age where they may be susceptible to making bad choices that could derail their future. 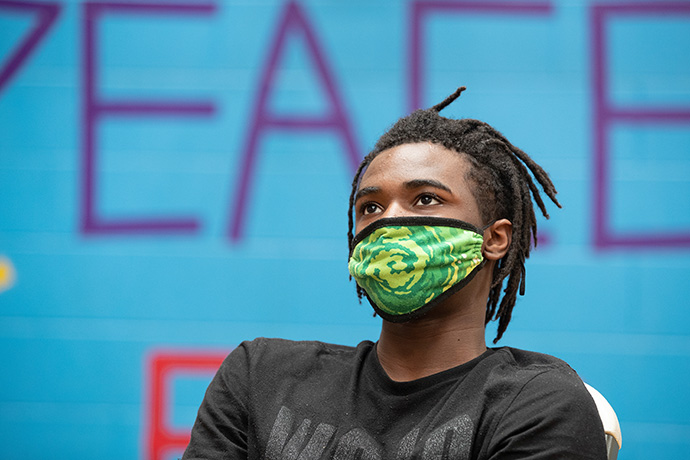 Malachi Carey is a student in the Vocational Success Institute, a summer employment program for youth at Bethlehem Centers of Nashville. Photo by Mike DuBose, UM News.

Malachi Carey, 16, joined the program at 14, working in the kitchen for Meals on Wheels, serving as a front-desk greeter and helping with children. This summer, he worked in the campus community garden.

“This place helped me a lot. I used to do bad stuff, used to steal. They helped me grow, got me working to earn my own money so I didn’t need to steal,” he said.

Carey pointed to the troubling elements in his neighborhood, like gangs and shootings, and said that the center “pulls you away from all that and teaches you to overcome it,” he said.

Fleming can relate. “I came from that neighborhood, so I know,” he said. “I saw Malachi’s journey and I’m super proud of where he is. He has so much potential.”

Carey said that in the future, he’d like to work with kids and “help them like Mr. Steve helped me.” 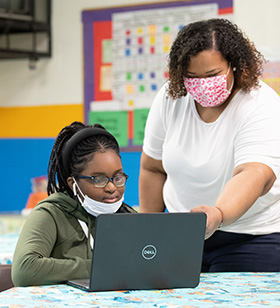 Janet Reyes is another Bethlehem Centers “alumna” who began participating in children’s programs when she was 5. Now, she’s a staff youth specialist who helps tutor kids.

“I’ve been in their shoes and I love to motivate them, see the smiles on their faces every morning and be an impact on their lives,” she said.

Wright said the staff is exceptional. “You can see the love they have for this institution and for all those who come here,” she said. “It’s special that they have had such a positive experience that they want to come back and pay it forward for others.”

The center’s Meals on Wheels program serves up to 216 meals five days a week, delivered daily with a smile courtesy of Roy Reed, who has been a delivery driver for Bethlehem Centers since 1996.

Not content to just drop off the meals, Reed stays and talks, takes out trash. He may even pick up groceries or take mail to the post office.

“Roy is the man!” said director of senior services Yolanda Thompson. “A lot of the seniors don’t have family and we can be a friendly face they see every day. When he’s not there, they miss him.”

Over the years, he’s built close relationships with those he serves. Longtime recipient Veronica Lillard has a bottled water waiting for Reed every day.

“That’s my buddy right there,” he said.

At one house, he learned that a woman’s husband had just passed away. He sat in the car and wiped away tears before heading to his next stop. 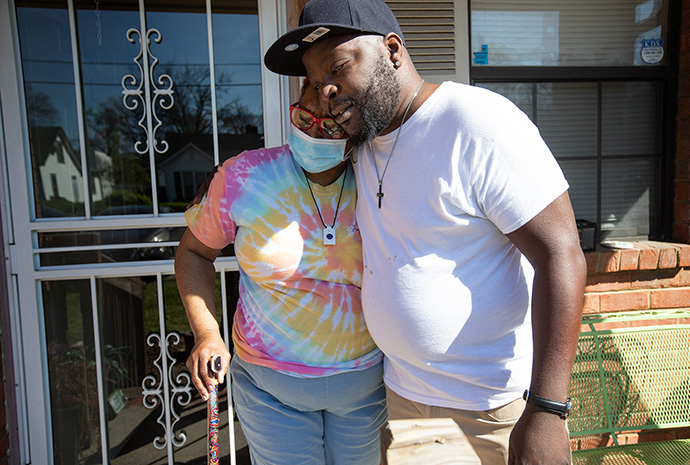 When he was in the 10th grade, Reed was part of the center’s Say Yes to Success program, which guides middle-school students in making positive life choices and developing goals for promising futures.

“The program kept my head on straight,” he said. “I grew up in a single-parent home without a father, and Mr. Steve is like a father to me.”

Perhaps no one better exhibits the “womb-to-tomb” mission than Yvonne Franklin. If not for Bethlehem Centers, she might not have been born: Her parents met there as children.

She also met her husband when he was serving as a counselor at a camp where Bethlehem Centers held summer programs. 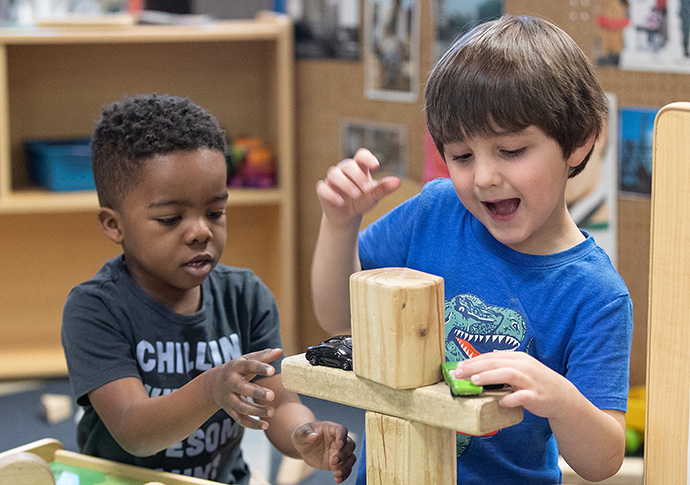 Franklin retired in 2013 and served as a caregiver for her sister. After her sister’s passing, Franklin said she was “just sitting at home all day depressed” until someone recommended Bethlehem Centers’ Silver and Gold Senior Club.

“It’s been a blessing. Bethlehem Centers was the only thing around here when I was growing up, so I found I already knew half the people here anyway,” she said.

“We’re proud to be part of a ministry connecting people to hope,” Fleming said.

It’s the sunshine of my day — I get up every morning on fire knowing I’m coming to a place where we spread love, offer hope and help.” 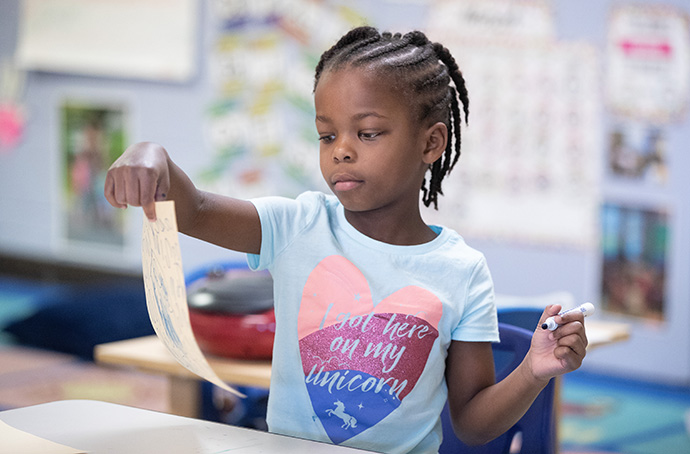 This story originally appeared in the July/August issue of response magazine, the official magazine of United Methodist Women.