Munching on doughnut holes and drinking hot coffee, furloughed federal government workers talk about tuition bills due, deadline work that isn’t getting done and how to positively fill their days when going to work isn’t an option.

That’s the scene every Monday morning at 10 a.m. at North Bethesda United Methodist Church in Bethesda, Maryland, since shortly after the shutdown began Dec. 22

The church has provided a forum for furloughed workers to talk about their frustrations as they weather the longest federal government partial shutdown in U.S. history. Bethesda is located 18 miles northwest of the District of Columbia, home to many federal government jobs.

“Monday mornings are tough for unemployed (people),” said the Rev. Jeff Jones, pastor of North Bethesda. He leads five to ten laid-off workers each week “to give them something to aim for and get out of the house and get their week started.”

About 850,000 government employees are waiting for the shutdown to end, working without pay or moonlighting to earn some cash. Congress and President Trump are stalled over the president’s demand for more than $5 billion to partially fund the construction of a border wall to separate the U.S. and Mexico.

Also affected are some smaller independent agencies, like the Equal Employment Opportunity Commission. Other workers down the economic line such as government contractors are also impacted.

While the Washington area is hardest hit, churches around the country are helping federal workers with bills, food, counseling and prayers.

“If this drags on, we’ll see more of the folks living from paycheck to paycheck," said the Rev. James E. Skillington, of Morgan Chapel United Methodist Church in Woodbine, Maryland, near Baltimore.

“You’ve got the problems of health care, you got the problem of how do you pay for gas? How are you going to pay for child care? How you going to make sure the kids are safe when they get home? What about if you have pets and you don’t have money for pet food?” 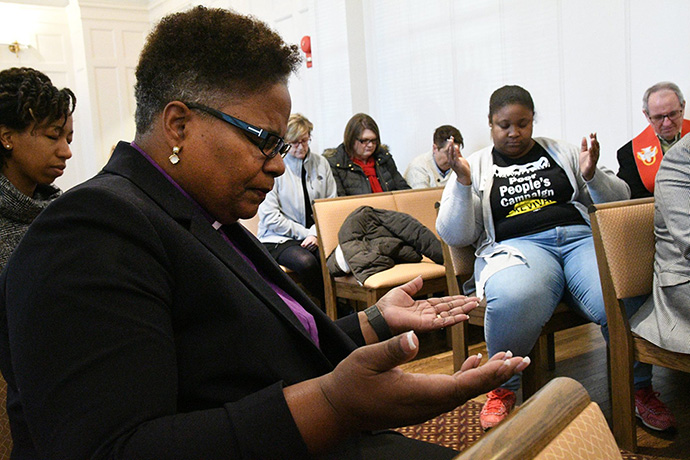 The Rev. Susan Henry-Crowe, top executive of the denomination’s Board of Church and Society, said that United Methodists “stand by all those impacted by this senseless government shutdown.” Crowe was attending a Connectional Table meeting in Atlanta during the protest.

“It is unconscionable that hundreds of thousands of employees and contractors are locked out of their jobs, working without pay and losing basic income because of political gamesmanship,” she said.

At Community United Methodist Church in South Ogden, Utah, it will take a little longer for the real economic pain to set in from the shutdown, said Claudette Rothwell, spiritual growth director. Most federal workers in her congregation were just about to miss their second paycheck.

Rothwell is particularly worried about families in the congregation where both husband and wife are federal employees.

“We have quite a few that work for IRS, because there’s a big IRS headquarters here,” she said. “We have a couple of families where mom and dad are both employed there. … There were tears last week. I know they’re worried about it and stressed about it, trying not to let on with their kids too much because they don’t want their kids to worry about it.

“That’s a hard position to be in.”

Community United Methodist Church has taken extra offerings to build up a fund to help its government workers and is contributing to a nearby food bank. Rothwell said the food bank has opened up its doors to provide food to those on furlough “as long as they have a government ID.”

In East Tennessee, Norris-Sinking Springs United Methodist Church in Norris was already feeding 250 to 300 families a month before the shutdown, said the Rev. Billy Kurtz.

Kurtz said he is especially concerned about the number of people or families who will need the assistance if federal supplemental nutrition programs lose funding and they go without food stamps.

“Along with that, we are concerned about the people who will divert funds from electric and other bills to buy food, therefore leading people to need utilities or rent assistance.”

Churches in Kansas, Maryland, Texas, Pennsylvania, Oregon, California, Minnesota and elsewhere across the country report they are setting aside funds or storing up food or both to help victims of the shutdown until the crisis ends.

In Duluth, Minnesota, a food pantry at First United Methodist Church planned for 20 percent more families seeking help because of federal workers who aren’t being paid.

Brian Kreager, a member of the steering committee for Ruby's Pantry-Coppertop, told the Duluth News Tribune that the food pantry also cut the requested donation from $20 for two large boxes of groceries to $10 for federal workers.

First United Methodist Church in Manhattan, Kansas, established a $15,000 fund, financed by its Barnabas Fund, to help people affected by the shutdown. It is meant to help with medical costs, mortgage payments and the like, according to The Mercury newspaper.

“Their electricity was about to be shut off because they only had $20 in their checking account, Scott said. “They were not members of any of our churches. They were simply members of our community who knew that our Helping Hand Fund often helps families in this rural community.”

His church was especially ready to feed anyone in the community if the shutdown stretches forward, he said.

“I got a cookin’ bunch of fools at my church,” Scott said. “They’ll fix food for everybody.” 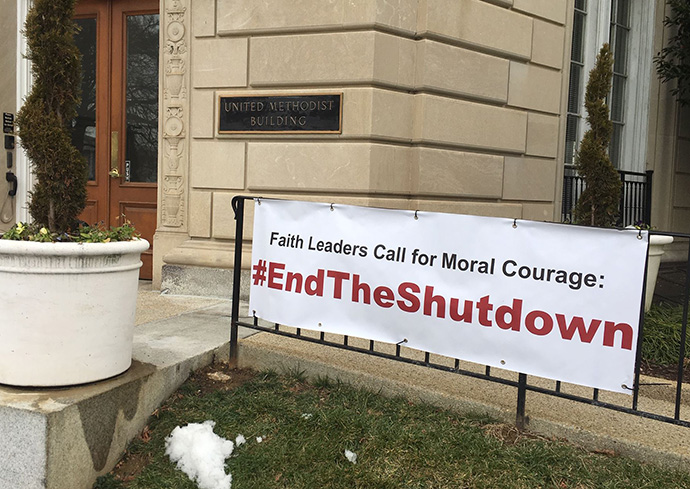 A sign calling for the end of the government shutdown is posted outside the United Methodist Building during day 2 of the shutdown. Photo by Melissa Lauber, Baltimore-Washington Conference.
Patterson is a United Methodist News Service reporter in Nashville, Tennessee. Erik Alsgaard, editor, ministry of communications at the Baltimore-Washington Conference, contributed this story. Contact Patterson at 615-742-5470 or [email protected]. To read more United Methodist news, subscribe to the free Daily or Weekly Digests.

Bishop Marcus Matthews of the Baltimore-Washington Episcopal area issued a statement today urging United Methodists to "call upon your elected officials to stand with integrity and oppose efforts by a few to threaten the common good." The bishop said that this is "not a time for finger-pointing or political one-upmanship. Rather, it is a season for strong and principled leadership based on the soundest principle of our democracy."

A group of U.S. faith leaders warned today that the impending shutdown of the U.S. government has “enormous implications,” both at home and abroad, for the poor and those trying to fill in the gaps to support them.