A United Methodist bishop from the Democratic Republic of Congo has made a heartfelt plea to the U.S. Congress to end the rapes and killings inflicted on his fellow Congolese.

Bishop Ntambo Nkulu Ntanda of the denomination's North Katanga Area was one of three witnesses who spoke during a Sept. 19 hearing of the Africa, Global Health, and Human Rights Subcommittee of the U.S. House Foreign Affairs Committee. The hearing on Capitol Hill focused on support by Rwanda for violent insurgents in eastern Congo.

Ntambo, who also serves as a member of the DRC Senate, was blunt about the situation. "Rwanda is killing our people," he told Rep. Christopher H. Smith, R-N.J., who chaired the hearing. "We want to make peace."

Hosted by the United Methodist boards of Church and Society and Global Ministries, the bishop came to the United States as part of a DRC delegation representing religious and civil society organizations. The group presented a petition for peace, dialogue and reconciliation to the U.N Security Council in New York, then called on members of Congress and the White House. 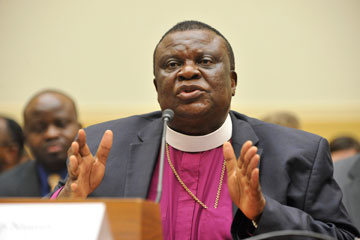 Rwanda is killing his people, Bishop Ntambo told the hearing, emphasizing that his country wants to make peace.

Ntambo referred to the delegation and the petition, which he said had at least a million signatures, in his written statement to the subcommittee.

"Our approach does not seek to harm Rwanda in any form of action but to denounce its wrongdoings reflected in its constant killings and rapes of our people," he wrote.

Conflict in the eastern DRC, along the border with Rwanda, has persisted for years, but a new crisis arose in April when a group of former soldiers defected from the Congolese army to form the M23 militia. Rwanda has denied allegations in a U.N. Group of Experts report that it has been providing weapons and recruiting fighters for M23.

Ntambo offered a stark portrait of the brutality aimed at those living in Eastern Congo, but particularly women who suffer not just systemic rape but sadistic mutilation. Human Rights Watch has documented the rapes and other atrocities committed by the M23 rebels.

These women are rejected by their husbands and families, the bishop noted, and if they become pregnant, their children are not accepted either.

"Congo has come to cry," Ntambo told the hearing. "America, you have the power. You have the strong voice."

The petition from the DRC delegation that Ntambo is a part of places the blame for the M23 movement squarely on Rwanda and its invasion of eastern Congo. The petition calls for U.N. forces there to support the DRC army "to stop once and for all the invasion of the Democratic Republic of the Congo, the systematic looting of its natural wealth and the massive rape of Congolese women."

At the hearing, Mark Schneider of the International Crisis Group called for an immediate ceasefire monitored by United Nations; an end to foreign support of armed groups, particularly Rwandan support of M23; the arrest of M23 leader Bosco Ntaganda; the full disarmament of M23 and expanded sanctions against those who continue to support the rebels.

Learn more about United Methodists in the Congo

"The support must end, once and for all," Schneider told the subcommittee.

Another witness at the hearing, Jason Stearns, is director of the Usalama Project for the Rift Valley Institute, whose researchers are investigating armed groups in the eastern Congo as part of an effort to promote solutions to the ongoing violence.

"The curse of the Congo war has been its complexity," Stearns said, making it a key challenge for politicians, journalists and advocates.

Creating a strong Congolese state "is going to take decades," he said, but in the short term, there needs to be a political process "in which the Rwandan government will take an active part."

Rwanda's progress on its own development goals cannot be separated from what is happening in eastern Congo, he pointed out. "The U.S. government needs to take a tough look at its financial and political engagement in the region."

*Bloom is a United Methodist News Service multimedia reporter based in New York. Follow her at http://twitter.com/umcscribe. Wayne Rhodes, United Methodist Board of Church and Society, contributed to this report.