When the elementary school in Maurepas, La., reopened on Sept. 6, close to 60 area children showed up for classes.

Many of the children live in homes flooded by Hurricane Isaac's torrential rains that topped the bayous and lakes surrounding this low-lying area of Louisiana a week prior.

"When the kids came to school on Thursday, a number of them had not bathed in six or seven days. Without electricity, the water pumps in their homes were not working. Fortunately, the school had showers that could be used," said the Rev. Milton Bourque, pastor of Huff's Chapel United Methodist Church in nearby Killian, La.

The school requested four cases of health kits that UMCOR trucks from the Sager Brown Depot in Baldwin, La., delivered to the Maurepas volunteer fire department. The fire station has served as a distribution center for the hard-hit area, providing cleaning buckets, health kits, tarps, shovels, water and ice.

To date, more than 6,000 cleaning buckets and 18,000 health kits have been distributed in storm-affected areas of the state.

Using the contents of the health kits, the children in Maurepas were able to shower at the school. One boy seemed overwhelmed when he received his health kit. After he showered, he asked if he could keep his washcloth and towel.

"He wanted to use the cloths to take a bath later that night. He asked if he could use the cloths again the next day. He just couldn't believe it when he was told he could take the whole kit home," said Bourque. "It was very important to this child to be given something that was his and his alone."

'God was all over the place' 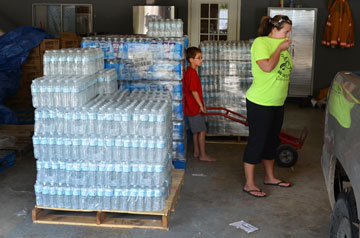 Supplies from the UMCOR Sager Brown Depot in Baldwin, La., have been distributed to storm-affected residents through the Maurepas Volunteer Fire Department.

During Huff Chapel's worship service on Sept. 9, Bourque told his congregation the touching story about the little boy. "When we collect money for health kits, or when we are assembling cleaning buckets, we don't always realize what an impact these items will have on the lives of others," said the pastor of the small, rural church that serves the Killian and Maurepas areas.

Many people will ask, "Where was God?" in this disaster, Bourque said during his sermon. "During Hurricane Isaac, God was all over the place. He was with the hands that assembled those health kits months ago, long before the items were sent out. God was with the brave volunteers who rescued people from their flooded homes. He is with us, every time we reach out to do some act of kindness in his name."

Troy Guitreau, a member of the Maurepas volunteer fire department and of Huff Chapel's board of trustees, listened as Bourque encouraged his storm-weary congregation. Guitreau assisted in the fire department's rescue efforts on Aug. 30, helping around 50 people trapped in their homes.

Guitreau, along with other area first responders, was honored after worship that Sunday at a luncheon and recognition service at a local Baptist church. In an earlier interview, Guitreau affirmed, "A lot of people in Louisiana are suffering" from the effects of flooding caused by Hurricane Isaac.

During the service at Huff's Chapel, children from the congregation passed around buckets to take a special collection.

"These dollars and coins go to help local school children with supplies and uniforms throughout the year. This offering is especially needed today, in light of the needs brought about by Isaac," said Bourque, who reminded the worshippers that "our light should be shining very brightly right now." 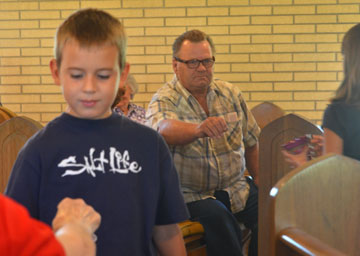 The reading for the service appropriately came from the Book of Genesis, relating the well-known story of Noah and the Great Flood.

"When Noah sent out the dove, and the dove brought back the branch in its beak, he knew that the waters were receding. The waters are now receding in Maurepas and other flooded areas. Now is when the disaster-response teams will step in to clean up and to rebuild homes. And God will be with those volunteers," said Bourque, who guided a damage assessment team from the Louisiana Annual (regional) Conference on Labor Day through some of the hardest-hit areas in South Livingston Parish.

Louisiana Bishop Cynthia Fierro Harvey led the group, which was joined by the Rev. Tom Hazelwood, assistant general secretary for U.S. disaster response for the United Methodist Committee on Relief.

In a letter to Louisiana's local churches, Harvey encouraged United Methodists to "pray for those who survived the storm as they not only rebuild their homes but (also) their lives."

United Methodists can also continue to assemble and send flood buckets to UMCOR; give to Advance #901670, specifying Hurricanes 2012, and volunteer to serve on a disaster-response team.

*Backstrom is communications director for the Louisiana Annual Conference.