Tinotenda Zamchiya was seriously ill with malaria when a friend brought the child and her mother to the Nyadire United Methodist Hospital. 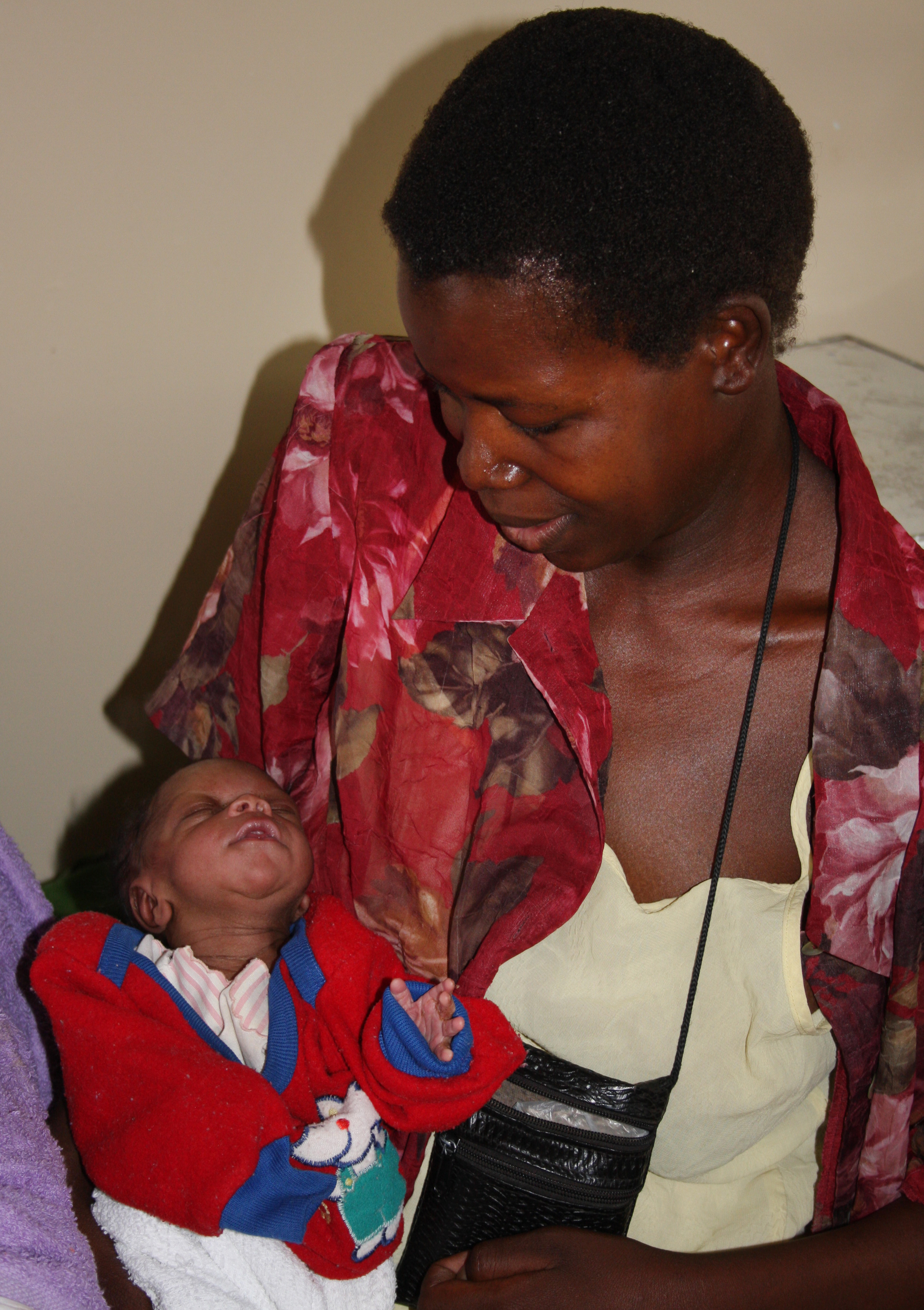 Tendai Maonanyasha, who is taking AZT because she is HIV positive, had a stroke before her baby boy was born. Both were doing well. Photo by Vicki Brown, UMNS.

“I am so grateful for the care she has received,” the Rev. Clara Zamchiya said of her daughter. That care  included the Rev. Nyaradzai Matonga, chaplain for the primary and secondary schools at the mission, going to get them.

The little girl is typical of patients treated at the hospital in northeastern rural Zimbabwe, according to Dr. Ronald Nyabereka. “Children under 5 are the most vulnerable. If you did random testing of most people in the area, many would have malaria, they just aren’t all sick,” said Nyabereka, one of the hospitals two doctors.

Malaria, tuberculosis, HIV-AIDS and related illnesses, pneumonia and meningitis are among the most common diseases treated at the 175-bed hospital, although children are often seen for diarrhea and malnutrition, Nyabereka said. The hospital serves about 150,000 patients a year, with an annual budget of between $120,000 and $130,000 – depending on income and donations.

The hospital also operates six satellite clinics that are being renovated one at a time by The Nyadire Connection, a nonprofit founded by a group of United Methodists in Pittsburgh, Pennsylvania, who provide continuing support for the entire Nyadire mission, as well as working on special projects such as the clinic renovation.

The health care is badly needed in the rural area, said the Rev. Forbes Matonga, pastor-in-charge at the Nyadire Mission. “As the pastor-in-charge, I feel honored to serve at this rural mission of our church, where every day I am faced with not only the poor, but the poor who are sick. As a team, our hands represent the healing hands of Christ.” 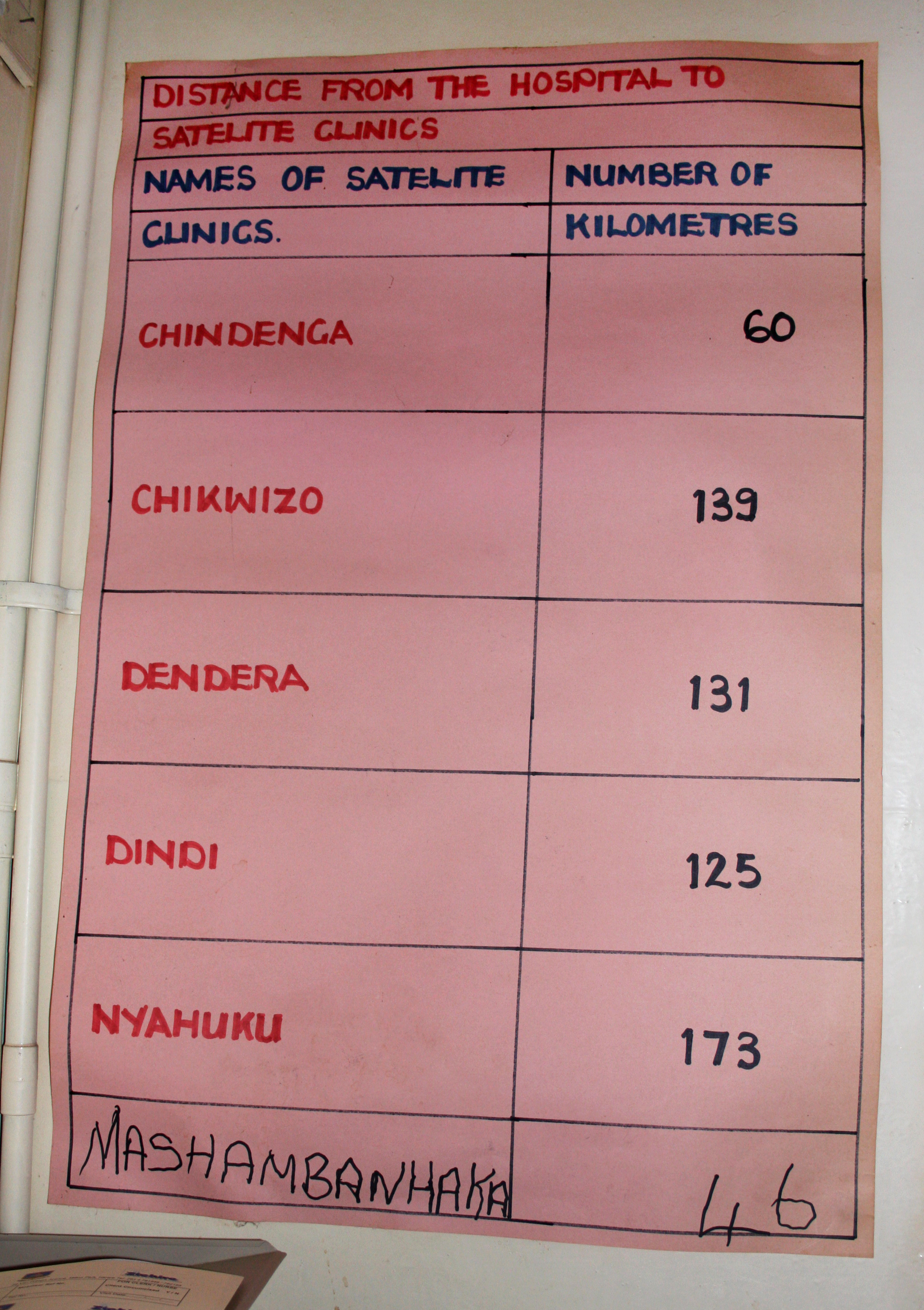 A list of clinics and the distance of each one from the hospital.

The renovation of Chikwizo Clinic, one of six satellite health clinics operated by the Nyadire United Methodist Hospital, is nearly complete and work has begun on Nyahuku Clinic.

“The health clinics are way out in the bush and woefully inadequate,” said Drew Harvey, a member of the Nyadire Connection. “When we first visited each clinic to understand what was required, there would be 150 people waiting under a tree to express to us how critically important the clinic is to their community. They had many emotional stories to tell.”

Harvey said the project escalated fundraising by the connection, since the clinic renovations will cost about $300,000 each. Funds for the two renovations came from individuals, social media campaigns, United Methodist churches in the Western Pennsylvania Conference and the conference itself. Dutilh United Methodist Church in Cranberry Township, Pennsylvania, held clinic days in September to raise money, and a fundraiser was scheduled in October.

The clinics serve between 5,000 to 8,000 people in the local community and are the primary medical care facility for people with malaria, cholera, hepatitis, and other infectious diseases. A high percentage of women deliver their babies at these clinics, which also provide pre- and post-natal counseling and immunizations for babies and children.

When the renovations began, none of the clinics had running water or flush toilets and all needed electrical service, water and more space.

The Men’s Ministry at Dutilh took on the responsibility for coordinating the rebuild of each clinic to bring it up to a minimum standard.

The two doctors on staff provide 24-7 coverage — treating illnesses as well as performing minor surgeries, including amputations and Cesarean sections. More serious surgeries are referred to other hospitals.

Sufficient water and electricity have been a continuing struggle, Nyabereka said. Electrical outages are common, meaning patients were cared for by candlelight and sometimes surgeries were finished using the light of cell phones.

But a $25,000 grant from United Methodist Women was used this summer to install a 12-panel, 5-kilowatt solar system to replace the hospital generator and ensure that electricity is available during the frequent power outages.

United Methodist Women have a long-standing relationship with Nyadire Mission. They provided a grant in 2011 that helped start the School of Midwifery. About 100 midwives graduate from the school each year with training in emergency obstetric and newborn care. Many of them are the only health care workers delivering babies in some rural communities.

A waiting mothers’ shelter allows women who might not be able to get to the hospital in time for a delivery to stay on the mission during the final weeks of pregnancy. The main room has beds for 18 women, and seven more can stay in smaller, round houses that are outside the main building.

Emily Chekeche had been at the hospital for a week after traveling from Ndowe Village to deliver her third child. “My grandmother is taking care of my children, so everything is okay. I don’t have anything to do, but I’m not bored,” Chekecke said.

Netsai Ndlovu, sister-in-charge of maternity, said pregnant women come from as far as 50 kilometers (30 miles) away to deliver in the hospital. Some come by bus, others walk, but most would have difficulty getting to a hospital if they waited until their labor began, she said.

About 60 babies are born each month at the hospital.

“I feel safer coming here. I came for my first baby and they really took care of me,” said Chipo Gamuchirai, who had just given birth to a baby boy.

Some of the mothers need special care because they are HIV positive. Tendai Maonanyasha, who is taking AZT because she is HIV positive, had a stroke before her baby boy was born, but both mother and child were recovering.

Learnmore Kateguru, the hospital administrator, said the funding comes from patients who can pay for services, as well as donations. The hospital once got government grants, but those have mostly dried up, Katgeguru said.

However, the Zimbabwe Ministry of Health did provide a $38,000 grant this year – used to install new tile floors throughout the hospital – that raised hopes more funds might be forthcoming from the ministry.

The government does pay doctors and medical staff, but Katgeguru and Nyabereka said pay is often late, and no one is getting the traditional bonuses. The United Methodist Committee on Relief supplements the salary of Dr. Larry Tanyanyiwa, the hospital’s senior physician, with a $1,250 monthly payment. The Nyadire Connection pays an additional $1,000 a month for Nyabereka’s salary. The connection also paid the final three years of Nyabereka’s medical education, said Drew Harvey, a member of the connection. In return, Nyabereka will work at Nyadire two years for each year of medical training the connection funded.

Learn more about The Nyadire Connection or donate online or by check to the connection.

Watch a video about the midwives’ training at Nyadire.

Kateguru said the budget fluctuates depending on income, so he must constantly revise priorities. While the hospital receives support from the general church through Global Ministries, the church in Zimbabwe provides no support. In fact, Katgeguru said the hospital pays an assessment of $864 a month to the Zimbabwe West Conference.

The Nyadire Connection sends about $200,000 a year to the mission, money spread over 13 programs, including the orphanage, hospital, schools, nursing school and the farm. In addition, the connection takes on projects with a beginning and an end, such as the clinic renovations – $500,000 has been raised toward the renovation of the first two clinics.

The connection was founded in 2006 after a Volunteer in Mission team of 18 United Methodists from Pittsburgh traveled to Nyadire. When they returned, the group decided support to Nyadire should be ongoing and more in depth, Harvey said.

The team hoped to develop a partnership and facilitate relationships between friends in the U.S. and Nyadire, providing support for needs expressed by Zimbabweans.

“We have two to four teams a year, and every time someone went out, they’d come back with a different idea. So the connections have grown between individuals – teacher to teacher, nurse to nurse,” Harvey said, adding that the connection is led by lay members.

Brown is news editor for United Methodist News Service. Contact her at [email protected] or 615-742-7400.