At the core of every call to action is communication.

In an effort to strengthen communication during times of crisis in the Philippines, a Disasters and Emergency Preparedness Program was held June 27-29 in Cebu.

First developed in 2013, the assessment tool aims to capture different information needs during crisis situations. While crisis response teams are able to disseminate information, they often fail to gather feedback. The RICAA tool intends to fill that gap by establishing an effective two-way communication. The data from the ground contributes to the improvement of the Community of Practice’s operations protocol and effective coordination. 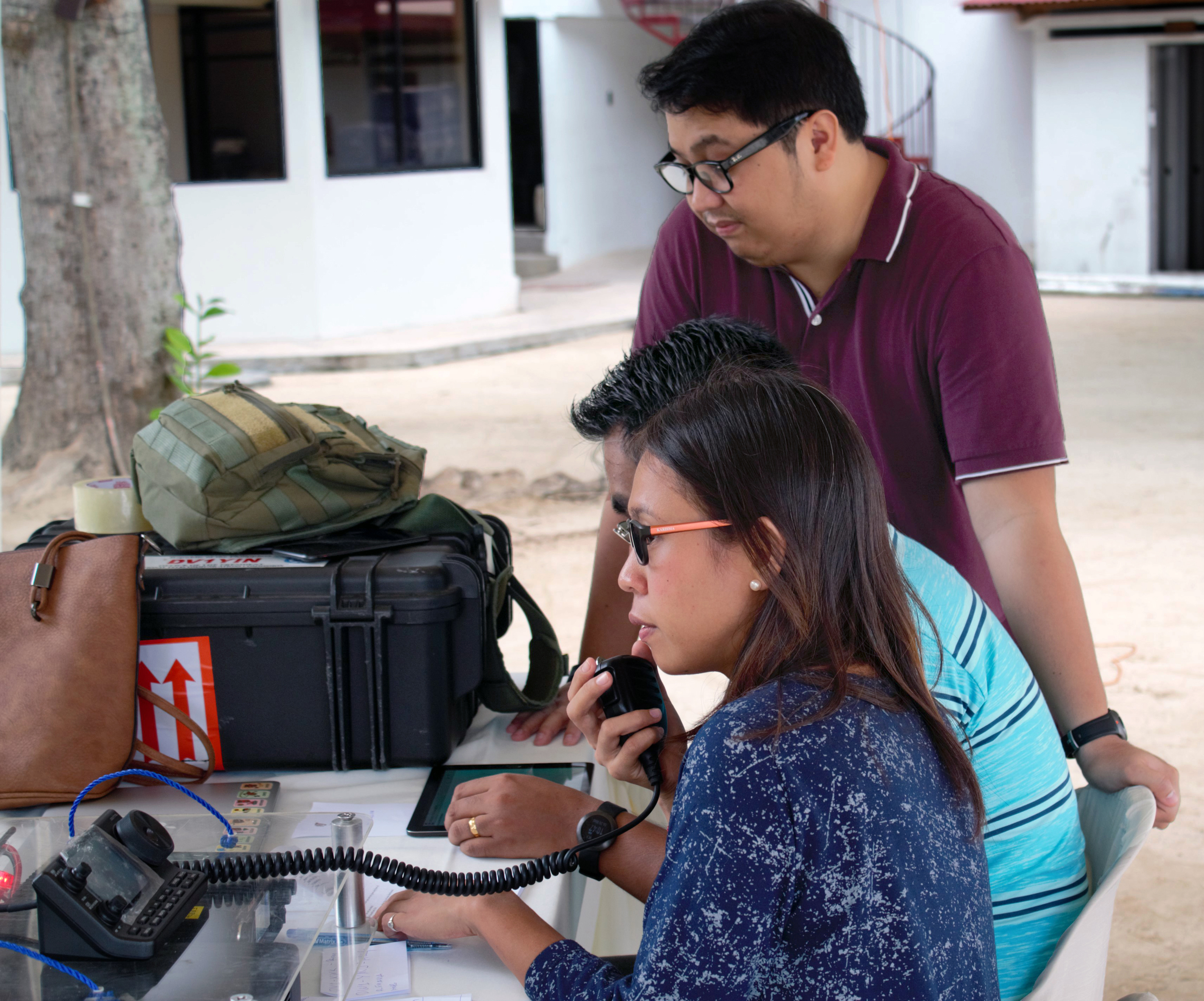 The International Organization for Migration, which hosted the workshop in partnership with the Communicating with Disaster Affected Communities Network and UK Aid, tapped the expertise of United Methodist Communications in the Philippines, a member of Community of Practice, to teach a crash course on ham radio.

April Mercado, United Methodist Communications special projects manager, led the class, discussing basic procedures and etiquette in using the equipment. She also presented various ham radio systems: the 70-centimeter ultra-high frequency; the two-meter very high frequency that reaches a 5- to 10-kilometer radius; and the 40-meter high-frequency ham radio system, which is able to connect with other hams across the Philippines and abroad.

Mercado emphasized the crucial role of ham radio in establishing immediate communication after a disaster strikes. Two-way radio communication remains the most dependable tool in times of emergency.

Ham radio has proven useful in communicating during past emergencies in the country, including Haiyan.

“The use of ham radio is in line with the common service approach of the Community of Practice on Community Engagement. One of the goals of the CoP is for each member organization to undergo the Philippine Amateur Radio Association training, learn how to use and operate ham radio, and secure a license. Ham radio is the only form of communication that we can rely on during disasters. Eventually, CoP plans to have our own frequency, so that we can have efficient communications in crisis situations,” Mercado said.

Once acquainted with the phonetic alphabet, workshop participants took turns communicating using portable handhelds, with Mercado leading the conversation, or “the net” in ham language.

Organizers conducted two simulations using the ham radio for the RICAA tool to allow participants to practice using the equipment. The evaluation that followed showed greater appreciation of the instrument, but at the same time identified important protocols that need to be established for more efficient data collection.

“The focus of CoP is community engagement. As a group, we are able to tap the resources of each member, we are able to leverage abilities and learn from each other. Within the group, UMCom is good at emergency communication, and they are able to share their expertise in improving the way we prepare and respond as a community of practice,” said International Organization for Migration project coordinator Gian Libot. 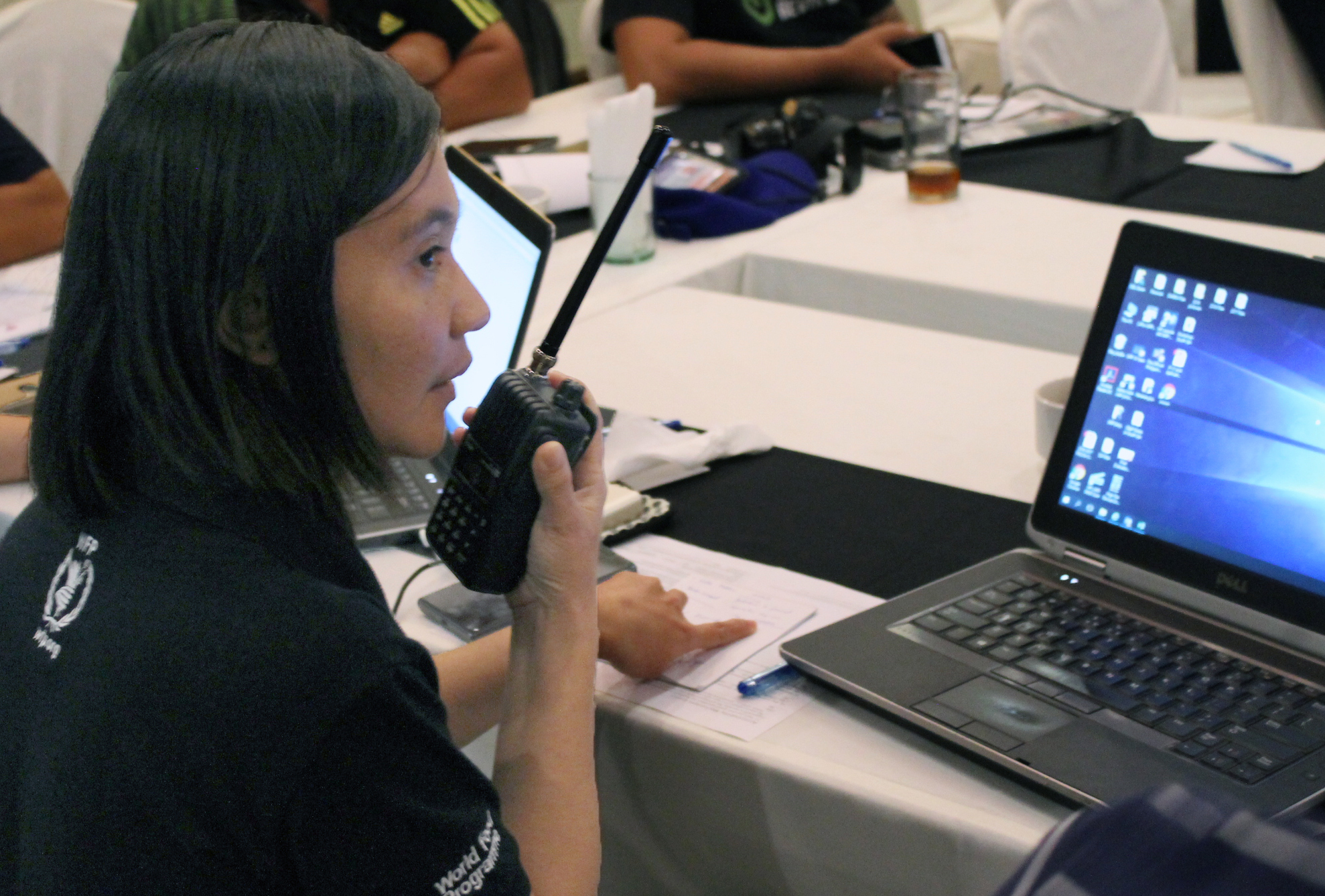 Current disaster-response systems in the Philippines primarily utilize online tools and mobile phones. However, severe weather disturbances and other catastrophes could render these networks useless, as they depend on land-based transmission systems. Unlike mobile phones, which require access to a base tower, ham radio uses radio frequencies, making it a reliable communication tool in all conditions.

“In Metro Manila, we are all preparing for the Big One, but even for other disaster scenarios, I think ham radio will be a useful communication tool,” she said.

The Philippines ranks fifth in the Global Climate Risk Index for 2017 and is one of the most disaster-prone countries in the world due to geographic circumstances.

While the country acknowledges the importance of disaster preparedness, limited resources hold back initiatives.

Based on a report by the Asian Development Bank, it is estimated that the Philippines needs an amount equivalent to 0.6 percent to 1.0 percent of its annual GDP to address disaster preparedness, such as resilient infrastructure. The government, however, is still under deficit financing, which is why the Community of Practice is introducing the use of ham radio as an alternative in developing disaster response capability.

Kristine Quidante, operations manager for drone service company SkyEye, said that while ham radio may be perceived as outdated technology, it remains the most reliable communication tool.

“Our organization has been contemplating for some time now on making arrangements in training our staff on ham radio use, and eventually have our own ham radio system,” she said.

The goal of using the ham radio during emergencies is to help build resiliency in the country by minimizing the effects of disaster, which often stifles development.

Although it was initially a challenge for the workshop participants to memorize the ham radio codes and communicate using call signs, their eagerness to learn the technology paved the way for the successful simulation.

More than 50 member organizations of the Community of Practice joined the event. While these organizations may have different mandates in terms of reaching out to communities, they are united in minimizing the economic impact of disasters.

Arce is a freelance business writer based in the Philippines. News media contact: Vicki Brown, Nashville, Tennessee, (615) 742-5470 or [email protected]. To get more United Methodist news, subscribe to the free Daily or Weekly Digests.