"January 12 is a bad day for Haitian people. We will never forget this day."

Emile Belorne, who works at the Methodist Guest House in Port-au-Prince, like millions of others in Haiti, is still coming to terms with her memories of the day a massive earthquake struck her country, killing more than 200,000 people.

"I felt it was the last day of my life," she said. "It felt like the end of the world."

The people of Haiti took three days of remembrance, Feb. 12 to 14, to mourn their losses, including family and friends as well as their homes and livelihoods.

During the three days, people dressed in white and usually spent from 6 a.m. until 1 or 2 p.m. at church singing and praying, said Kathryn J. Paik, executive with the United Methodist Committee on Relief, who has been in Haiti helping set up a field office. 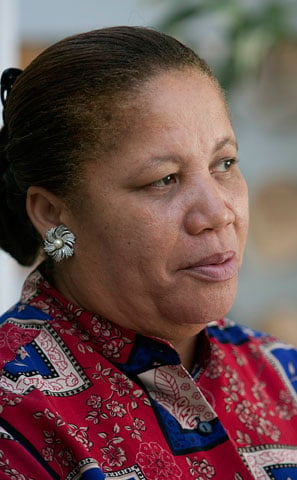 Emile Belorne says she will never forget the day the earthquake struck.

"It wasn't what I expected at all--wailing and angry toward God for allowing this to happen--but rather a time to gather their strength from God to go on still once more," Paik said. "Of course, I'm sure there are isolated cases of tension, frustration mainly toward their own government for not acting fast enough or that aid isn't getting to them quickly enough. But around where I was, streets were quiet and crowds getting in and out of churches were peaceful."

The survivors of the earthquake remember the moments leading up to the few seconds that changed everything.

Weeks after, Belorne said, she still feels the Earth move. Like all of their neighbors, she and her family are living outside. No one who felt the terrible shaking can trust buildings anymore.

"I was in my house with my husband and children. I felt the house shake with violence," Belorne said. "I cried out, 'Lord, Lord save us.' Everyone knew only Jesus could do something."

Dr. Honore Clogya, a pediatrician with Grace Hospital, was in his drugstore with his wife and mother-in-law when he felt the tremors.

The building collapsed and buried all three of them. "My wife cried out, 'God, you can take my soul,' because she thought she would die," he said. His mother-in-law did not survive.

"I feel very stressed," he said, a few weeks after the disaster. "Haitians must believe in God. They must take a breath and bless God, for everything is for his glory."

Samuel Loomery, 17, was buried in the rubble of his secondary school. "I was on the fourth floor, then I was on the first floor," he said. "Concrete fell on my feet. I couldn't move." Before his world collapsed, Loomery had hopes of being a diplomat. 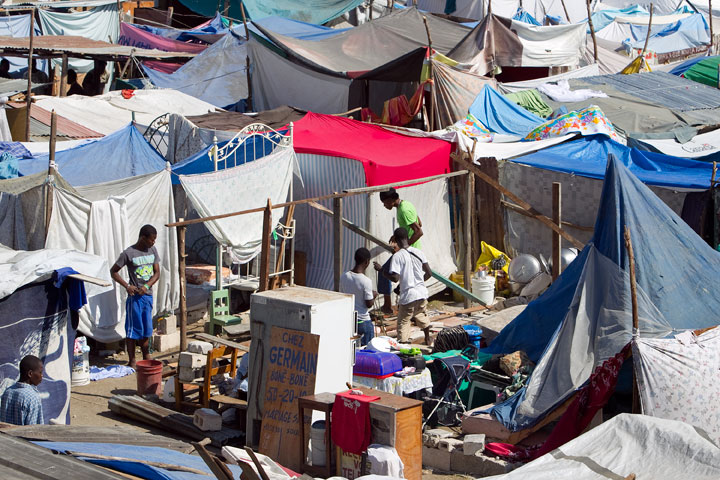 Families crowd a makeshift camp at the municipal soccer stadium in Leogane, Haiti, following the earthquake.

Val Keteline, 24, had been working as a chef in a kitchen owned by the Methodist Church of Haiti. Like many, she is now unemployed.

"Most families are sad; some people are mad. Some people are talking bad because they don't have faith. They need to talk to someone," she said.

The needs are great.

"There is no more Port-au-Prince," is how 18-year-old Jules Peterson describes life now. "Many, many people died."

But there is hope.

"Haitians are such resilient people. They pick up after themselves and life must continue," Paik said.

Gifts to support UMCOR's relief efforts in Haiti can be made online by visiting www.umcorhaiti.org. For gifts by mail, please make checks payable to UMCOR and mail to UMCOR, PO Box 9068, New York, NY 10087. Please indicateHaiti Emergency, UMCOR Advance #418325on the memo line of your check.

Amazing grace comes in many ways for storm survivors

Hurricane Laura destroyed churches, homes and businesses but failed to drown the United Methodist spirit of caring.
Mission and Ministry

Churches pick up after Sally