Jean Claude Degazon and 15 members of his family live in a cement-block, four-room house, and they couldn’t be happier.

The $10,000 home features a tiny, charcoal-burning kitchen — which is basically a small table with some pots and pans — a narrow room with a toilet, and crazy, steep, metal stairs that lead to an amazing view on the roof. If you squint, you can see the ocean and mountains in the distance. On a U.S. home-improvement television show, it would be called it a “million-dollar view.”

There are no doors. There is no electricity and no water. However, Degazon and his mother, Andrea Bonsoir, 80, couldn’t keep smiles off their faces as they proudly showed their home to visitors.

Degazon knows he has been blessed.

He is one of 17 longtime staff members of the Methodist Guest House who lost their homes in the Jan. 12, 2010, earthquake and qualified for a project created to help guesthouse staff.

Thousands of United Methodists volunteers have helped to rebuild homes, churches and schools in the more than three years since the quake, said Tom Vencuss, project coordinator for the Haiti Response Plan. The project is a three-year collaborative effort among the Eglise Methodist d’Haiti, United Methodist Volunteers in Mission and the United Methodist Committee on Relief. 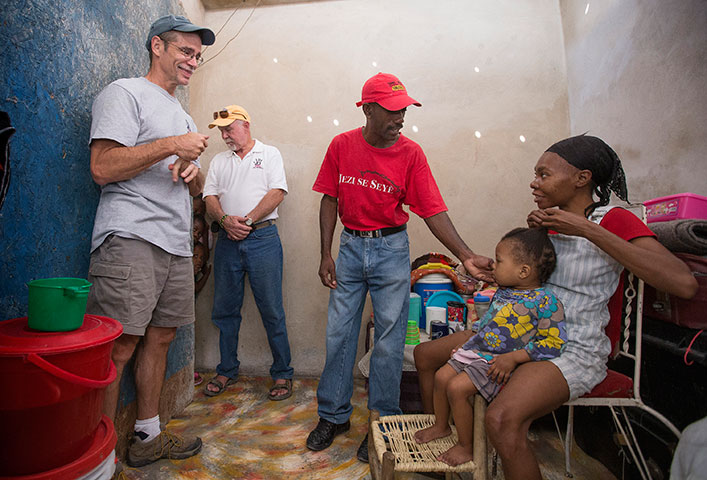 The Rev. Tom Vencuss (left) and Bill Borah visit with Jean Claude Degazon (center) in his rebuilt home. Juliet Degazon (right) and Nana, 2, are among 15 family members who live in the home.

During that time, volunteers and guesthouse staff have made lasting friendships. As they neared the end of the three-year commitment, some volunteers thought it was time to help the people who have helped them so much.

"We have staff coming in here (the guesthouse) and working hard every day without a home to go to at the end of the day," Vencuss said. "This is the church at its best; this is when we got it right."

Bill Borah, a United Methodist volunteer, took on the task of writing a proposal to UMCOR in January 2012 to find a permanent housing solution for the Methodist Guest House staff members. He also oversees the project. The Haiti Home Assistance Project is funded separately from the Haiti Response Plan.

Borah said it is the homeowner's responsibility to design and build his or her own house with $10,000. The homeowners act as their own contractors. Degazon is the first staff member to complete his house.

'I talked to God'

Degazon has a harrowing tale of survival.

He was buried in the rubble of the eye clinic in Petit-Gove. Jean Arnwine, a volunteer from Highland Park United Methodist Church in Dallas, lost her life when the clinic collapsed.

"It was very painful to us that one of the nurses died," he said. "They were here to help."

He said that when the eye clinic collapsed, he could only move one arm and hand, the one with his cell phone. He said God kept telling him "you can do something." So he stuck his hand out, and a friend pulled him free. Together, they directed rescue workers to the site to pull out other team members.

When he made his way back to Port-au-Prince, he saw his home had collapsed, but none of his family was inside at the time.

He started experiencing bad headaches and neck pain and went to a doctor for treatment. "The doctor said, 'Jean Claude, with this injury you should be dead or paralyzed.'" The doctor scheduled him for surgery.

But, once again, Degazon said, he talked to God.

"I woke up with no pain. When I went back, the doctor could not find the injury," he said. His doctor sent him to three other doctors to confirm what he was seeing.

"I lost many friends," he said. But "God is always good."