Orelien Jean Myrtinl leads his goats into the churchyard at the Methodist Church of Olivier, Haiti. UMNS photos by Mike DuBose.

The dusty churchyard slowly filled with goats led in by villagers.

The black mother goat with two kids was especially annoyed as her rambunctious offspring frolicked, played and tried to take every opportunity to drag her down for a quick drink.

Things really got out of control when Edy Alcius walked in with the big daddy goat. People scuttled about, finding places to tie their animals so they could reach leaves or grass and still be a safe distance from each other.

It was too much excitement for the human kids, too, who laughed and pulled on the ropes tied to the goats.

The people of Olivier brought their goats into the church square at the request of Gontran Delgrace, an agricultural technician who works with the Methodist Church of Haiti. A goat project, funded by the United Methodist Committee on Relief, brings much-needed income and a food source to the rural people in this small community outside of Petit-Goâve.

Goats are the gift that keeps on giving for rural families in two communities centered around the Methodist churches of Vialet and Olivier. 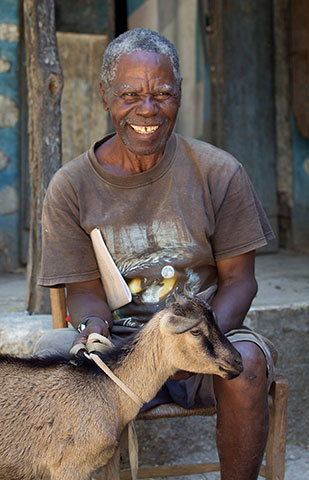 L'Auchard Fatal received a goat
from the breeding program.

Twenty families in each community received female goats bred with an "improved" male goat, with the hope of lots of kids to follow.

"Life is made better by these goats," said Orelien Jean Myrtinl, a member of Olivier. "I can buy food and send my children to school. I don't have to have a lot of land to raise a goat, and it is good cash for my family."

It is apparent that the children love the playful animals as well. Emmanuel Michaliesse, 6, took charge of his family goat when Delgrace stopped by for a visit.

The small brown-and-white goat busied herself inhaling the wheat powder her owner threw out to keep her still.

She hopes her goat will have a couple of kids soon so she can give away one and have one to sell. Maybe, eventually, one to eat as well.

Right now, this particular goat is having some problems. Michaliesse explains the goat had a kid, but it died because she could not give it milk. Delgrace speculates that some of the trees in the family's yard might not be good for the goat.

Delgrace has a degree in organic farming and animal reproduction from Universit Carabe in Haiti and the Asian Rural Institute in Nasushiobara, Japan. He teaches agriculture in the schools so children learn early how to grow their own food.

Now in this community, the future looks like a tiny brown-and-white kid, a frisky black kid and one pregnant female goat.

Donations from Switzerland Methodist Church, Wespath also help pastors and their families struggling during the coronavirus pandemic.
Mission and Ministry

Thousands of families have been displaced and United Methodist homes, schools and other buildings have been destroyed by flooding in the East Congo Episcopal Area.
Disaster Relief

Ask The UMC: How do we understand suffering from disaster?

When tragedy strikes, it is common for us to ask why. We turn to our faith for answers, but answers don’t come easily.