Gulfside Assembly, the historic United Methodist center in Waveland, Miss., is on a deliberate but not fast track as it continues to recover from Hurricane Katrina, according to the president of the board of directors.

"Gulfside Assembly is on the move - not on the fast train, but on a deliberate track," said Mollie Stewart, who is helping guide Gulfside's reconstruction. 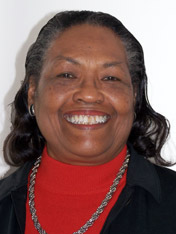 The nearly 85-year-old retreat center, built on 60 acres facing the Gulf of Mexico, was swept away when Hurricane Katrina cut a swath across the Gulf Coast in 2005.

Volunteers are urgently needed to help with the cleanup, officials said. The Federal Emergency Management Agency will pick up the trash and debris collected at the site through June, and other arrangements for debris disposal are being considered. Gulfside's board of trustees wants as much of the grounds cleared of debris as possible.

Gulfside also needs groups of volunteers to pick up bottles, cans, pieces of wood, asphalt, small stones and the kinds of things that would get in the way of the lawn mowers and other equipment, said Abraham Carey, chairman of the building and grounds committee.

"We are building on our history and heritage but looking to the future to serve the generations to come," Carey said.

"It really boils down to just kind of getting your hands in the dirt and doing what you can do," he said. No special skills are needed from volunteers. "Just come," he said. "... It is labor, but you can have a lot of fun when you come here, too."

A future with hope

After being relocated temporarily to Atlanta, the Gulfside office has returned to the assembly grounds. The staff is using a building owned by the United Methodist Committee on Relief, which set up shop there after the flood waters receded. The relief agency and the disaster response/relief team of the Mississippi Annual Conference stores equipment there, and work teams use it as a base for doing work in the surrounding areas.

The grounds also host the Mississippi Coast CARE (Community Aid Relief Effort) and Amish Relief, which do volunteer work in Waveland and other parts of the area.

"Both groups have been a tremendous help to us, but their focus is in the community and not in our institution," Carey said. 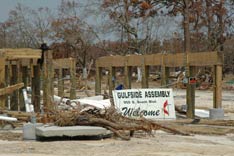 Gulfside Assembly lies in ruins in September 2005, a month after being struck by Hurricane Katrina. A UMNS file photo by the Rev. Larry Hollon.

The board, through a long-rang planning team, is considering Gulfside's needs and ministry for the future. A consultant is helping the members in a discernment process on what Gulfside will look like, what its ministries will be and what the timeline will be.

"We feel as a board that we are doing the right things that will make Gulfside stronger in the future," Stewart said. "We are on target with God and seeking his guidance as we move into the future with greater hope than ever before. &ellipsis (We) will not be restricted by what was."

While no formal fundraising is under way, people are donating to a fund called "The Gulfside Recovery Fund," and a full campaign is being planned, Stewart said.

Gulfside was a much-revered facility, and many of today's prominent African-American United Methodist church leaders trace their spiritual roots back to the assembly. It provided a boarding school for boys from rural areas, a day care facility for community children and a theological training center for African Americans from Texas, Louisiana, Alabama and other parts of the once-segregated South.

Founded in 1923 by Bishop Robert E. Jones, the first African-American Methodist bishop, it was the only place where blacks and their friends could meet for spiritual, educational and recreational activities of that era.

"I think one of the reasons we haven't gotten the help that we need is that when people see the devastation, they're overwhelmed," Carey said. "But you look at some of the photos with the bricks piled up from the buildings that people once knew as thriving residences, they're just overwhelmed ... and wondering, 'What can I do in the midst of all that devastation?'"

The devastation includes boats that washed up from other places, car seats for babies, destroyed vehicles and donations from across the church reduced to rubble. "Whatever, you can almost find it here," Carey said. "We even found a sign that came from New Orleans on the property (as well as) iron pipes, plastic, and just about any kind of debris that you would find on a dump."

Gulfside leaders applaud the church for its support in the past and encourage continued support for the future. Stewart affirms "the connectional system and all that means to us as a church" because annual conferences such as Texas, Louisiana, Mississippi, Missouri and the Southeastern Jurisdiction included Gulfside in their 2007 budgets.

"As a fellow United Methodist, this means a lot to me personally as I travel across this jurisdiction and beyond, encouraging and informing (the) church on the importance of paying conference apportionments," Stewart said.

Those interested in volunteering at Gulfside can contact Wilma Dunbar, the assembly's business manager, at [email protected]