Blustery talk from North Korea about missile attacks on Guam is not new, says a United Methodist pastor there who recalls similar pronouncements made in 2013 by the then newly installed Supreme Leader Kim Jong Un.

Many on the island remained “unfazed” even after Guam became the center of the threatened nuclear showdown last week between North Korea and the U.S., said the Rev. Johann M. Osias, senior pastor of Guam United Methodist Church in Mangilao, in an email to United Methodist News Service.

But during the Guam church’s Sunday service on Aug. 13, the pastoral prayer sought “wisdom and restraint on the part of all those with the instruments of such deadly force in their hands,” acknowledging “a greater danger and greater threat” when a war of words replaces other efforts “to reduce tensions and promote dialogue and negotiations.”

The denomination’s California-Pacific Conference, which includes Guam and many Korean-American churches, is particularly affected by the mounting tensions between North Korea and the U.S.

There are fears for Guam as well as relatives in both the North and South of Korea, Bishop Grant Hagiya said in an Aug. 14 statement posted on the conference website. “The seeming rhetoric and immaturity of both leaders threatening pre-emptive nuclear strikes, and ‘fire and fury,’ is unacceptable in today’s age,” Hagiya wrote. 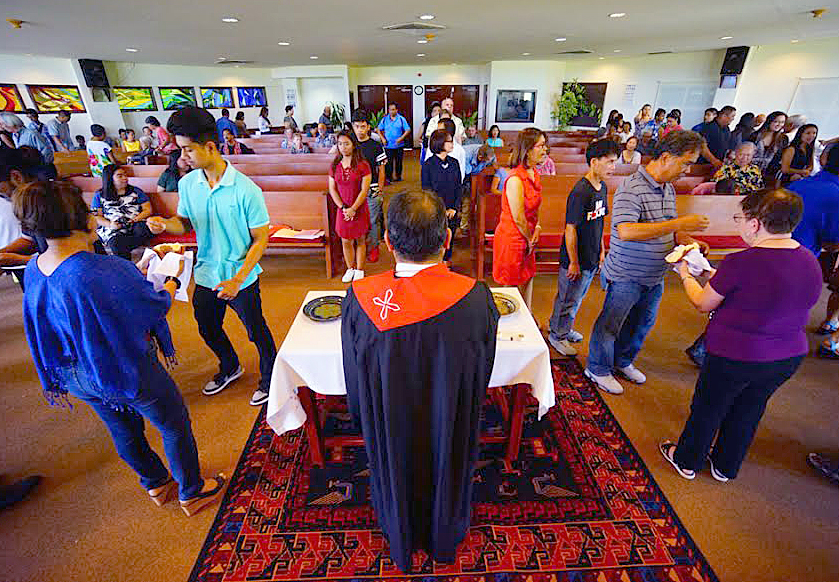 Members of Guam United Methodist Church partake in communion on Pentecost Sunday, June 4. Guam is a U.S. territory in the Pacific that has been threatened with a nuclear missile strike by the leader of North Korea, Kim Jong Un. The Rev. Johann M. Osias, senior pastor, said a similar threat was made in 2013. Photo courtesy of Hiro Kurashina.

The escalation appeared to ease slightly on Aug. 15 when North Korea state media said that Kim Jong Un had reviewed his military's plans but decided not to fire missiles at this time.

Osias noted that Guam has no known shelters adequate for nuclear attacks, “except perhaps in the military bases.” The general public was advised to use their concrete homes, equipped with typhoon shutters, as shelters and “were given some useful safety instructional materials” on preparing for possible nuclear fallout.

With 162,000 residents, the U.S. territory of Guam is home to two large U.S. military bases — Andersen Air Force and the Naval Station — and more than 6,000 U.S. military personnel.

Osias, formerly of the Philippines Annual Conference, has served at the Guam church since 2011. He transferred his clergy membership to the California-Pacific Conference in June 2015.

Founded on Easter Sunday in 1971 and chartered as Guam United Methodist Church 10 years later, the congregation’s current diverse membership of 189 includes Filipinos, local Chamorro indigenous to the island, white and African-Americans, Russians and other Asian-Americans, the pastor said.

Sunday attendance ranges from 90 to 115. Several other congregations — Guam Korean-American United Methodist Church; the Chu’ukese Wolip Church, an evangelical congregation, and the Kosraean Congregational Church of Guam — also share the facilities, so up to 400 people may be worshiping in the building on any given Sunday.

Despite the rising nuclear tensions, “many locals and tourists preferred to head to the beach rather than church,” Osias noted.

As usual, members of Guam United Methodist Church gathered for their usual “singspiration” and greetings before the Aug. 13 worship service. “(The) mood was calm and one can really feel the confidence that things are all right, and not even a sign of fear and anxiety, though mentions of the attack (could) be overheard from the conversations,” the pastor said.

“We focused on lectionary readings and on the Gospel of Matthew, 14:22-33 in particular. I shared my personal reflection on Peter’s experience of chaos, fear and doubt,” he added.

“I know from personal experience that I do have a tougher time seeing Jesus when chaos closes in and things aren’t going so hot,” Osias said. “Like Peter and the others, I am too easily consumed by my own fears and insecurities.”

But there are no uncertainties about whether Jesus will respond to a cry for salvation, he pointed out.

The next day, United Methodists joined others at a prayer vigil at St. John Episcopal Church, in Upper Tumon, arranged by the Guam Interfaith Committee. The event focused both on the threat to Guam and the aftermath of the violence at a rally of white supremacists in Charlottesville, Virginia.

The service was attended by representatives from Buddhist, Hindu, Islam, Jewish, Baha’i, Chamorro Spiritualism and Christian faith. “I was given the task to pray on behalf of the Christians, while the visiting bishop of the Episcopal Diocese of Hawaii and Micronesia, the Right Rev. Robert L. Fitzpatrick, gave a short but very encouraging message,” Osias said.

Independent Guahan and Prutehi Litekyan, two community groups opposed to the presence of the U.S. military in Guam, also organized a “People for Peace” rally in Hagatna, Osias reported. The rally organizers said in a statement that “Guam has been forced in the middle of other nations’ conflicts, particularly as an unincorporated territory of the U.S.”