People have been growing food along the Santa Cruz River for thousands of years.

Flowing north from Sonora, Mexico, to Arizona, the Santa Cruz always has been an important part of desert and riparian life in this region of little rainfall. Because of the growth of the cities in southern Arizona and the overpumping of groundwater, the Santa Cruz now flows only after rainstorms. Even though the river is dry, the tradition of farming along the banks of the Santa Cruz is maintained.

Just south of 29th Street in Tucson, Ariz., is a community farm managed by the Community Food Bank and City High School. Known as "the Urban Farm," Las Milpitas de Cottonwood began in March 2011 on about seven acres stretched along the floodplain of the Santa Cruz. After a series of open community visioning meetings and site designs, our group of seven high school and college youth spent the summer working on the foundations of this community farm.

Summers in Tucson are harsh, especially the 110-degree days before the arrival of the monsoon rains. 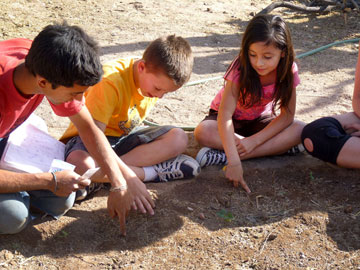 During the summer, Youth Farm Project interns began digging sunken garden plots for community members to grow vegetables. Each bed required digging down two feet and filling with a mixture of the native soil and compost made from donated horse manure. The rest of the soil was taken by wheelbarrow around the farm to where it could be formed into swales, berms and raised pathways designed to direct and capture rainwater for the shade-giving mesquite trees, walls of prickly-pear cactus and the native crops that thrive from the rain that slowly infiltrates the soil.

Working at the farm is labor intensive, but we persisted through the summer.

In late fall, the visible impact of our work was our motivation: 50 plots with families growing vegetables, fun community events, gardening workshops, and community and youth groups volunteering regularly.

Why did we do it when there was not much more than bare soil and some desert plants? For three reasons:

Mexican-American families from the surrounding neighborhoods, Bhutanese refugees and community groups have adopted milpitas at the farm, increasing their access to organically grown and nourishing foods.

A few families started planting at the farm after their children began growing a garden a few miles downstream on the Santa Cruz at Davis Bilingual Elementary. 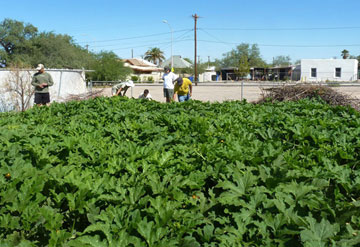 In January, when we started interning at the public elementary school, the garden did not have much more than weeds and a couple of garden beds. Since bilingual education was almost eradicated in Arizona, Davis has been one of the few schools to hold on to its strong bilingual program.

Sitting at the south end of Barrio Anita is an old-time barrio, which, after various urban "renewal" (removal) projects, has been isolated to the west by the freeway, to the east by the railroad tracks and Main Street, and by the major roads of Speedway to the north and St. Mary's to the south. Davis stands out as a symbol of the resilient Chicano culture in southern Arizona, and long ago, made social justice one of its major focuses.

It was not surprising when parents and teachers expressed interest last fall in revitalizing the school garden across the street, a garden started in 1994 as a dedication to a student who died on a trip back to Mexico. It was not long before the land grew into a thriving school and community garden. The excitement of the students and the dedication of the parents were louder than the endless train whistles and car noises that surround the garden.

In less than a year, El jardíncomunitario de Davis has grown to include five classroom keyhole sunken garden beds; four long sunken garden beds where pumpkins grew during the summer and now where wheat is growing; a herb and medicinal garden featuring traditional Mexican herbs like epazote, yerba buena, ruda and cilantro; a native flower garden, an outdoor adobe classroom area under the shade of a mesquite; heirloom fruit trees, a chicken coop, and a native tree and bush perimeter to create a natural barrier from the street and tracks.

As the garden has been built, a strong sense of community has developed around it. More than 70 students, parents, teachers, neighborhood residents and volunteers tend to show up on community days to eat, dig and garden. 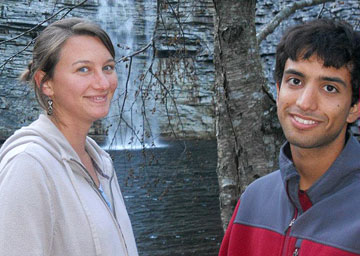 As garden interns, we help to make this possible. We work with students from kindergarten to fifth grade and with after-school classes. We hope to work with the teachers to integrate the garden into the school curriculum, going beyond the generic state-issued curriculum to demonstrate the garden's potential for critical thinking and outdoor and experiential learning.

Students take pride and ownership in their achievements, teaching their parents how to pollinate, start gardens at home and even daring to try arugula, okra, calabacitas and quesadillas de flor de calabaza, which they grew and prepared themselves. We enjoy working at schools to help children develop a connection to the food they eat. The Earth that nourishes us is what we value as crucial for environmental and social change.

It does not take long before the students start to make cultural and social justice connections. The students have connected what we have done in the garden with what their grandparents grow and use and with the struggles of César Chávez and the farm laborers.

*Mellor and de Olveira Domingues are United Methodists from the New York Annual (regional) Conference. They are students at the University of Arizona, in Tucson, and garden interns at the Urban Farm and Davis Bilingual Elementary School.