It’s mid-day worship in a trendy city neighborhood, and the sanctuary is swinging.

Beneath the warm glow of stained glass, people praise God with the driving beats of hip-hop and the bouncy rhythms of K-Pop. The thunder of an organ alternates with the jingle of tambourines. "Blessed Assurance" follows the blessing of dance. And when worshippers recite the Lord’s Prayer, they speak in too many languages to count.

This is Super Sunday, a special combined worship service of the oldest United Methodist congregation in Oslo, Norway, and one of the city’s newest, the growing International Methodist Church Oslo.

On this Sunday in May, the gathering is especially super. Nordic-Baltic Area Bishop Christian Alsted, whose area includes Norway, is the guest preacher. The bishop has brought along a delegation from the Connectional Table, a United Methodist leadership body that he chairs.

However, for the international congregation commonly called IMCO, the blend of cultures and worship styles is typical of any Sunday.

Some 15 nations from across Africa and Asia are represented among the church’s worshippers, said the Rev. Terje Nilsen. He is pastor of both Oslo’s first United Methodist church, the 152-year-old Methodistkirken På Grünerløkka, and the 5-year-old IMCO. 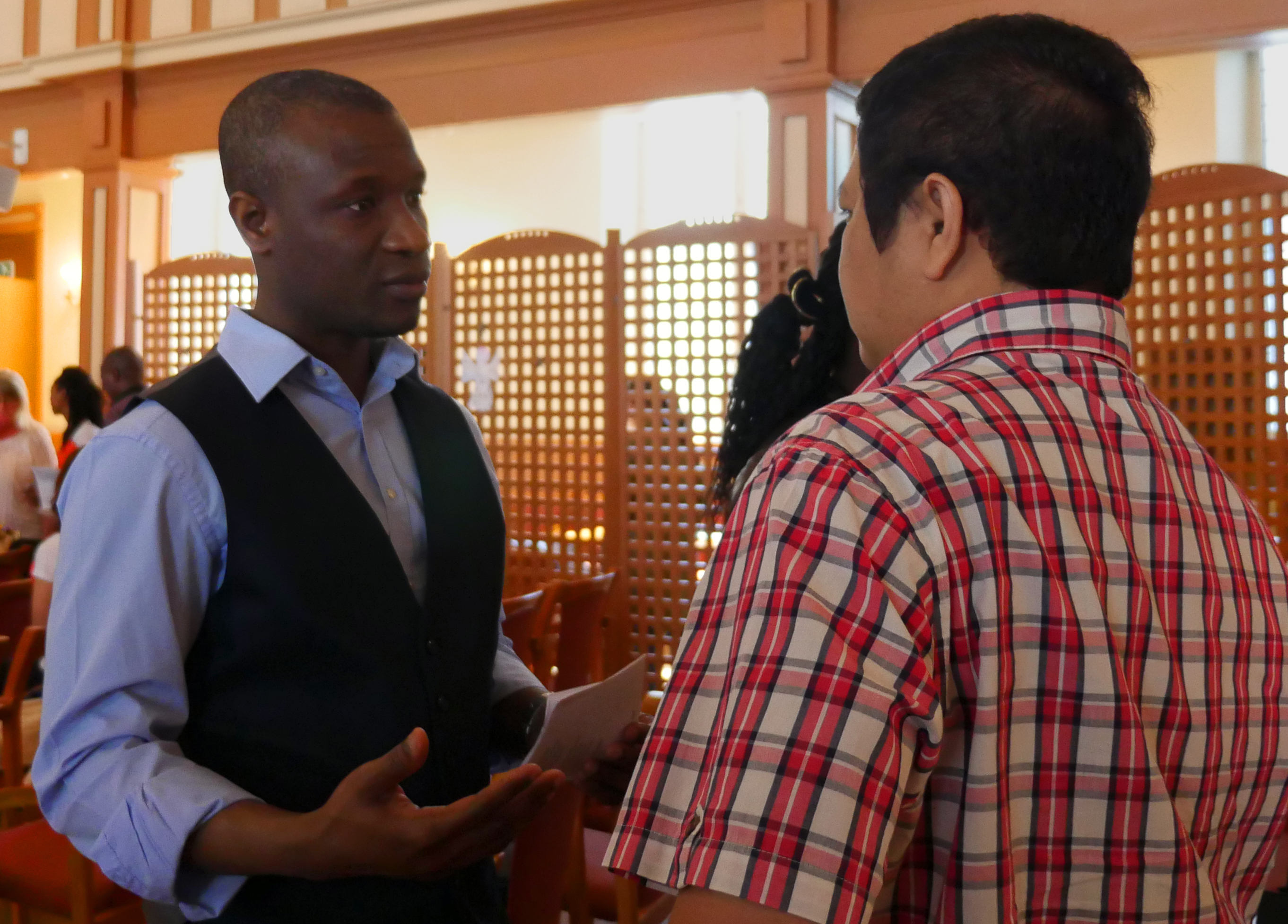 Victor Sekyere, one of the earliest members of International Methodist Church Oslo, talks to a fellow parishioner after worship. Sekyere, originally from Ghana, will be commissioned in June as a provisional elder in the Norway Annual Conference. Photo by Heather Hahn, UMNS

The older congregation, named for the central Oslo neighborhood where it’s located, planted five churches in the 19th century — three of which still worship today. The historic church now gladly shares its space with the new international congregation, which has grown from four worshippers to more than 100 today.

Nilsen said the older Norwegian-speaking congregation is teaching the English-speaking IMCO members about church administration and structure. “But I think it is more important that the traditional Norwegians see how it is possible to use more of modern worship songs, dance and rap to praise the Lord,” the pastor said.

Most Norwegian churches today struggle to keep younger members engaged, he said. “It is good for the Norwegians to see that church is alive.”

In many ways, IMCO is a microcosm of The United Methodist Church. Members’ worship styles, native languages, cultures and even theological perspectives differ. However, the parishioners stand united by a common faith in Christ, a common heritage in Wesley, and a common feeling that, miles away from their homelands, they’ve found a house of worship to call home.

“You look forward to it because it’s all about fellowship,” said Tebogo Uggedal, a member from South Africa. She arrived early for church Super Sunday so she could help prepare for one of the dances in worship.

“You actually enjoy the company of the people you go to church with, instead of just going to church and running out,” she said.

Sekyere, the son of a Methodist pastor in Ghana and a graduate of the Norwegian School of Theology, will soon be moving on. When the Norway Annual Conference meets June 22-25, Sekyere will be commissioned a provisional elder — making him the first African-born pastor in the conference.

He will lead a United Methodist church in Egersund, a town more than a six-hour drive away on Norway’s southwestern coast. However, he’ll take with him lessons gleaned from his experiences at IMCO.

“Not only do you see different people worshipping; you also get to learn how they understand God, how they started with Christianity,” he said. “It shapes me. It shapes a person if you are open to learn.”

He hopes to help create a space that, like IMCO, is Bible-centered and makes everyone feel welcome.

The Norway Conference began the process of planting the English-speaking IMCO in August 2008.

The project was part of the conference’s “renewed focus on creating new places for new people,” said the Rev. Vidar Sten Bjerkseth, who was superintendent of Norway’s Eastern District at the time. The district encompasses Oslo. 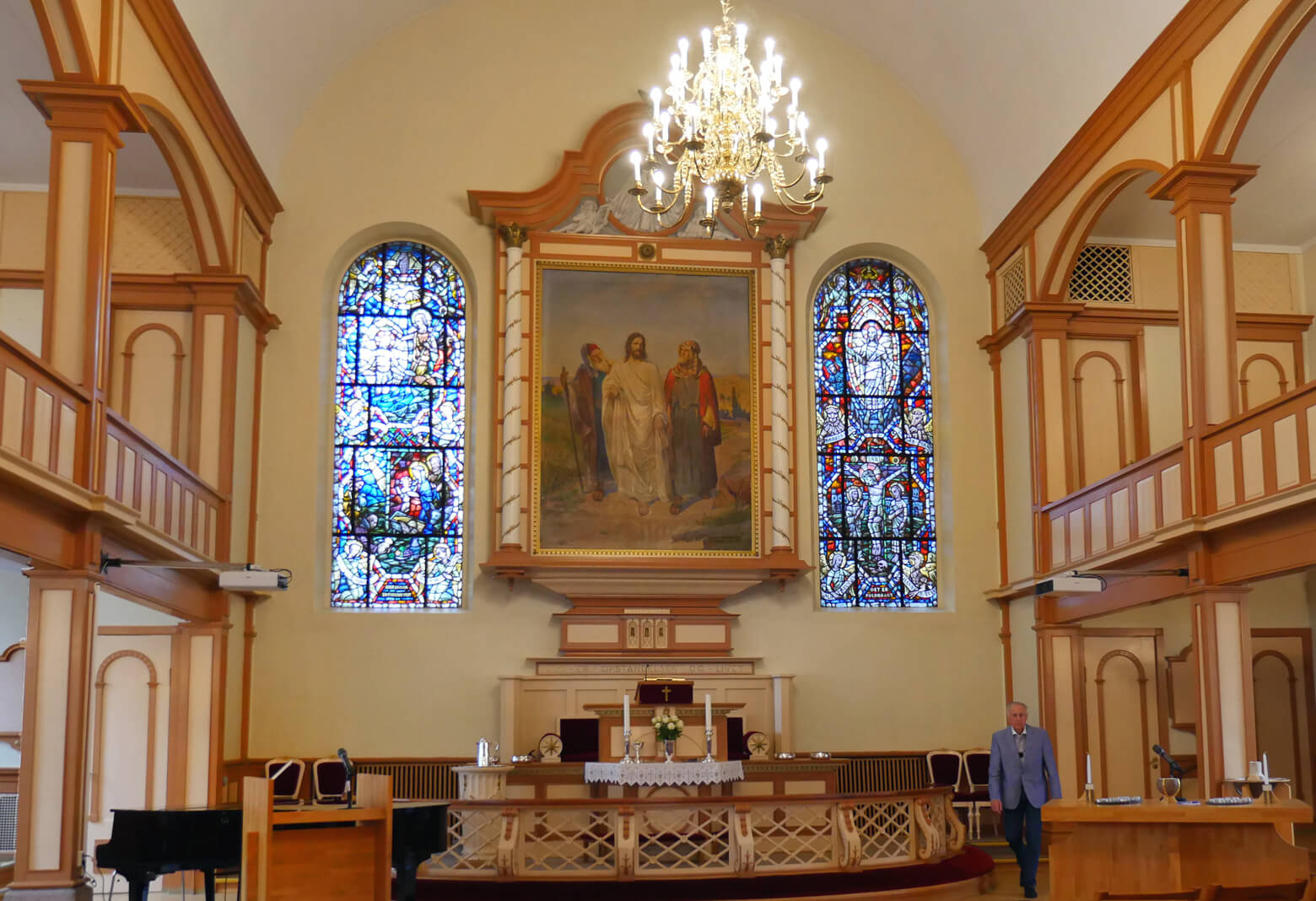 A portrait of the risen Christ, walking with two disciples on the road to Emmaus, hangs over the chancel shared by two United Methodist churches in Oslo, Norway. Photo by Heather Hahn, UMNS. Click to enlarge.

Conference leaders knew there were multiple Methodists from different countries living in Oslo as students, migrants or permanent residents, he said. However, the city’s existing three United Methodist churches weren’t making any inroads with their new neighbors, who were largely English speaking and had different worship traditions.

The Rev. Ki Sung Kim, a Korean-born pastor in the Norway Conference, took on the church-planting project and began by visiting students at two universities. At the first worship service in October 2008, Kim said he preached to four people — a couple from Kenya, a student from Nepal and his wife.

Kim decided to take another tack to get the church sailing. He began inviting students and others to international fellowship dinners and Bible studies each Thursday evening. At one point, the U.S. ambassador to Norway and other young diplomats attended. The congregation officially launched in October 2012.

“While I served IMCO for seven years, 89 people were received as its members by the grace of the Lord,” Kim said.

He has since moved to the United States, but the church continues to fulfill the conference’s vision.

The Rev. Øyvind Helliesen, the current district superintendent, estimates that Oslo has more than 250 migrant congregations. But each church largely serves only a single nationality. IMCO is highly unusual in being home to multiple ethnic groups.

Edward Ainza, a health-care worker from the Philippines, has been attending IMCO for a year and is already helping to lead the congregation’s music.

He said he and others keep returning to the church because “it’s our passion to praise God and serve as brothers and sisters together.”

Methodistkirken På Grünerløkka and IMCO have something to teach the larger denomination, said Nilsen, the pastor of both churches.

“We need to be open for newcomers, how they feel, experience and think,” he said. “Listen to others and … do not fight all the time for the traditional way. Our traditions once were something new and therefore it should be possible to create new ways of doing and new traditions.”