The United Methodist group charged with bridging divisions around homosexuality spent its first meeting mainly getting to know and trust each other but also took first steps toward possible outcomes.

The Commission on a Way Forward, which includes 32 United Methodists from nine countries, formed six working groups that will examine the question of how to do church together from multiple directions. These groups will do “homework” between meetings ─ speaking to experts, doing research and engaging in conversation.

“Together we worshipped, prayed, shared and dialogued,” she said. “There was a willingness and commitment to work together in deeper understanding of each other and the church. While I returned home exhausted and drained I am hopeful and joyfully look forward to continuing in the work we have begun together.”

“There is universal agreement, pretty much, that we are not there to talk about whether LGBTQ people will be included but how,” said Berryman, the executive director of Reconciling Ministries Network. His organization advocates for LGBTQ individuals to be included in all aspects of church life.

A bishop said the topic is difficult, but he drew encouragement from the spirit of the meeting.

“I think there is clear willingness of each member to participate and so far there is active participation of each member and this is encouraging,” Central Congo Area Bishop David Yemba said in a commission press release. He is one of three bishops serving as commission moderators. He and the other two moderators — West Virginia Area Bishop Sandra Steiner Ball and Florida Area Bishop Ken Carter — are helping to guide the discussion, but they do not have a vote on the commission’s work.

The commission’s first meeting on Jan. 23-26 in Atlanta was open only to the commission members, the three bishops serving as moderators and a few specially invited guests. The advocacy group Love Prevails protested not being allowed into the meeting. No reporters were present, although United Methodist News Service had asked to attend.

Carter said it was important that the first meeting be private so that the members of the commission could build trust.

“In a time of great division in the church, we want people to come to know each other and share deeply with each other,” Carter said. 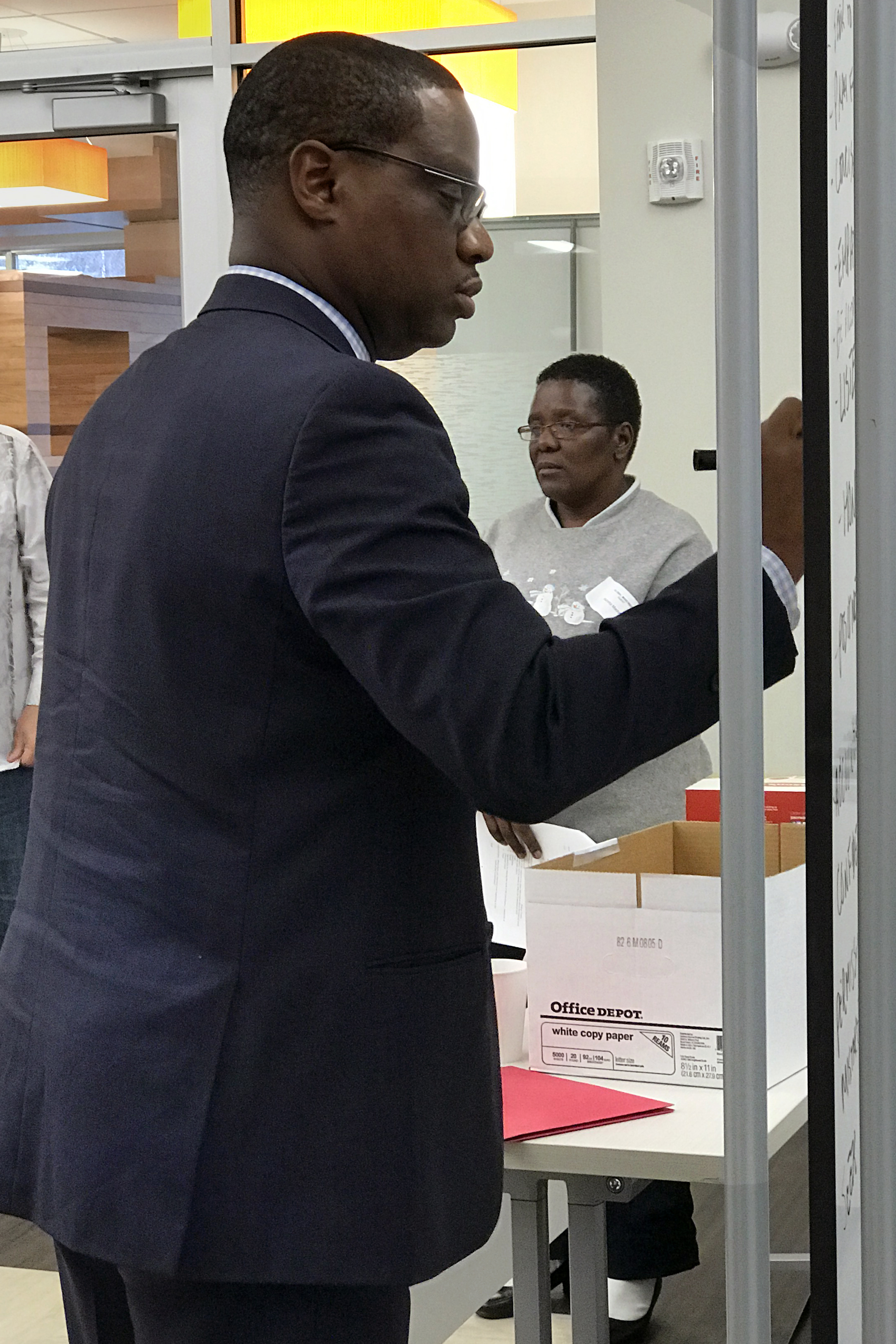 Scott Johnson writes on a board during the Jan. 23-26 meeting of the Commission on a Way Forward. Photo by Diane Degnan, United Methodist Communications

During the meeting, commission members also developed a covenant for their work together. This also included what members would not share in public.

“Through the development of the covenant, we were able to enter into deeper conversations with each other,” Carter said.

Carter said the commission members chose the groups on which they serve.

The commission’s working groups will focus on the following topics:

Previous United Methodist groups tasked with reviewing church teachings on homosexuality mainly explored theology and Scripture, Berryman said. This commission is looking at building relationships across cultures and determining how to live with each other amid theological diversity.

General Conference, the denomination’s top lawmaking body, authorized the formation of the commission in the wake of intensifying church debate about the status of LGBTQ individuals.

General Conference called on the commission to examine and possibly recommend changes to the denomination’s Book of Discipline, which since 1972 has stated, “the practice of homosexuality is incompatible with Christian teaching.” The bishops’ executive committee also has decided that the group will explore new ways of being a global church.

“Everybody knows that something has to change, and we’ve begun a conversation about what that might look like,” Berryman said. “We are in a very, very preliminary phase.”

Carter said the spirit of the first meeting “was hopeful.”

“Several commented on the extraordinary diversity of those gathered,” Carter said. “There was the sense that we are just beginning to walk together in a process that is complex and important.”

David N. Field, a commission member and coordinator of the Methodist e-Academy in Switzerland, said he is looking forward to future meetings both to continue the commission’s work and further develop new friendships.

“Differences were honestly dealt with,” Field said of the first meeting. “People made an effort to establish relationships with each other. There was lots of good humor. We all left with both a deep sense of the responsibility laid upon us but also with faith and hope.”

Eight more meetings are tentatively scheduled through early 2018. The next meeting will be Feb. 27-March 2 also in Atlanta.

Hahn is a multimedia news reporter for United Methodist News Service. Contact her at (615) 742-5470 or [email protected]. To subscribe to the free UMNS Daily Digest, sign up here.

An Africa University student and a Yale student have co-founded a company they hope can provide small clinics in African communities that have no health care.
Faith Stories

Yed Esaie Angoran, a leader in both The United Methodist Church and the country of Côte d’Ivoire, died of a heart attack.